Skip to main content Skip to search
Secondary menu
Home » Why is Turkey rushing to give citizenship to Syrians?

Why is Turkey rushing to give citizenship to Syrians? 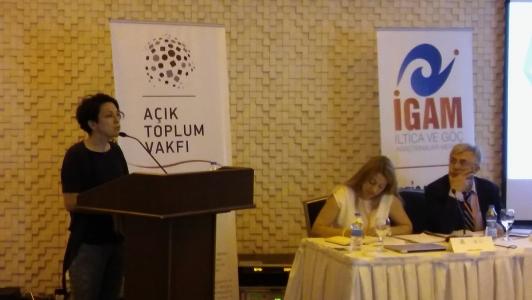 The Research Center on Asylum and Migration (IGAM) recently released a report titled “Challenges and Opportunities of Refugee Integration in Turkey.” Funded by the German Heinrich Böll Foundation, the report was prepared by Doğuş Şimşek from Istanbul’s Koç University and Metin Çorabatır, the UNHCR’s former spokesperson in Turkey who is currently heading IGAM.

At the press briefing yesterday, Şimşek and Çorabatır shared a chart they prepared “scoring” Turkey’s performance on providing Syrian refugees with fundamental needs like housing, education, economic self-sufficiency and employment. Unfortunately, there is not a single item where Turkey scores high.

In my own view, Turkey scores high in terms of welcoming Syrian refugees. But there is no such item in the report. Still, it is quite encouraging to see that two experts with field experience thought Turkey scored “medium” in health and education, two fundamental rights that refugees should have full access to.

Turkey does not feel bound by any international commitments, as it has introduced a geographical limitation to the 1951 Geneva Convention on refugees. Accordingly, Syrians and other nationals entering from east of Turkey are not granted refugee status.

In comparison with many Western countries that are going by the book - at least on paper - by trying to grant full access to fundamental rights but who have been overwhelmed by the flow and are taking measures to curb refugees coming, Turkey - which is not going by the book - has still done a relatively good job hosting Syrians fleeing war.

It therefore sounds a little irrelevant, and disproportionate to the current circumstances, for the writers of the IGAM report to top its list of recommendations with a call to lift Turkey’s geographical limitations, which the government does not intend to do.

This call, which effectively says “apply international standards instead of creating sui generis solutions like the ‘temporary protection status’ provided to Syrians,” comes at a time when most countries are unwilling to go by the book. Look at U.S. President Donald Trump’s recent decision on immigration, which defies all international norms and sets a dangerous precedent.

In such an environment, how realistic is it to tell the Turkish government that “full implementation of the 1951 Refugee Convention is urgent”?

I would have thought that call would likely be fruitless, especially considering the fact that the government barely listens to NGOs and shows little appetite for cooperating with them. But a recent news report has hinted that the government will go ahead with its plans to grant citizenship to Syrians, which makes me think otherwise.

According to daily Milliyet’s Tolga Şardan, the Interior Ministry is in the final stages of work to grant Turkish citizenship initially to 10,000 Syrians. If time permits, these new citizens will be able to vote in the April referendum.

According to Çorabatır, the 1951 Geneva Convention does not dictate granting citizenship to refugees as a responsibility of the host country. The UNHCR only encourages granting of citizenship in the long term.
The Milliyet report states that it will be mostly well-off Syrians that will be granted citizenship initially, meaning that the urgent needs of the most needy refugees will not be addressed.

In addition, as recalled by Çorabatır, Syria does not accept duel-citizenship. Even if it did, considering Turkey’s role in the Syrian civil war it would rather not welcome back those who got Turkish citizenship.
Amid efforts from Turkey and others to end the war and find a durable solution, why is Ankara rushing an initiative that would close the door to the return of certain Syrians?

Granting citizenship to Syrians just before the referendum on constitutional changes will fuel speculation that the government is doing it to increase its support base. Justified or not, this speculation will turn part of the public against Syrians, which is neither good for refugees nor good for the social fabric of a society already suffering from intense polarization.

So instead of granting selective citizenship to Syrians, which is also unfair to refugees from other countries who have been living in Turkey for decades, granting all refugees full status envisaged by the Geneva Convention would be far more preferable.
http://www.hurriyetdailynews.com/why-is-turkey-rushing-to-give-citizenship-to-syrians.aspx?pageID=449&nID=109225&NewsCatID=412