What will Netanyahu tell Trump? 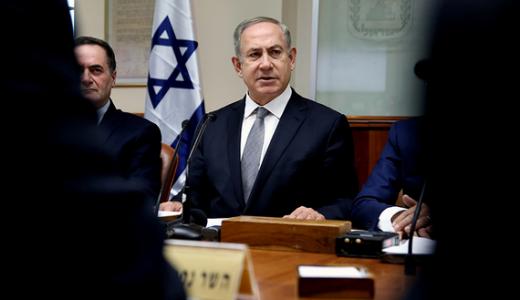 As Prime Minister Benjamin Netanyahu prepared to set off for his historic first meeting on Feb. 15 with US President Donald Trump, a big fight broke out in the Israeli right about the message and agenda that Netanyahu should present to the US president.

Standing on one side of the divide is HaBayit HaYehudi Chair Naftali Bennett, accompanied by a sizable group of right-wing Likud ministers, whom he tried to incite against the prime minister's compromising positions. On the opposing side is Netanyahu, who is much more realistic than Bennett but is afraid to be portrayed as a defeatist, who is reluctant to take advantage of these fortuitous circumstances to win historic achievements for the Israeli right from a supportive US president.
Summary

With combative coalition partners watching his every move, Prime Minister Benjamin Netanyahu might focus on the Iranian issue when meeting President Donald Trump, as this will serve him well in the Israeli public opinion.
Netanyahu has one clear advantage over Bennett. Unlike the chairman of HaBayit HaYehudi, Netanyahu has already spoken with Trump by phone, and Netanyahu’s people, particularly Mossad Director Yossi Cohen, have already met with Trump's team on more than one occasion. Netanyahu was very disappointed by what he heard about these meetings, but he recognizes that he is forced to align himself with the new reality. According to various political sources, Netanyahu has said in internal conversations that Israel must do everything it can to avoid a conflict with Trump, no matter what the cost. He knows that Trump is cut from a totally different cloth than former President Barack Obama or former presidential candidate Hillary Clinton. The new president does not feel himself obliged to the most basic rules or common values shared by Israel and the United States, and his reactions could be especially unanticipated and painful.

At Sunday's Security Cabinet meeting, Netanyahu told his ministers about a phone call he had with Trump on Jan. 22. He said the president asked him how he intended to advance the peace process with the Palestinians, upon which Netanyahu reiterated his commitment to a two-state solution. He noted, however, that it is the Palestinian side that refuses to budge on any issues and will not make any concessions whatsoever. According to an Israeli political source, Trump responded by telling Netanyahu that he hopes to reach an arrangement between Israel and the Palestinians, adding, "The Palestinians will have to make concessions too."

All of this openly conflicts with comments made by Bennett last weekend. Bennett warned that if a two-state solution is brought up in the course of Netanyahu's meeting with Trump, "the earth will shake." Bennett’s blunt threat was designed to avoid a deja vu of the 2015 elections. Then, Bennett lost a considerable part of his electorate to Netanyahu. He has no intention of ever letting that happen again.

Hovering in the background of this well-publicized conflict are the ongoing criminal investigations into the prime minister’s actions. Netanyahu has no more pressing interest than his efforts to avoid a criminal indictment, which would apparently put an end to his political career. He invests most of his energy in dealing with this, working round the clock on various levels to reinforce his hold on his post and to convince Attorney General Avichai Mandelblit and the public that replacing him now would be nothing less than first-rate national irresponsibility. That is why, during his meeting with Trump, Netanyahu will focus his agenda on issues that are far more existential and photogenic than the tangled Palestinian-Israeli conflict. He will talk about Iran, North Korea and Hezbollah. In these issues, Netanyahu and Trump share a similar ideology. The prime minister would therefore like to give the impression that he is the only person able to enlist the support of a bellicose US president to stop Iran and damage Hezbollah's capabilities.

Over the past decade, Netanyahu has become the symbol of the struggle against Iran. Now he hopes to portray himself again as the only person who can protect Israel from the Iranian threat. The question is whether Trump will play along with Netanyahu.

On Feb. 10, Trump gave an interview to Israel Hayom, the free newspaper funded by American casino mogul Sheldon Adelson. The interview took place just a few hours before Trump met with Adelson for a long, personal meeting. Trump's messages were hardly appealing to the leaders of the Israeli right. Despite everything he said during his campaign, the president now believes that new construction in the settlements could hinder the peace process and harm any chances of actually achieving peace. This constitutes a very sharp U-turn from the policies he advocated until now. Similarly, his highly publicized plans to move the US Embassy from Tel Aviv to Jerusalem has dropped off the agenda for now. Netanyahu hopes that Trump's statements about Iran will not suffer a similar fate.

Netanyahu will present Trump with a few proposals of his own. According to sources close to the prime minister, he will suggest the best way to track the implementation of the Iranian nuclear agreement and convert it into a tripwire, in the event that Iran violates the agreement at some point in the future. The Israeli assessment is that the Iranians will, in fact, violate the agreement in its later stages, once they become confident enough and its implementation is irreversible. Netanyahu will also ask the president to impose further sanctions on Iran, mainly in response to its continued activities encouraging terrorism and its ongoing tests and development of long-range ballistic missiles.

Netanyahu will focus on the relationship between Iran and Hezbollah, and he will try to persuade Trump to drive a wedge between Iran and Russia, arguing that it is in the utmost interest of Israel, the United States and the West. The test will be whether Iranian forces leave Syria and Hezbollah returns to Lebanon once the civil war is over. Israel has been keeping close tabs on Hezbollah, which has undergone a powerful historical shift over the past five years. It has gone from being a semi-clandestine terrorist group to a full-fledged army. When Iran was still subjected to international sanctions, the amount of money it budgeted to support Hezbollah was reduced to a minimum, dropping from $800 million to just $200 million per year. There were even years in which the Iranians transferred no money to Hezbollah, causing real harm to the movement's finances. Now there is a big fight inside Iran between the Islamic Revolutionary Guard Corps, which wants to restore the Hezbollah budget to its glory days, and President Hassan Rouhani and his people, who are postponing this support so that they can rehabilitate the Iranian economy and improve the lives of their own citizens.

These are the pressing issues that Netanyahu will put before Trump, hoping to get as much as he can out of the president. Several of the prime minister's advisers have already told him to lower his expectations and not to pin too much hope on Trump. At this particular point, Netanyahu will make do with a few statements, some photo ops and a presidential hug that is as photogenic as possible. Right now, Netanyahu's real war is not with Hezbollah or Syria, but with Mandelblit, who must decide whether to indict Netanyahu and whose office is located in East Jerusalem, of all places.