Skip to main content Skip to search
Secondary menu
Home » What is happening in the Turkish military? 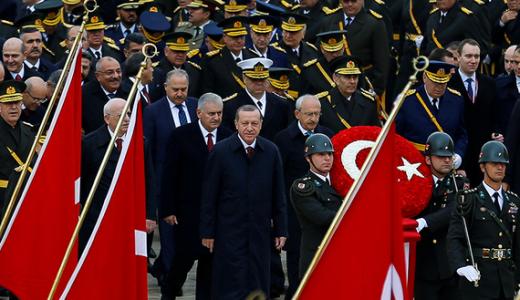 A Hurriyet article suggesting ongoing rumblings in the military appear to have been borne out by the official responses to it.
The coup attempt on the night of July 15, 2016, by a group of pro-Gulenist soldiers while other soldiers passively looked on has of course had various implications. A country pursuing negotiations for accession to the European Union and engaged in demilitarizing since 2003 was showing signs of reverting to interventionist tutelage driven by military mindsets and traditions.

In the aftermath of the attempted coup, military-civilian relations have become so sensitive they cannot be publicly debated. One could land in serious trouble if heard to ask, “Is there a split in the military?” or “Are civilian-military relations stable?” Such questions are, nevertheless, on the table and are as important as ever. A Feb. 25 report by Turkish journalism’s flagship daily, Hurriyet, triggered a crisis among the government, the military and the media highlighting the sensitivity of the issue.

The report featured responses by Chief of the General Staff Hulusi Akar to seven criticisms of his actions. No sources were cited by name, but it was clear that they were from inside headquarters, including commanders, and that their comments expressing their displeasure with Akar were published with their consent. Akar's alleged silence in the face of the government's decision to lift the long-established headscarf ban for women in the military was a particular source of discontent, as were his relations with the government and the US military.

The political establishment reacted strongly to the report, printed under the banner headline, “Headquarters Unease.” Government spokesman Numan Kurtulmus said, “Everyone must watch they say. It is not possible to steer the Turkish Armed Forces and the government with banner headlines.” President Recep Tayyip Erdogan, with Akar, seated beside him, threatened the media, charging, “They will pay heavily for this.” Apparently in the wake of the failed coup, the report set nerves on edge over concerns that high-ranking members of the military remained unhappy with the government.

The consequences that followed Erdogan’s threat were immediate. Hurriyet felt sufficiently pressured to fire editor-in-chief Sedat Ergin, and the newspaper printed an apology for the report and promised an investigation. Assessing three elements in this turn of events helps in making sense of it.

The first element is the government’s reaction, which was justified and understandable. Democratic states do not tolerate anonymous declarations from military authorities pertaining to political life. One cannot ignore Turkey’s history. For many years, especially after the military intervention of Feb. 28, 1997, high-ranking officers, frequently the chief of staff, acted as instruments of pressure on the country’s politics through leaks and unsourced statements to the media. Discreet warnings from the military became part and parcel of Turkey's political life. “Headquarters disturbed” and “military uneasy” are well-known and understood expressions. The issue is not one only of military-civilian relations but media-military relations as well.

The second element involves “selective criticism.” The government chose to attack the media and ignore the situation among the high command, falling back on the classic charge that “they” want to spoil political-military relations, without identifying who “they” is. Nevertheless, nobody should deny that Akar's posture has caused displeasure behind closed doors and probably generated warnings from among the ranks.

The third element, perhaps the most critical one, is the background of the report's “serving of notice” about grumbling in the military ranks. The question that arises is why high-level commanders are discontent, including Akar, who is unhappy with his internal critics. More importantly, who or what has led them to feel that way?

The Hurriyet report indicated that the members of the military high command who spoke out were not annoyed solely at the political echelons. The real cause of their irritation was the chief of the General Staff. In other words, the report on “headquarters unease” reflected actual unrest in the military. The reaction by the military command clearly confirmed the discord within.

Three main issues — which Hurriyet divided into seven categories — have reportedly been disturbing the military command. The first is Akar's close relations with the government, for example, joining Erdogan on trips, and the political role he plays that supports the policies of the government, such as triggering tensions with Greece over the Aegean.

The second issue is Akar's attitude toward the US military. Nationalist officers targeted by Gulenists during the coup and who believe that the United States was behind the failed attempt are not happy. These officers resent Akar’s submissive relations with the US military.

The third issue is the lifting of the ban on headscarves for female military personnel. The military, rooted in secularism, had long treated wearing headscarves as a symbol of Islamization, and for decades disallowed them. In late February, the Defense Ministry, at the behest of the political leadership, abolished this prohibition for female officers and noncommissioned officers. To the traditional military, the change in policy on headscarves looks like a direct challenge to the military and reflects a change in military-civilian relations.

How should one interpret these developments? The criticisms directed at Akar point to an ongoing debate in the military. The key point of contention appears to be the lifting of the ban on headscarves. Akar, while briefing the Hurriyet writer, felt the need to emphasize, saying, “Headquarters was not consulted about the decision to lift the ban on headscarves, and the General Staff had no responsibility and input in the matter.” It is therefore reasonable to assume that there was a strong, negative reaction in the military about lifting of the ban, and Akar was accused of simply going along with the government instead of resisting politicians imposing the change.

Undoubtedly the chief of the General Staff, while trying to address the trauma the military had suffered with the July 15 coup, is stuck between intense pressure by the government and dissatisfaction among the military ranks. That Akar’s alliance with the government involves helping to cope with Kurdish issues and purging the army and the state of Gulenists is not effective in convincing the military ranks to give him the benefit of the doubt for the moment.

The timing and style of the lifting of the ban on headscarves, which can actually be interpreted as a democratic step, have nevertheless shifted some critical balances and prompted concern in the army about the government’s intention to rewrite political-military relations.