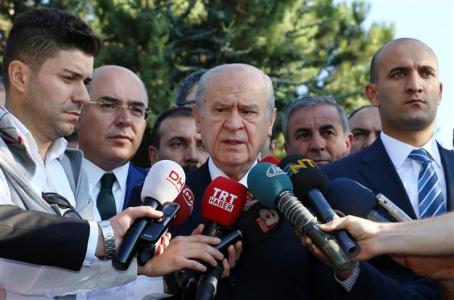 Murat Yektin
Weaker than expected support from within the Nationalist Movement Party (MHP) for the executive presidency system in the April 16 referendum is turning the ruling Justice and Development Party’s (AK Parti) eyes back to Kurdish votes, recent developments in the campaign suggest.

When Prime Minister Binali Yıldırım managed to acquire the support of MHP leader Devlet Bahçeli for the “yes” campaign, the AK Parti campaign started with a surprisingly hard-line nationalist tone. The AK Parti rhetoric had highlighted the reinstatement of the death penalty, as the MHP has been doing for years, amid the repeated arrest of MPs from the Kurdish-oriented Peoples’ Democratic Party (HDP), including popular co-chair Selahattin Demirtaş; vitriol at the HDP for being a tool of the outlawed Kurdistan Workers’ Party (PKK); and pledges not to re-launch peace talks but to demand the unconditional surrender of the PKK.

As time went by, it was understood that the crack in the MHP was more serious than thought, as a number of outspoken MHP deputies said they would campaign for the “no” campaign despite the will of their leader, even at the cost of expulsion from the party. When they appear in the media, those reports make Bahçeli upset, and a Kurdish AK Parti source told me on the phone recently that they had not seen even one reliable poll that estimated the “yes” support from within the MHP to be more than 35 percent.

That has troubled the original calculations of the AK Parti for the April 16 estimates which was based on the Nov. 1, 2015, parliamentary elections. On Nov. 1, the AK Parti received 49.5 percent of the votes and the MHP got 10.8. The simple arithmetic was that all voters would say “yes,” leading to 60.3 percent. That might be the logic behind President Tayyip Erdoğan’s reply to Hakan Çelik of CNN Türk on March 23 when he said he expected “more than 52” but would prefer the result “to be crowned with 60” percent; 52 being the support Erdoğan got for himself in the 2014 presidential elections. Even with a “reasonable” desertion from the MHP, the “yes” result would have been guaranteed.

But there were also other factors. For example, the exaggerated rhetoric against the HDP, when combined with the massive security operations causing considerable collateral damage in the east and southeast against the PKK, might have alienated a certain portion of Kurdish AK Parti voters. For the sake of the MHP support, that could be tolerated. But as the MHP estimates started to be reported to Erdoğan and Yıldırım, they started to turn their eyes back to Kurdish support.

Another development was the PKK stance and the HDP stance regarding the referendum. There were expectations that both could boycott the referendum claiming that the outcome, regardless of whether it is a “yes” or “no,” would not make any difference to the “Kurdish cause.” When the PKK announced in strong words and threats that boycotting the election would serve the rulers of the Turkish state and that their vote would be a “no,” the barometer started to move to the other side.

The visit of Massoud Barzani, the leader of the Iraq’s Kurdistan Regional Government (KRG), to Ankara on Feb. 26 was an important milestone for that shift of attention, as well as the joint stance against the PKK and the Islamic State of Iraq and Levant (ISIL), or DAESH, both in Iraq and in Syria. The AK Parti anticipates “quality” support from Barzani for its “yes” campaign, since his influence on traditionalist and religious Kurdish voters might not change much on the arithmetic side, but he still retains important psychological and moral value.

Bahçeli strongly reacted to the hoisting of the KRG flag in Ankara during Barzani’s talks with Erdoğan and Yıldırım, but did not continue that as it could be expected, possibly due to the cost analysis for him and his party if the outcome would be a “no.”

The AK Parti’s next step was a “meeting with opinion leaders from the east and southeast” on March 21 on Nevruz day in Istanbul, which has the biggest Kurdish population in Turkey and the world as well. Then Yıldırım staged a referendum campaign rally in the southeast city of Batman on March 23 and asked for a “yes” vote in Kurdish in a move praised by Erdoğan in his CNN Türk interview. Now Erdoğan and Yıldırım are organizing a rally in Diyarbakır, southeast Turkey, on April 1.

The AK Parti hopes that with this move, it can win the hearts and minds of Kurdish voters who distanced themselves because of the cooperation with the MHP. That will be an interesting venture to watch as Turkey has slightly more than 20 days left until it goes to the ballot box.
http://www.hurriyetdailynews.com/weak-mhp-support-turns-akps-eyes-to-kurdish-votes.aspx?pageID=449&nID=111239&NewsCatID=409