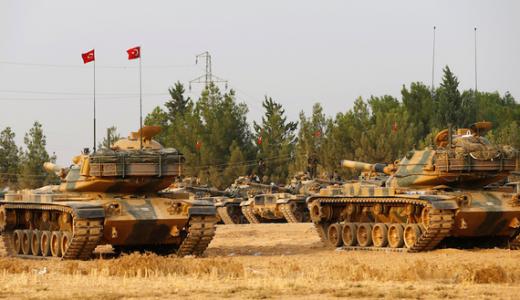 The arrests are in line with a massive crackdown on Salafi and terrorist networks in Turkey this year. On Feb. 5-6, 820 alleged IS sympathizers and operatives were arrested in 29 cities across Turkey. In all of 2016, Turkish police detained and charged 2,936 people on charges of being Salafi or jihadi terrorists.

Metin Gurcan explains that the “main reason” for the crackdown “is the political climate in Turkey, which is preparing for a constitutional amendment referendum in April that would greatly expand the president's power. The Justice and Development Party (AKP) government is very much aware of the shock effect of the Istanbul nightclub attack in the first hours of the new year. That attack heightened Turkish people's fear of IS and what it can do. The government was harshly criticized for the country’s intelligence and security flaws. IS-initiated, extreme Salafi violence on the eve of the referendum would further frighten the public and expose the government's weaknesses, probably boosting the 'no' votes.”

While the crackdown on IS is unambiguous, Turkey’s objectives are complicated by its ties to what Gurcan refers to as “frenemy” jihadis — those linked to Jabhat Fatah al-Sham, formerly known as Jabhat al-Nusra, al-Qaeda’s powerful Syrian affiliate, as well as other "moderate” Syrian armed groups that are directly supported by Turkey.

Gurcan adds, “Ankara’s most difficult challenge in overcoming the jihadi movement in Syria is that there are no changing loyalties at the level of notables and leaders, but there is a constant movement of foot soldiers changing their affiliations.”

For example, Abdulkadir Masharipov, the terrorist implicated in the Istanbul nightclub attack, had previously been affiliated with so-called moderate groups. Gurcan writes, “A careful study of the backgrounds of Salafi foot soldiers shows that they — especially those with Central Asian, Uighur and Russian backgrounds — have been in contact with many IS, Jabhat Fatah al-Sham and moderate groups. This makes tracking them down and keeping an eye on them particularly difficult. For example, how can Ankara really trust a Central Asian or Uighur militant now serving with the Sultan Murad Brigade alongside Turkish soldiers in Syria, but who earlier had served with groups affiliated with Jabhat Fatah al-Sham and even IS? Could IS convince these ‘moderate militants,’ who have easy access to Turkey, to carry out terror acts there?”

Pompeo’s visit to Turkey was greeted with some fanfare, as it occurred just two days after a phone call between US President Donald Trump and Turkish President Recep Tayyip Erdogan, and was the CIA director’s first official foreign visit. While the White House readout of the Trump-Erdogan call was vague, Turkish official sources claimed that Trump and Erdogan had agreed on joint action in the campaigns against IS in Raqqa and al-Bab. The United States, up to now, has been depending almost completely on the Syrian Democratic Forces (SDF) for the first wave of the assault on Raqqa. The SDF is made up primarily of Syrian Kurdish People’s Protection Units (YPG) forces. Turkey insists that the United States end its support for the YPG, which it considers a terrorist organization linked to the Kurdistan Workers Party and equivalent to IS.

Semih Idiz explains that Turkey is increasingly desperate as it finds itself even further sidelined in Syria. “Ankara is deeply perturbed by Trump's proposal for safe zones in Syria, despite the fact that Turkey has been calling for such a zone in the north of the country for a long time,” Idiz writes. “Some see Trump's proposal as a prelude to granting the Kurds their own region. Ankara is also displeased by Moscow’s offer of autonomy for the Syrian Kurds under a unified Syria.”

Idiz concludes, “The upshot of all this is that Ankara is even more defensive today than it was in the past with regard to Russian and US plans for Syria, even though it appears to be cooperating closely with Moscow and has not allowed its anger with Washington to boil over into a serious diplomatic crisis between the two countries. … Given its continuing inability to alter the course of events in Syria, diplomats fear that Ankara may have decided to play a reactive and obstructive role in the Syrian peace talks, rather than a positive and proactive one. If this is indeed the case, it is not immediately evident that this will provide Ankara with what it wants. To the contrary, it could leave Turkey on the sidelines again, as the powers it is unable to match continue to determine developments in Syria.”

Amed Dicle, reporting from Gaziantep, writes that Syrian Kurdish parties are concurrently weighing both military operations in Raqqa and scenarios for federalism in postwar Syria.

“Raqqa isn't northern Syria's and Rojava's only agenda,” Dicle writes. “The Astana and Geneva talks are also closely followed here. And then there's the draft constitution prepared by Russia. Russia's draft is neither rejected nor accepted — it is considered to be a draft that should be discussed. It is taken as an insufficient step, but a first one by international powers. Geneva and Astana meetings haven't generated hope for a resolution yet. Russia took a step by preparing this draft. Russia suggests autonomy for the Kurds, but the Kurds think their issues will be solved not through autonomy, but through a democratic, federal Syria. In Russia's draft, other peoples and faiths outside of the Kurds have been ignored. That is also seen as a flaw. But it is important that Kurdish rights are mentioned in a document for the first time.”

Dicle adds that Turkey is bogged down in al-Bab and may be limited in its capacity for further military operations. “What's happening there [al-Bab] is generally perceived as a fiasco. This is a useful reminder: Erdogan invaded the Shehba region to the north of Aleppo because of his anti-Kurdish sentiment and his ambition to prevent the Kurds from attaining a status in Syria. They took Jarablus and other places from IS without much fighting. But now, Erdogan's plans appear to be failing at al-Bab. … The Erdogan administration first said they would create a buffer zone from IS 20 kilometers (12 miles) deep after they took Jarablus and Dabiq. But their goals turned out to be different. Forces in the region saw that Erdogan was only pursuing his own agenda there. That is why the FSA [Free Syrian Army], his allies at al-Bab, are upset with Erdogan. They think they have been sold out in Aleppo. Cracks in the alliance between the FSA and Erdogan will surface soon.”