Turkey scrambles to cut its losses in Syria 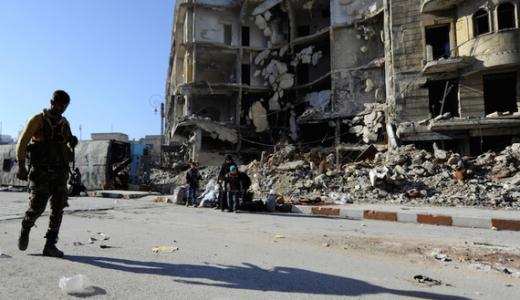 Turkey presses for reset with Russia

Reports that “Turkey’s outsize ambitions in Syria lie in shreds as forces loyal to President Bashar al-Assad press on to assert control over the rebel strongholds that remain in Aleppo.”SummaryTurkey’s Syria policies "lie in shreds"; Syrian Kurds coordinate with government forces in Aleppo; would Russia support federalism in Syria?

This column wrote last week that Turkish President Recep Tayyip Erdogan’s Syria policies hit a dead end in Aleppo. Zaman picks up this theme, noting a near-frantic desire by Ankara for a reset in Turkish-Russian ties, including a visit by Prime Minister Binali Yildirim to Russia Dec. 6.

“Until recently, most pundits had reckoned that Turkey would not make any dramatic changes to its Syria policy until a new administration takes office in Washington,” Zaman writes. “This, however, was premised on the Democratic presidential candidate, Hillary Clinton, who echoed Turkey’s calls for a no-fly zone in Syria, winning the election. President-elect Trump, on the other hand, has voiced deep skepticism about the rebels, prompting Turkey to consider cutting its losses.”

Zaman continues, “The latest developments in Aleppo suggest that some kind of understanding has been reached, with Turkey reportedly mediating on behalf of the rebels and their families for their withdrawal to Idlib. Ankara is in a hurry because of its paranoia over the Syrian Kurdish statelet it sees emerging along its border. It is desperate to stop the Syrian Kurdish People’s Protection Units (YPG) from physically linking all the cantons under its control. This, in turn, means preventing the YPG from taking the town of al-Bab from the Islamic State and also striking a deal with Russia, and by extension with the Assad regime, presumably at the Syrian Kurds’ expense.”

Berzan Iso writes, “Developments in al-Bab are linked to clashes in Aleppo. Turkey is reportedly transferring opposition fighters withdrawn from Damascus, Homs and Aleppo to the al-Bab region to form a paramilitary force under its control. Turkey sees control of al-Bab as a key for its ruling Justice and Development Party to have a say in the future of Syria and to prove the futility of Kurdish aspirations to form and control a corridor along the Turkish border. Both the United States, which supports Turkey, and Russia, which gave Turkey the green light to advance on al-Bab, are suspicious of Turkish President Recep Tayyip Erdogan and his intentions. Russia, which supports Syrian President Bashar al-Assad, allowed the Kurdish People's Protection Units (YPG) to advance toward al-Bab in between the Turkish Armed Forces (TSK) and Assad's troops. This enabled YPG-SDF fighters to create a de facto buffer zone between the Turkish forces and the Syrian army.”

Iso, reporting from Arima, Syria, adds, “Turkey is hindering the fight against IS,” based on comments by Manbij Military Council spokesman Shervan Dervish. “The area the SDF [Syrian Democratic Forces] saved from IS, with the support of the international coalition, is under attack by Turkey — a member of that coalition.”

Iso concludes that “another problem is Turkey’s inability to impose its rule and achieve stability, thus leaving the people at the mercy of the Islamic militant groups Jabhat Fatah al-Sham and Ahrar al-Sham. As long as the Syrian army needs al-Bab to recapture Aleppo, Turkey won’t be able to take the risk of capturing al-Bab. Syria’s defense industry’s main components and the biggest international airport are just south of al-Bab.”

Syrian Kurds caught in the middle

Fehim Tastekin writes, “Common sentiment is that the Kurds are now at a critical threshold of relations with the Damascus regime, and the outcome could be cooperation or, just as easily, combat.”

Both Syrian government forces and YPG fighters appear to have coordinated their assault on armed groups that had seized the Sheikh Maksoud neighborhood of Aleppo. In September, Russia had sought to broker an understanding between the Syrian government and Kurdish groups in advance of the assault on Aleppo, as reported by Mahmut Bozarslan for Al-Monitor.

Tastekin reports that according to Syrian Kurdish sources “the meeting [in September] did not produce an agreement and that there have been no more contacts with Russia. The Kurds say it is important for them to maintain contact with Russia and the regime of Syrian President Bashar al-Assad to keep Afrin and Sheikh Maksoud from turning into deadly war zones. This apparent coordination between the Syrian regime and the Kurdish People's Protection Units (YPG) against armed groups that were keeping Sheikh Maksoud under steady fire have prompted comments about ‘Kurdish-regime cooperation.’ But it is not that simple. What we have is friendship and enmity coexisting.”

“There is also talk of Syrian army cooperation with the Kurds regarding al-Bab, Turkey’s primary target in its Operation Euphrates Shield,” Tastekin writes. “Kurdish-led Syrian Democratic Forces (SDF) want to turn the zone between Manbij and Afrin into a safe zone for the Kurds. The Turkish army is trying to thwart that goal. Some observers interpreted the Syrian army’s shelling of Turkish-supported groups advancing to al-Bab as signaling the regime’s support for the Kurds.”

Cengiz Candar writes that at a recent conference, Salih Muslim, the leader of the PYD, “was as vague as he could be” about the next steps. Candar reports that Muslim’s “one recurring theme was the importance of the Kurdish self-rule model in northern Syria. The (involuntary) absence of the PYD at the peace talks in Geneva, he claimed, was the main reason for their failure. If the Kurds had been properly represented at Geneva I and Geneva II, then everything would be much different today. Thus, in Muslim’s eyes, acknowledgment of Kurdish self-rule is essential for a peaceful resolution of the Syrian conflict.”

Maxim Suchkov writes, “Moscow reaffirmed its commitment to the ‘unity, independence and territorial integrity’ of Syria as ‘a secular, democratic and pluralistic state,’ where all ethnic groups and religious denominations will live ‘in peace and security and enjoy equal rights and opportunities.’”

Suchkov adds, “This wording gives a sense of what the Kremlin is looking for at the end of the day, and what its starting negotiation position will be once the ‘fighting phase’ is over. It is also designed to annul allegations that Russia is considering the partition of Syria — even though such a posture does not technically prevent Moscow from advocating for a federalization if such an option is ever on the table.”