Turkey does not need a second diplomatic assassination 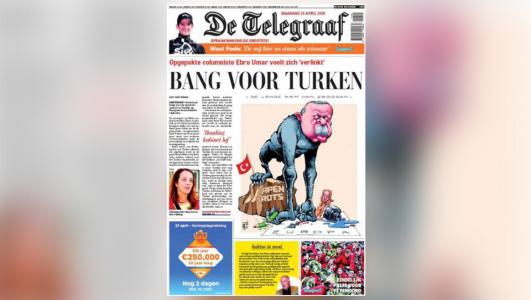 Barcin Yinanc
It goes without saying that every Western diplomatic mission in Turkey must have reviewed security measures around their compounds - not only after intensified threats from the Islamic State of Iraq and the Levant (ISIL) but also after the failed July 15 coup, which saw a rise in anti–Western feelings here.

While some might have felt the need to reinforce security, some countries must have been reluctant to respond to these demands for an additional budget due to financial constraints.

Suppose the country in question is the Netherlands and there is a demand for an additional budget to increase the protection of its diplomatic missions. While allocating the resources, it would not have been too difficult for the government in The Hague to dismiss requests from Turkey.

“We are allies with Turkey,” the Dutch decision-maker probably would have. “We are partners in NATO. We are among the top foreign investors in Turkey. We have a satisfactory level of cooperation against terror, especially when it comes to foreign fighters. In addition, Turkey has a huge security apparatus.”

However, today the same Dutch decision-maker might have second thoughts about these positive arguments to convince the taxpayers that Dutch diplomats are safe in Turkey and there is thus no need for additional spending.

Some may think it should be the responsibility of the Dutch government to take any additional security measures. But in fact Turkey is responsible for the lives of all diplomats that are present in its territory. Taking the issue lightly will have dire consequences.

That lesson should have been learned after the assassination of the late Russian ambassador, Andrey Karlov, which happened only three months ago.

According to a report in daily Milliyet, the Russian Embassy in Ankara had asked several times for increased security measures at all of its diplomatic missions in Turkey just a few days prior to the assassination. Worried by anti-Russia protests in the country - as Ankara-Moscow relations had still not been fully normalized at the time - the Russian Embassy sent four formal requests to the Turkish Foreign Ministry between Dec. 7 and Dec. 19, when the ambassador was killed: It sent one on Dec. 7, two on Dec. 12, and one on Dec. 15.

The Foreign Ministry immediately informed the Ankara Governor’s Office and measures were reportedly taken in Ankara and elsewhere. However, these new measures were aimed at strengthening the security of Russian diplomatic compounds and their surrounding areas, and Karlov was unfortunately killed while attending an event at a gallery in the center of Ankara.

Some might say this was a sui generis case, as Karlov was killed by an off-duty police officer. Still, the fact remains that the Turkish state failed to protect the ambassador, which will remain a black stain on Turkey’s reputation.

We do not need another taint. It is perfectly normal for Turks to demonstrate in front of the Dutch consulate in Istanbul, but it is hugely worrying to see that police were unable to prevent an intruder from entering the consulate compound, changing the flag from a Dutch to a Turkish flag. That man could have harmed those present in the building, and let’s not forget that all entry and exit to and from the consulate was supposed to have been stopped for security reasons.

What would have happened if the intruder had succeeded entering the consulate, harming the Dutch consul general and his wife, who were effectively hostages in their own building?

It is scandalous to suggest that this act was carried out by someone from inside the consulate, and it is even more worrying that this is being claimed by people close to government circles.

Turkey is not a banana republic. If the Netherlands thinks it can set up a scenario to change the Dutch flag with a Turkish one - while making it look like it was done by an outside intruder - then Turkish officials should uncover this farce.

If Turkish officials cannot do so, then figures close to the government should stop making such unsubstantiated claims that do indeed make Turkey look like a banana republic.