Turkey boasts no. 6 diplomatic network in the world 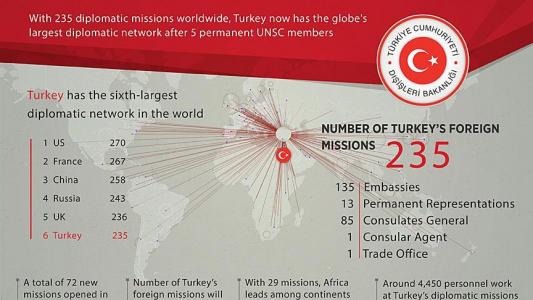 The index published by the Australia-based Lowy Institute for International Policy showed that Turkey has the largest number of diplomatic missions abroad, following the five permanent members of the UN Security Council.

According to the figures compiled by Anadolu Agency, the country currently has a total of 235 foreign missions, both embassies and consulates.

In 2002, when the ruling Justice and Development (AK) Party came to power, Turkey had 163 diplomatic missions abroad.

Under Turkey’s active foreign police, a total of 72 new missions were opened in the past 14 years.

According to Foreign Ministry sources, 24 new missions are in the pipeline and are expected to open soon.

But with its 24 new missions, Turkey could top the U.K.

Ankara’s outreach towards Africa led Turkey to open 29 new missions on the continent. Africa got the largest number of new missions in the past decade.

The sources confirmed that around 4,450 personnel work at Turkey’s diplomatic missions abroad at a variety of posts.