Skip to main content Skip to search
Secondary menu
Home » Turkey’s Erdogan has thin skin, and it keeps getting thinner

Turkey’s Erdogan has thin skin, and it keeps getting thinner 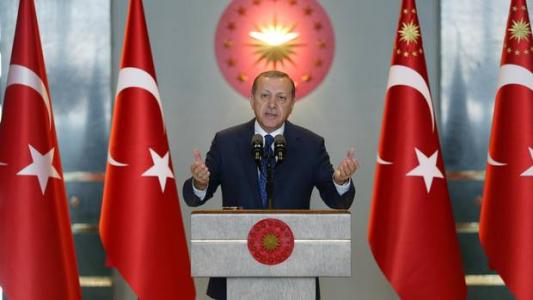 Globe editorial:
The Globe and Mail
Last year, President Recep Tayyip Erdogan of Turkey demanded that the German courts prosecute an admittedly scurrilous German comedian (goats were mentioned) for the crime of lèse-majesté, that is, insulting a head of state.

At the time, it seemed comically quaint, though not to Mr. Erdogan himself. The German government and courts managed not to make it a diplomatic cause célèbre while at the same time refusing the Turkish autocrat’s absurd request.

Ece Heper, however, does not have the same advantages. She is a dual Canadian-Turkish citizen who normally lives in southern Ontario, but who has been visiting Turkey since November.

In a Facebook comment she posted while in Turkey, she accused Mr. Erdogan of jailing journalists who suggest that Turkey has been supporting the Islamic State.

Back in Canada, such a remark would only have been noticed by Ms. Heper’s friends and acquaintances. But these days, in a Turkish democracy overthrown by Mr. Erdogan, the government is monitoring people’s thoughts. Ms. Heper has consequently been arrested and charged with insulting Turkey’s head of state.

If Ms. Heper is convicted of this “crime” – a crime that should have been repealed long ago – she may be in prison for as many as three years.

She is getting help from Canada’s consular services, which means she is at least slightly better off than thousands of Turks who do not have dual citizenship and have also been charged with insulting the delicate flower that is Mr. Erdogan. But her situation is still dire, and a sign of how undemocratic Turkey has become.

It’s been a while since it was possible to hope that Mr. Erdogan’s party would become the Muslim equivalent of a European-style Christian Democratic party. Instead, the party’s persecution of real and alleged coup plotters – tens of thousands – proceeds apace. Freedom of expression has been outlawed in Turkey, and now that fact has caught a Canadian woman in Mr. Erdogan’s games.

Canada will press Turkey for Ms. Heper’s release. Perhaps if consular officials refer to Mr. Erdogan as “Your Royal Highness,” they will get quicker results.