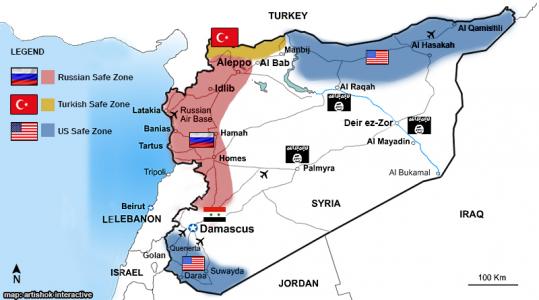 DEBKAfile DEBKA Weekly
Syria stands on the threshold of dramatic changes that will directly impact on the strategic and military situation along the Syrian borders with Israel and Jordan, DEBKAfile reports exclusively. They derive from a deal struck this week by US President Donald Trump and Russian President Vladimir Putin to establish US, Russian and Turkish security zones in Syria.

This scheme will transfer military control of the country to those three powers. Each of them will be responsible for a zone whose borders will be defined and agreed upon by Washington, Moscow and Ankara.
As part of this arrangement, all forces from the Iranian military, the pro-Iranian Shiite militias and Hizballah will be required to leave Syria.
The US military is to have two security zones – one covering the entire area east of the Euphrates River up to the Iraqi border including Kurdish areas (see attached map). This arrangement will partly resurrect the accord reached in late 2015 by US President Barack Obama and Putin, for the division of Syria into areas of influence. All territory east of the Euphrates was allocated to the US, with Russia taking responsibility for all areas west of the river until the Mediterranean coast. .
Under the new deal, the Turkish area is to stretch about 650 kilometers along the entire Syria-Turkey border and extend between 35 and 50 kilometers into Syrian territory up to Al-Bab, the town where the Turkish military is engaged in its third straight month of fighting for its capture from ISIS.
DEBKAfile’s military and intelligence sources report that the overriding change on the ground will be the establishment of a second US security zone adjacent to Syria’s borders with Israel and Jordan. It means that the approximately 7,500 US special operations forces troops currently in Jordan will be shifted northward into southern Syria.
Russia had originally planned to deploy Syrian military, pro-Iranian Shiite militia and Hizballah forces in battles for the capture of land around the cities of Derra and Quneitra on the Syrian side of the Golan. That plan has been dropped and will be superseded by the deployment in southern Syria of US troops accompanied by Jordanian special forces and Syrian rebels, trained by American instructors in Jordanian military camps.
Israelis will breathe a sigh of relief over the removal of the threat of Iranian and Hizballah forces being deployed along their northern border with Syria.
The Trump-Putin deal for Syria and its ramifications are explored in the coming issue of DEBKA Weekly (for subscribers) out Friday, with especially attention to the way it leaves Iran and Hizballah high and dry.
http://debka.com/article/25900/Trump-Putin-safe-zones-deal-ousts-Iran-from-Syria