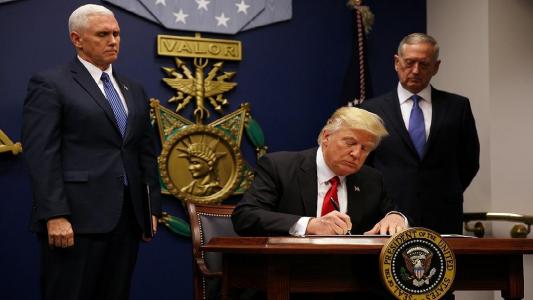 Donald John Trump, has signed a revised travel ban banning citizens of 6 Muslim-majority countries from entering the United States.
Three African countries are affected by the ban which is expected to take effect after 10 days. Somalia, Sudan and Libya have made the list again.
An earlier ban which affected 7 countries was suspended by a federal judge, the result of which is the current one.

The 10-day period is believed to be in place to avert some of the chaotic scenes that were seen at US airports after the first ban which was to take immediate effect. The current order has also ‘freed’ Iraq from the ban. Syria, Yemen and Iran complete the latest list.
The Organization of Islamic Cooperation (OIC) last month slammed the earlier order describing it as ‘selective and discriminatory.’ The OIC said it was of the view that the ban will further complicate the grave situation that refugees find themselves.
They also held the view that it would only play into the hands of violent terrorists to continue their acts.
‘‘Such selective and discriminatory acts will only serve to embolden the radical narratives of extremists and will provide further fuel to the advocates of violence and terrorism at a critical time when the OIC has been engaged with all partners, including the US, to combat extremism and terrorism in all their forms and manifestations,’‘ an OIC statement read.
OIC is the second largest inter-governmental organization after the United Nations. It has 56 other member states across the world. The Gambia is set to host the next summit of the body.
http://www.africanews.com/2017/03/06/trump-s-new-travel-order-sudan-somalia-and-libya-remain-banned/