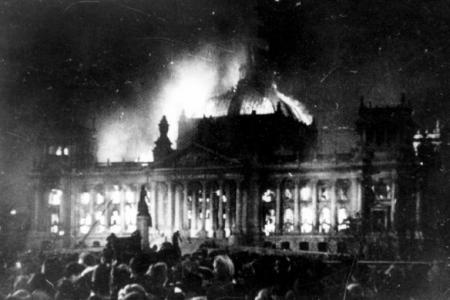 Given his serious unpopularity, an incident for illegal power grab is increasingly a dangerous possibility.

"Information Clearing House" - "Al Jazeera" - Donald Trump and his top Islamophobe nomenklatura gathered at the White House, now led by the militant crusader Stephen Bannon, are on a desperate lookout for their "Reichstag Fire" and their favourite propaganda outlet, Fox News, is franticly searching for it - even in Canada.

"Reichstag Fire" was an arson attack on the Reichstag, the German parliament, in Berlin on February 27, 1933. The incident was soon abused by Adolf Hitler and his gang to demand a suspension of civil liberties in systematic preparation for his putsch for total fascist power.

Ever since, the term "Reichstag Fire" is used metaphorically to mark a dreadful event abused by any proto-fascist movement to blame an amorphous internal enemy, to be coupled with an external enemy, and rapidly from there rapidly move towards a total control of the state apparatus by criminalising and crushing public dissent.

Given the fact of Trump's serious unpopularity with a significant portion of American society, this "Reichstag Fire" incident is increasingly a dangerous possibility.

From the historic Women's March in Washington to widespread airport rallies against his Muslim ban, Trump and his handlers know only too well his loss of the presidential popular vote by about three million nationwide is now growing into widespread public discontent, state-level gubernatorial opposition, and systematic resistance by the judiciary branch.

Soon after the executive order late in January banning Muslims from seven countries for 90 days to enter the United States, the Trump administration was given what it thought was its "Reichstag Fire" moment to justify its draconian measures and push for even more.

The incident presented itself when reports emerged that a gunman had attacked a Muslim centre in Quebec, Canada. Fox News, Trump's most trusted source of fake news, instantly came forward and reported the perpetrator was a Moroccan Muslim.

This, however, like most other things on Fox News, was a case of bogus reporting. The suspect of the mass murder in Quebec was, in fact, a violent "white nationalist" named Alexandre Bissonnette, who is a notorious character known to the local authorities for his racist Islamophobic views. Not only was the perpetrator of this crime no Muslim, but, in fact, Muslims were his direct targets.

None of this, however, prevented Fox News from jumping to the conclusion that the act of terror was perpetrated by a Moroccan Muslim and, on the basis of this false news, the White House Press Secretary Sean Spicer instantly jumped the gun, declaring it a vindication of Trump's Muslim ban.

Demonisation and official persecution of Muslims, just as Jews were in Nazi Germany, will progress apace until he manufactures his 'Reichstag Fire'.

But the proverbial cake in this desperate search for a "Reichstag Fire" goes to the notorious Kellyanne Conway, Trump's top chatterbox consigliere, who, in an interview soon after the Muslim ban, referred to two Iraqi refugees as "masterminds behind the Bowling Green massacre" with baldfaced charlatanism.

There is no such thing as a "Bowling Green massacre." She just made it up - and the dimwitted interviewer just stared at her and did not object to this fiction. Yes, two Iraqis were arrested in that city for allegedly having ties to an explosive device used against US troops in Iraq.

But there was no "Bowling Green massacre", except in the viciously demented mind of Conway, the flowering achievement of American charlatanism.

Trump and his handlers are desperate to find a Muslim "Reichstag Fire" and they will use the incident to further demonise Islam in the US and push for a Muslim registry or even worse.

The illegal and unconstitutional Muslim ban is only the first salvo. Trump has a longer spectrum in mind. Demonisation and official persecution of Muslims, just as Jews were in Nazi Germany, will progress apace until he manufactures his "Reichstag Fire".

In addition to a domestic threat, Trump and his gang will need a foreign war to safeguard his presidency for this and the next terms. He never stopped campaigning after his win. He knows for a fact he is a vastly unpopular president. His entire first term will be spent campaigning for the second.

The only "Holy War" Trump can wage is of course against Muslims.

Standing next to him is one Steve Bannon, an obsessed crusader you have to go back all the way to characters such as Raynald of Chatillon or Guy of Lusignan of the Crusaders period to find the likes of him: vicious, malignant, hatred of Muslims and Jews definitive to who and what he is.

Bannon has a malignantly illiterate conception of a perpetual war between Islam and Christianity that he has picked up off some lunatic website like his own Breitbart, fully on display in a vile speech he gave via Skype to a gang of like-minded militant Christians in 2014.

At one crucial point in this speech he says: "I believe you should take a very, very, very aggressive stance against radical Islam," and if you thought he means "radical Islam" and not "Islam", he immediately corrects you by adding: "If you look back at the long history of the Judeo-Christian West struggle against Islam, I believe that our forefathers kept their stance, and I think they did the right thing. I think they kept it out of the world, whether it was at Vienna, or Tours, or other places … It bequeathed to us the great institution that is the church of the West."

From Samuel Huntington to New Atheists to Benjamin Netanyahu to Bannon's Christian zealotry have been pointing to an all-out war with one final standing Muslim country not entirely subservient to the US Christian militarism: Iran.

Consistently raising public awareness and mobilising civil disobedience against Trump's policies have now become the hallmarks of a whole new generation of anti-war civil rights movement in the US.