Skip to main content Skip to search
Secondary menu
Home » Trump – for peace or for war with Russia?

Trump – for peace or for war with Russia? 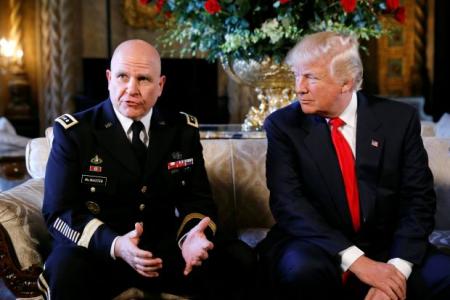 In Moscow, the appointment of Mc Master as National Security Advisor of President Trump was taken as an unmistakable signal. “McMaster is…a 100 percent threat to Russia from the US, and it’s not getting weaker or smaller. Defense and intelligence wing of Washington will carry out a Russophobic policy,” the first deputy chairman of Russia’s Federation Council Committee on Defense and Security Franz Klintsevich told Sputnik on Tuesday.

John McCain, the Republican chairman of the Senate Armed Services Committee and one of Trump’s most strident critics for going “soft” on Russia, was among those congratulating the White House on McMaster’s appointment. After having delivered extraordinary remarks at the Munich Security Conference over the weekend describing his own party’s administration as in “disarray,” McCain issued a statement Monday giving Trump “credit for this decision, as well as his national security cabinet choices. I could not imagine a better, more capable national security team than the one we have right now.”
Democratic Senator Sheldon Whitehouse of Rhode Island also praised the naming of McMaster, declaring: “Every time they add a grown-up into the equation we should all be happy. And I think McMaster is a certified, card-carrying grown-up and a very, very respected military officer [among] his peers.”
The media response was similar. The right-wing editorial board of the Wall Street Journal commented: “President Trump likes a government of billionaires and generals, and on Monday he chose another one as his National Security Advisor… This could be an inspired choice if Mr. Trump heeds his counsel and White House politicos don’t interfere.”
The editorial acknowledged that “with former Marine General Jim Mattis at Defense and retired Marine General John Kelly at Homeland Security, the Trump administration is top-heavy with distinguished Pentagon brass.”
It continued: “But someone—and we don’t mean Mr. Bannon—has to plot and steer a strategy for reclaiming US influence as China, Russia and Iran press to drive the US out of what they consider to be their spheres of influence in Asia, Europe and the Middle East. This means turning Mr. Trump’s ‘America First’ instincts into policies that don’t merely mimic President Obama’s strategic retreat.”
The Journal has ample grounds for trusting McMaster to pursue such a strategy. In addition to his anti-Russia credentials, the army general has voiced open opposition to the idea that the US can pursue its objectives by means of drone assassination strikes and special operations raids. He is a proponent of “going in big” and a critic of the withdrawal of US troops from Iraq and Afghanistan.
Meanwhile, Washington Post columnist David Ignatius, who has close ties to US intelligence, was ecstatic. “McMaster is the real deal,” he said in a television interview Tuesday. “He is a warrior intellectual; he is someone who has made his name through his career speaking to power.”
The appointment of McMaster exposes the utterly reactionary and undemocratic character of the official debate surrounding the Trump administration. The Democratic Party has chosen to oppose Trump on the basis of a neo-McCarthyite campaign depicting the president as Putin’s stooge and demanding a more aggressive military confrontation with Russia.
(from an analysis posted in WSWS.org)