The first promising signal for Erdoğan from Tillerson 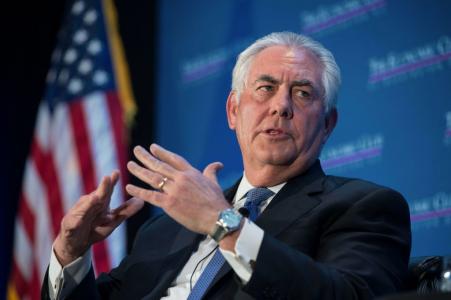 Murat Yektin
The first concrete words that Turkish President Tayyip Erdoğan wants to hear from the Donald Trump administration, scheduled to take office on Jan. 20, came from Trump’s pick for Secretary of State, Rex Tillerson, during his Jan. 11 testimony to the U.S. Senate’s Foreign Relations Committee.

While responding to questions on Syria, Tillerson said the U.S. “has to re-engage with President Erdogan in Turkey … In the absence of American leadership, he has gotten pretty nervous about his situation and turned to … Russia.”

This single sentence summarizes a great part of the current situation quite well.

Another statement by another U.S. authority at about the same time shows how little the outgoing Barack Obama administration understood the current situation, and why Turkey-U.S. relations have regressed to the state described by Tillerson.

That statement was a tweet by the U.S. Central Command saying that the Syrian Democratic Forces (SDF) had “confirm[ed] that it has no affiliation or ties with the PKK,” referring to the outlawed Kurdistan Workers’ Party and quoting a Jan. 10 statement by the SDF.

“Is this a joke or has CENTCOM lost its senses?” replied İbrahim Kalın, the spokesman for the Turkish Presidency. “Do you believe anyone will buy this? The U.S. must stop trying to legitimize a terrorist group.”
There are a few reasons why the statement was indeed a desperate move by the CENTCOM, aiming to prove that it is doing the right thing in Syria.

Firstly, the SDF is a front organization founded in October 2015, after Turkey opened up of its strategic İncirlik air base for U.S.-led coalition flights against the Islamic State of Iraq and the Levant (ISIL) after a series of contacts between Erdoğan and Obama and after the Russian air force had started to be deployed in Syria.

Secondly, the main component of the SDF, according to its manifesto, is the People’s Protection Units (PYG), the militia of the Syria-based Democratic Union Party (PYD), which is the Syrian branch of the PKK. The PKK is engaged in a four decade-long fight with Turkey, a NATO ally of the U.S., which also officially designates the PKK a terrorist organization. PYD leader Salih Muslim has on a number of occasions - most recently during a conference in Brussels on March 6, 2016 - said that he considers Abdullah Öcalan, the imprisoned founding leader of the PKK, as his own leader.

Thirdly, speaking during a Senate panel on April 28, 2016 about supplying military material to the YPG, U.S. Secretary of Defense Ashton Carter said “yes” when asked by Sen. Lindsey Graham whether the PYD and YPG were aligned with the PKK.

The U.S was absent at the beginning of the Syria civil war and then jumped onto the stage with the worst possible partner.

Going back to Tillerson’s Senate testimony, he also said that after the elimination of ISIL the West world be able to deal with other organizations like Al-Qaeda, the Muslim Brotherhood and Iran-affiliated groups, possibly implying Hezbollah or Hashd al-Shaabi.

Perhaps Erdoğan might have reservations about any fight against the Muslim Brotherhood and Hezbollah, (as a legal political force in Lebanon). But Turkey’s biggest problems now are the PKK and ISIL - the rest will be negotiable.
http://www.hurriyetdailynews.com/the-first-promising-signal-for-erdogan-from-tillerson.aspx?pageID=449&nID=108462&NewsCatID=409