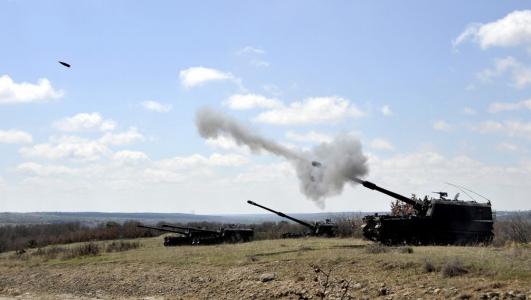 by PAUL IDDON
Fresh from its victory over Islamic State militants in Al Bab in northwest Syria, Turkey is reiterating its longstanding threat to attack the Kurdish-led Syrian Democratic Forces in Manbij to the east.

Turkey routinely dismisses U.S. assurances that the Syrian-Kurdish People’s Protection Units — or YPG, the most significant group in the SDF coalition — have vacated Manbij, which the coalition captured from the Islamic State in August 2016. Unless the United States forces the YPG out, according to the Turkish government, then Turkey will attack.
“We have said that we would strike if the YPG fails to withdraw,” Turkish foreign minister Mevlut Cavusoglu said on March 2. “Our demand from the U.S. and its new administration is to have the YPG leave Manbij as soon as possible.”

Turkish troops in Syria are currently aiding around 2,000 Free Syrian Army militia fighters. These opposition fighters yearned to fight the Syrian regime rather than the Islamic State and the YPG, and consequently, there were brief clashes with Syrian troops who advanced on Al Bab from the south.
Syria is complicated mess, and the only thing that prevented the fighting between the Turkish-backed FSA and Syrian army from escalating further was Russia intervening and ordering both sides to knock it off.
Russia, for its part, has also provided air support to Turkish forces, their FSA allies and the Syrian army around Al Bab. And after Turkey and the FSA threatened the SDF in Mabij, Russia brokered an agreement to directly hinder their efforts. Now, the SDF will hand over villages west of Manbij to the Syrian army.
In other words, Russia helped set up a Syrian-controlled buffer zone. And this means Ankara and its proxies — if they advance east to Manbij along the M4 highway — will have to first break through Syrian army lines, risking a direct clash with Damascus.

The move makes strategic sense from the SDF’s point of view. Effectively, the SDF has given up its western front, and in exchange, it doesn’t have to worry about a potential Turkish-FSA advance into its territory … in theory.
It also makes sense from the Syrian regime’s perspective. Damascus has vehemently opposed the Turkish military incursion into Syria which began in August 2016 — and the agreement could keep Turkish advances in check.
It’s been clear since Syrian troops began advancing on Al Bab from the south that the M4 highway would become the de facto demarcation line between the Turkish and Syrian armies. The highway links Al Bab and Manbij, and Manbij to the Islamic State’s Raqqa stronghold.
But the southern route to Raqqa is closing. The Syrian army is pressing toward I.S.-controlled Deir Hafir to the southeast. Together with the agreement blocking a Turkish advance on Manbij, the Turkish army has nowhere to go.
As noted here before, Turkey is unlikely to get the backing of either the United States or Russia were it to assault Manbij. The Kremlin and the White House have different priorities — fighting the Islamic State.
Russia is backing a Syrian offensive aimed at Palmyra while the United States is supporting the ongoing SDF offensive toward Raqqa. Russia also sought to include the political wing of the YPG in Geneva negotiations on Syria’s future, and neither Moscow nor Washington agrees with Ankara that the YPG should be excluded from any ceasefires.

Some of Turkey’s obstacles are self-inflicted. After it defeated the Islamic State in northwest Syria, there is much less leverage — or justification — for Ankara to seize any more territory. Turkey also needs Russia to prevent Syria from confronting its forces, as evidenced when Syria threatened to shoot down Turkish aircraft supporting the Al Bab operation in November 2016.
Ankara could only continue air strikes after a one-week hiatus by consulting with Russian military officials who convinced Damascus to stand down. Moscow is unlikely give Turkey as much leeway if it turns its guns on the SDF.
Even though there are U.S. commandos among the SDF in Manbij, Cavusoglu claimed there is no risk of a “faceoff” were Ankara to attack the city. However, were Turkey to bombard the city with warplanes and artillery instead of launching a ground assault, such a move would risk killing Syrian, and possibly even American, military personnel.
Syrian warplanes almost killed U.S. commandos working with the SDF in a bombing raid on Hasakah in August 2016.
In any case, Turkish deputy prime minister Numan Kurtulmus notably contradicted assertions by Turkish officials that Al Bab’s capture would be followed up by a Turkish assault on Manbij and Raqqa last month. “With [capture of] Al Bab, Euphrates Shield will be over as goals will have been achieved,” he said.
“Raqqa is something else. It doesn’t threaten Turkey’s borders.”
And even if Turkey were to pledge ground forces to the Raqqa operation it is essentially blocked from doing so.

As Al Monitor columnist Fehim Taştekin noted, Damascus’ takeover of Manbij’s western front leaves “Turkey with three alternatives to reach Raqqa: Manbij, Kobani and Tell Abyad. But the Kurds and their allies control all of these locations. If Turkey insists on hitting Raqqa first, it will have to fight the Kurds and their allies.”
Fortunately from Ankara’s perspective, the Turkish incursion has split Syria’s Kurdish territories in two — fulfilling a hugely significant Turkish objective for intervening in the first place.
But overrunning the regime’s forces and marching on Manbij? It could happen, but would risk escalating an extremely tense situation, alienate Moscow and Washington — and Assad’s main patron, Iran. Taking that big of a bite is likely too large for this regional power to swallow.