Skip to main content Skip to search
Secondary menu
Home » The Speech: Trump Tried to Win One for the Gipper

The Speech: Trump Tried to Win One for the Gipper 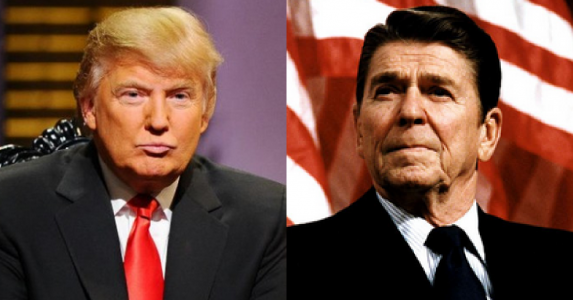 The president that Trump was channeling in his more personable tone, his optimism about America’s future was Ronald Reagan.
Jacob Heilbrunn
The conventional wisdom about Donald Trump is that he is unconventional. He delivered again tonight, playing against type. This was Trump’s anti-inaugural speech. Trump’s tone was totally different from the dark carnage that he talked about in January.

Now the emphasis was on a “nation of miracles” and unity. “It’s pure unadulterated division,” he said. “We have to unify.” “The time for trivial fights,” he declared, “is over.” This was the larger theme of his speech, which was measured, disciplined and controlled. This was Trump 2.0, the reboot that many conservatives at places like the Wall Street Journal editorial page have been demanding. Centrist Democrats like West Virginia Senator Joe Manchin also said that his “tone was good.”
Indeed, it was closer to an embrace of American exceptionalism than anything Trump has previously endorsed. The president that Trump was channeling in his more personable tone, his optimism about America’s future was Ronald Reagan. Reagan would have cringed at Trump’s dyspeptic remarks about free trade, but he would have hailed his call for “hope and renewal.” The truth is that this evening Trump tried to win one for the Gipper.

Right at the outset Trump set a different tone by noting that it is Black History month and condemning the vandalism of Jewish cemeteries and the murder of an Indian engineer in Kansas. He went on to state—again in contrast to his inaugural address—that America is on the move, that a sense of optimism pervades the country. He even declared that our allies will see that “America is ready to lead.”
To be sure, Trump did not stint on the themes that he enunciated during the campaign. He complained about the trillions that Washington has expended upon foreign wars and talked about national renewal by which he meant a one trillion dollar infrastructure plan. He promised to “demolish and destroy ISIS.” Earlier in the day, he had indicated to journalists that he was open to the idea of a path to citizenship for illegal immigrants. In his speech tonight, he was far more cautious: he made it clear that he wants a merit-based system and wants Washington to worry about protecting wages and jobs first by cracking down on illegal immigration and controlling legal immigration more tightly. But he also said that “I believe that real and positive immigration reform is possible.” He also condemned the “lawless chaos” on the southern border and reiterated his call for a wall. He also referred to “radical Islamic terrorism”—a term that at least has the virtue of being true.
But there were big shifts in Trump’s rhetoric. Consider foreign policy. The word Russia was never mentioned. Nor was there any call for a big anti-Islamic alliance. There was nothing about the merits of Brexit or the deficiencies of the European Union. While he called for America’s allies to contribute more, it had a perfunctory feel to it. It was also noticeable that Trump did not state that Mexico would pay for the wall.
Trump laid out some general principles on ObamaCare, stating that anyone with a preexisting condition should be protected. Trump was aiming for a Reaganeseque note. He asked Americans to be “guided by a vision, not blinded by our debts.” He exhorted them to embrace, “This renewal of the American spirit.” He even stated that Americans can solve “every problem.”—a lofty claim that Reagan would have made, impossible to fulfill but a radical vision of America’s promise. In his radicalism about the promise of American life, Trump was actually harkening back to Tom Paine, the idea that America, if not the world, can be reborn again.
How effective will Trump be? On Tuesday the Wall Street Journal editorial page observed that Republicans have a golden opportunity to pass much of their agenda, but that Trump needs “less Bannon disruption and more focus on passing his reform and growth agenda.” His speech to Congress was a first step in that direction.
Jacob Heilbrunn is editor of the National Interest.