The Pentagon Can’t Rely on This Turkish Air Base 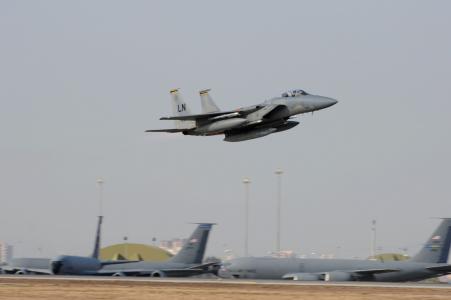 by PAUL IDDON
In January 2017, Turkey announced a potential “crisis in confidence” in its relationship with the United States. The two countries have differing objectives in the wider region and disagree signifiantly regarding support for Syrian Kurds fighting Islamic State.

Consequently, Turkey once again considered denying Washington use of its strategically-important Incirlik Air Base in its southeastern Adana province. The Pentagon has found time and time again that it can’t rely on the site for military operations in the Middle East.

During the Cold War, the 62-year-old air base served an important role as Turkey formed much of NATO’s southern flank against the Soviet Union. Incirlik — where America still stored nuclear bombs as of 2017 — could have facilitated bomber attacks had a long-feared third world war broken out between the two superpowers.
After the Soviet Union collapsed, the top priorities in Washington and Ankara quickly began to shift. Following the 1991 Persian Gulf War, the U.S. launched Operation Provide Comfort to shield Iraq’s Kurds from Saddam Hussein’s genocidal onslaughts.

Washington established a no-fly zone and policed it with aircraft based at Incirlik. However, the Americans could only do so if the Turks renewed their lease of the base every six months.
Turkish politicians often hotly debated the issue in parliament. The country’s hardliners argued that Provide Comfort fostered autonomy in Iraqi Kurdistan and thus increased the threat to Turkey from the Kurdistan Workers’ Party, also known by the acronym PKK.
In summer 1996, Saddam Hussein sent ground forces into Iraq’s northern Kurdish areas right under the nose of Washington’s aerial screen. Neither Turkey — nor any of the United States’ other regional allies — permitted Washington to launch airstrikes in response to the offensive.
Denied access to the critical bases, the Clinton administration could only readily fire 14 Tomahawk cruise missiles from U.S. naval vessels and launch long-range strikes with B-52 bombers — which fired 14 additional air-launched cruise missiles — against Iraqi air defense systems in the country’s south, approximately 500 miles away from Kurdistan.
The B-52s flew all the way from California and Guam — the longest bombing mission in history — with carrier-borne U.S. Navy F-14 Tomcats escorting the lumbering planes to their targets.
The U.S. continued to maintain the northern no-fly zone, nicknamed Operation Northern Watch, from Incirlik right up until the eve of the 2003 Iraq invasion. Then Turkey again refused to cooperate with the Americans.

The Pentagon wanted to open a northern front against Baghdad — in cooperation with Kurdish Peshmerga forces — from Turkish territory. Turkey denied Incirlik to the Americans.
With Washington unable to use the strategic launchpad, American forces had to focus their invasion entirely from the south. “We got all dressed up for the ball, then weren’t invited,” a U.S. Air Force spokesman in Incirlik remarked at the time.
Ankara’s refusal to grant Washington permission to use Incirlik undermined its own longstanding influence over the U.S. in the region. The Pentagon withdrew the aircraft it had based there since 1991.
Washington no longer had no-fly zones to enforce and American troops had access to other airstrips in Iraq — including at least three main operating bases right alongside Baghdad International Airport — and the Persian Gulf region.
“This removed a major source of Turkish leverage over Washington,” one retrospective assessment from International Business Publications noted. This made “it easier than it had been in decades for American decision-makers to ignore Ankara’s views.”
Ankara’s actions “may have been a factor in subsequent American unresponsiveness to Turkish appeals for greater involvement in rebuilding Iraq, on the one hand, and for action against the PKK, on the other,” the assessment speculated.

All this did not mean the United States would never need Incirlik again. In September 2014, the U.S. extended its then one-month-old operation against Islamic State in Iraq into northeastern Syria. Given its extremely close proximity to the potential targets, Incirlik proved once again to be the perfect place for the Pentagon to launch airstrikes.
Here, yet again, Ankara refused to open up Incirlik to the American operations. Turkish authorities claimed they would only participate in the coalition’s effort against Islamic State if Washington also targeted the Syrian regime of Pres. Bashar Al Assad.
Once more, the Pentagon turned to aircraft carriers and bases in the Gulf. This enormously extended the flying time American pilots needed to reach and bomb Islamic State targets in Syria.
Turkey became infuriated when the United Sates began to cooperate with the Syrian Kurdish People’s Protection Units forces — aka the YPG — arguing that the militia was an offshoot of the PKK and should be treated as such. Instead, American airpower flying from the Gulf helped the YPG break Islamic State’s siege on the Syrian Kurdish border city of Kobani, while Turkish tanks sat idly watching the battle from the other side of the border.
The United States continued, and continues, to support the YPG against the brutal terrorist group. The Kurdish forces are by far its only reliable partner on the ground in Syria against the militants.

Turkey reversed its decision on Incirlik in July 2015. The move followed the bloody collapse of a 2013 ceasefire with the PKK and a return to open warfare with the Kurdish rebels.
American-led coalition aircraft were permitted to use the base to target Islamic State in Syria. Turkey joined the coalition, but focused the bulk of its efforts on targeting the PKK in southeast Turkey and the mountains of Iraqi Kurdistan instead.
By the end of 2016, tensions remained between Turkey and the foreign powers using Incirlik. After German officials were denied the right to visit their military personnel at the base, Berlin reportedly considered relocating its six reconnaissance Tornado jets to Cyprus, Jordan or Kuwait.
Furthermore, there had been speculation that German Tornado crews might end up turning over intelligence images of YPG-controlled areas in Syria to Turkish forces. This reportedly prompted officials in Berlin to prepare plans to prevent sharing of this information with their counterparts in Ankara.
In July 2016, in light of these strained foreign relations, reports in the Turkish press implied that Turkish Foreign Minister Mevlut Cavusoglu had signaled Ankara’s approval for Russian use of the NATO base. Cavusoglu categorically denied he had made “any comment referring to Russian planes coming to the Incirlik Air Base.”
On top of the issues with NATO members on the base, some of the Turkish F-16 jet fighter-bombers that took part in the failed coup attempt on July 15, 2016 took off from Incirlik. Post-coup fears revolved around the safety of American personnel and the Pentagon’s nuclear warheads at Incirlik.
Ankara continues to strongly oppose, and condemn, U.S. support to the YPG, which is one of the reasons for contemplating once again whether to restrict the use of Incirlik. If Turkey follows through with its latest threat, the decision will only highlight the past precedents.
The move would clearly demonstrate that Incirlik is a notoriously unreliable base for the American military in a volatile region — and maybe push Washington and Ankara further apart.