The Mega U.S.-China Summit at Mar-a-Lago: Let Trump Be Trump 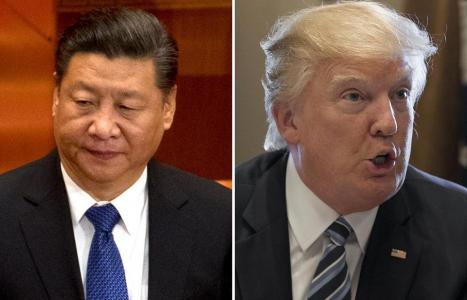 Gordon G. Chang
President Donald Trump plays host to someone as powerful and as willful as himself early next month at his Mar-a-Lago resort when Chinese ruler Xi Jinping arrives for a two-day visit. The showdown, disguised as an informal get-together, will be the first meeting of the two figures.

During the campaign, Trump incessantly focused on Xi’s China, vilifying the nation in the strongest terms. “We can’t continue to allow China to rape our country, and that’s what they’re doing,” Trump said in early May.
Yet for all the villainy he finds in China, Trump evidently sees no individual villains there. Xi Jinping will fly into the Florida resort largely untouched by Trump’s unkind words. This allows, perhaps, the two leaders to start fresh.
A fresh start may not in fact help much as the problems between the two men are not personal. The pair, many see, are similar, each believing their mission is to restore their states to historic grandeur. “Xi’s ‘great rejuvenation of the Chinese nation’ is Trump’s ‘Make America Great Again,’ ” Robert Blohm, a Toronto-based China watcher, told The National Interest. “It’s the same politics of humiliation and resentment.”
Each leader, pursuing especially nationalistic policies, views the other as his country’s most important adversary, so that should make the Mar-a-Lago meeting a confrontation, even if the tone somehow remains civil.
Trump’s top diplomat, Secretary of State Rex Tillerson, did all he could to ensure a civil tone for the Florida event by making a deep rhetorical bow to China during his visit to Beijing last weekend. While there, the “rookie diplomat” said Washington, in its relations with China, was guided by “non-conflict, non-confrontation, mutual respect, and win-win cooperation.”
That was going way too far. Those words have been Beijing’s code for the U.S. not challenging China, and Tillerson, incredibly, said them on Saturday during his presser with Chinese counterpart, Foreign Minister Wang Yi.
No wonder Xi, on Sunday, was effusive in his praise of his adversary’s secretary of state. “You said that China-U.S. relations can only be friendly,” the Chinese leader said to Tillerson. “I express my appreciation for this.”
There is an almost universally accepted view in American policy circles that the United States needs to maintain friendly relations with Beijing in order to obtain its help on various issues. In recent weeks, analysts and political figures from across the spectrum have said Washington absolutely needs Chinese assistance to rein in North Korea. Rex Tillerson’s adoption of the Chinese formulation of Sino-U.S. ties can perhaps be explained as an attempt to win over Beijing.
This approach has been Washington gospel for decades, but it has not worked. As the new secretary of state said in Tokyo at the start of his three-nation trip this month, “The diplomatic and other efforts of the past 20 years to bring North Korea to a point of denuclearization have failed.”
Despite continuing failure, American officials keep trying. Said a Trump official to Reuters this month, “You can only fight on so many fronts at once and given that the North Korean threat is accelerating, there is an opportunity for us to prioritize Chinese assistance there, and perhaps not prioritize areas of disagreement we might otherwise be very vocal about.”
One thing Washington has traditionally been vocal about is human rights. In the face of Chinese ferocity on the subject, however, American officials often wilt. Secretary of State Hillary Clinton famously wilted in February 2009 when she said, en route on her first trip to China in that role, the Obama administration would not let human rights interfere with other issues it had with Beijing.
Chinese leaders, according to Beijing-based Laurence Brahm, were “ecstatic” when they heard that, believing she “had finally succumbed to a full kowtow.” One month later Beijing started a series of belligerent—and dangerous—harassment of unarmed U.S. Navy reconnaissance vessels in the international waters of the South China Sea and Yellow Sea. In short, Washington, through well-intentioned but misguided policies, encouraged the very behavior it sought to prevent.

Now, the Trump administration is going to have to relearn that fundamental lesson. As Sophie Richardson of Human Rights Watch announced in a tweet Tuesday, the administration refused to sign a letter inked by 11 capitals protesting the torture of Chinese human rights lawyers. The Washington Post later reported the decision not to sign was made by the State Department bureaucracy. Whether the decision was endorsed by Tillerson or not, the absence of an American voice on the subject will only confirm in Xi Jinping’s mind that the new administration is afraid to anger him.
American leaders, after decades of working with their Chinese counterparts, still do not understand the only thing Beijing understands is strength. A result of this lack of comprehension is that, despite the overwhelming disparity of leverage in America’s favor, Chinese behavior has been deteriorating across the board.
Candidate Trump was willing to challenge Beijing in public. He famously proposed a 45 percent tariff, promised to brand China a currency manipulator, likened the Chinese to the “Mafia” on cybertheft.
And his assault on America’s China policy did not end on Election Day. President-Elect Trump took a congratulatory phone call from Taiwan President Tsai Ing-wen on December 2, breaking about four decades of One-China protocol. He then gave Fox News Channel and Wall Street Journal interviews in which he questioned the advisability of the One-China policy. The resulting uproar in the foreign policy community and the disquiet among his advisors forced Trump last month in a telephone call with Xi to say he accepted the policy. That was, in Chinese eyes, a victory in the initial test of wills.
Whatever one thinks of One-China, the U.S. faces a potentially existential challenge from North Korea, a threat Beijing has enlarged by supplying the Kim regime with military technology and equipment and diplomatic and economic support.
How does Trump convince China to help on Korea? Xi Jinping arrives in Mar-a-Lago soon, and maybe this is where the new administration should begin to show less respect than Chinese leaders are accustomed to.
The menu at the Florida resort could be a real sign of a new chapter in ties with Beijing. “I would not be throwing him a dinner,” Trump said in August 2015 on “The O’Reilly Factor,” referring to Xi. “I’d get him a McDonald’s hamburger, and I’d say we gotta get down to work.”
There’s a lot of work to get down on. Trump, according to one of his officials, has identified North Korea as the “greatest immediate threat” to the U.S.
At Mar-a-Lago next month, North Korea is at the top on the agenda. And let’s hope Big Macs are on the menu.
Let Trump be Trump.
Gordon G. Chang is the author of The Coming Collapse of China. Follow him on Twitter @GordonGChang.