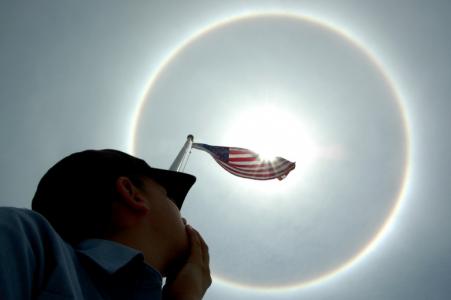 Fire in the Mind

When a new idea lights up the world, there is always a dispute over what it means. At the outbreak of the French Revolution, Thomas Jefferson, then the U.S. minister to France, described it as the “brave & valiant citizens who have sealed with their blood the liberty of the nation.” The Irish statesman Edmund Burke called the upheaval a “strange chaos of levity and ferocity, and of all sorts of crimes jumbled together with all sorts of follies.”
Similarly, in the 1930s, some Americans embraced communism as the brave new way forward. Others denounced Stalinism as the crime of the century.
Movements get really messy when they rise from the bottom up. Populist movements are particularly prone to generating admixtures of ideologies. No idea generated more confusion than the America First movement, an assemblage of Americans drawn to the anti-interventionist cause. After one gathering, one of the movement’s leaders, Charles Lindbergh, wrote in his diary, “some were solid citizens; some erratic; some intelligent; some stupid; all types are present at these meetings.” For the most part, all were welcomed to the fold—from pacifists to those arguing for “moral rearmament” or for real arms build-up—as long as they were against American entry into the war.
America’s other major modern antiwar movements weren’t that much different from America First. The anti-Vietnam protests crossed over political party lines. Everyone from potheads to popular intellectuals populated the picket lines. And while Code Pink might have been the face of anger over Iraq, there was no coherent political movement behind it, which was why the crusade largely evaporated as a national presence after President George W. Bush’s exit and the 2008 elections. The glue that held these movements together was opposition to a war.
Antiwar movements are not unique. Other recent waves of populist sentiment were more rainbow coalitions than a solid phalanx of purposeful agendas. The Tea Party movement exploded in the run-up to the 2010 midterm elections. But as chapters popped up all over the country, attempts to corral them under a national umbrella failed. Likewise, efforts to pigeonhole the movement in terms of views on national security or other issues fell flat.
Occupy Wall Street, the progressive backlash to the Tea Party movement, erupted across the United States. Though definitely “anti-establishment,” the movement’s purpose was never clear. A typical rally included pleas for environmentalist causes, rants against corporate greed, speeches on homelessness, antiwar diatribes and demands for a “living wage.” The movement soon splintered among the constituent causes that rallied to deliver its initial momentum.
New Face of Populism
Today, the people’s movements are back. A new tide of populist fever is represented by Brexit—the shocking and unexpected vote in Britain to leave the European Union—and the surprising election of Donald Trump. Both events, as well as rising political unrest from France and Germany to Italy and Central Europe, are the freshest face of populism.
In the United States, we call it Trumpism. In Europe, it is generally described as the rise of nationalism. Some love it. Some hate it. There is no question that, with three big national elections coming up, nationalism has some Europeans feeling nervous.
For some, nationalism grates likes nails on a chalk board. In 2013, former European Commission president Jose Manuel Barroso equated nationalism with “xenophobia and racism and intolerance.” It was, he insisted, the cause of Europe’s horrific experience in the interwar years and World War II. “What we don't like is the discourse,” he warned.
That comment gets to the root of challenge—which face of the new populism is your problem? Barroso sees nationalism as having an ugly face. Trumpism has encountered similar disdain in the United States. Hundreds of thousands marched on Washington the day after Trump’s swearing-in and accused the administration of every sort of evil.
On the other hand, many Americans and some Europeans view a revival of nationalism as a reaffirmation of popular sovereignty and the protection of individual liberty, arguably the bedrock of the liberal enterprise. They think that it is a good thing.
Like many bottom-up movements, new populism is a mess. It does include “destructive nationalism” that believes Hitlerian marches were the good old days. The other face is “constructive nationalism,” embraced by folks who think John Locke, Adam Smith, Thomas Paine and Friedrich von Hayek were on the right track.
War Against Ideas
It might difficult to discern between the two faces of nationalism because part of the battle of ideas is to discredit them by lumping them together—either carelessly or by intent.

Those who wished to discredit the America First movement demonized it, accusing it of every ill. It was bedeviled, for instance, with charges of racism, even though some black American public intellectuals and civil rights activists shared Lindbergh’s anti-interventionist position. For example, J. Finley Wilson, a national figure in the black community who headed the Elks Fraternal Organization, served on the leadership committee of America First.
But by and large, black antiwar leaders wanted nothing to do with Lindbergh. They were appalled by a 1939 Reader’s Digest article in which he argued that the key to defending America was protecting against “dilution by foreign races.” Roy Wilkins responded in Crisis, the official journal of the NAACP, that the “prize” for Lindbergh’s “white race” was “the right to control and exploit the lands and destiny of hundreds of millions of black, brown, and yellow people.”

Black anti-interventionists were further alienated from the America First movement by Lindbergh’s infamous September 1941 speech attacking “the Jews” for pressing the United States to enter the war. The remark was interpreted as not just anti-Semitic, but broadly racist. J. Finley Wilson, for one, promptly resigned from America First in protest.
Lindbergh’s political opponents were not disappointed by attacks that labeled the America First movement as closet fascists as well as bigots. Lindbergh was personally accused of befriending Nazi leaders. As A. Scott Berg concludes in his judicious biography of Lindbergh, however, the leader of the America First was neither a fascist nor a racist. Lindbergh’s problem was that he was not politically artful enough to shield himself from these criticisms or discipline his unwieldy movement.
America First thrived not because it was the face of evil. America First sustained a political influence because, up to the bombing of Pearl Harbor, many Americans were sympathetic to the argument that the United States should stay out of the war. Pearl Harbor changed their minds, and the movement collapsed.
The lesson of America First is that demonizing populist movements happens as a matter of course.
Trump’s Challenge
Donald Trump will find himself fighting a two-front war of ideas. At home, his political opponents will demonize Trumpism at every turn. Odds are that it won’t matter much—as long as he delivers on his promise to the American people to make America better.
But Trump also has a fight on his hands in Europe, where the forces of constructive and destructive nationalism are warring against other. Additionally, he may have to square off with proponents of the European project who still think that the continent can be run out of Brussels. Further fueling the battle of ideas are Russian disinformation and active measures which, on the one hand, fuel the cause of destructive nationalism with covert funding and support and, on the other, offer up Putin as the defender of Christian values in the West.
Trump needs to care about the war of words. The peace, prosperity and stability of Europe are of vital importance to the United States. Between Russian meddling, nationalist squabbling and the Euro-federalists, multiple forces are pulling Europe apart.
Trump needs to go over there. He needs to engage Europe in word and deed—not just with support for NATO and hard bargaining with Putin, but he must also make the case for constructive nationalism. His support for a U.S.-UK free trade agreement is good start, but it is just a start.
For their part, the Euro-federalists need to stop demonizing the constructive nationalists. Sure, they have different visions for the future of Europe. They can debate those in a positive, constructive manner. But Euro-federalists need to save their vitriol for the destructive purveyors of hate.
Euro-federalists also would be wise to stop trashing Trump. They need all the allies they can get. Instead, they should be optimistic, constructive and engage the new U.S. administration. It will be far better for them to try to build better outcomes with the United States than to commit to an inflexible vision of European integration or nothing.
A Euro-federalist/constructive nationalist alliance might be an uneasy alliance, but it beats dragging Europe under.
It is time to recognize that constructive nationalism is a force, and no matter how messy it is, it’s here to stay. Leaders on both sides of the Atlantic should make the best of it.
A Heritage Foundation vice president, James Jay Carafano directs the think tank’s research on foreign relations and national security issues.