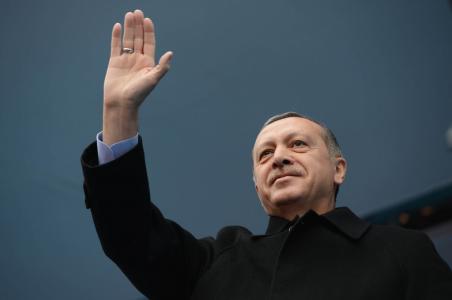 The incident also happens to take place one year after the European Union struck a landmark refugee deal with Ankara. With hindsight, the pact may come to be regarded as the endpoint of Turkey’s European history: the moment when Ankara’s political relations with Europe reached their final evolution.

Throughout this past year, the deal has suffered condemnation and setbacks. Its stated goal was to stop the flow of hundreds of thousands of desperate migrants and asylum seekers that until early 2016 had crossed the Aegean Sea to reach Europe along the so-called Balkan route. As Donald Tusk, the president of the European Council, unambiguously put it six months after the accord’s inception: “We need to confirm - politically and in practice - that the Western Balkan route of irregular migration is closed for good.” Human rights organizations have questioned the pact on the ground that it provides for the return of refugees to a country, Turkey, where they may not be safe, and thus be in breach of the Geneva Conventions. The deterioration of the rule of law in Turkey under Erdogan, especially in light of the ruthless crackdown that followed the attempted coup in July 2016, has similarly raised questions about the Faustian character of Europe’s choices.

That perception is heightened by the ancillary parts of the deal. Europe agreed to disburse to Turkey € 6 billion for the returning refugees and it promised to advance negotiations for visa-free travel of Turkish citizens to Europe. The EU had always been weary of conceding on this demand, in fear that visa-free travel would lead the European labor market to be flooded by young Turks looking for a job. The chilling irony of pairing that concession as part of a deal which concomitantly blocs the arrival of thousands of desperate individuals looking for safety can be hardly missed. A flurry of European proposals have since been tabled, taking the EU-Turkey pact as a blueprint for future deals with sub-Saharan countries and Libya.

The power balance in the bilateral relation has dramatically shifted as a result of this accord. With the prospect of a full Turkish EU membership receding, visa-free travel to Europe is the highest prize in Ankara’s eyes, and Europe’s most valuable bargaining chip. Keenly aware of the high stakes, the Turkish leadership has displayed a heavy dose of brinkmanship. Week in and week out, Erdogan threatens to renege the deal if Europe doesn’t deliver on its visa promises. The strategy is reminiscent of the stunts that the late Muammar Gaddafi of Libya performed a decade ago, when he was party of a similar migrant deal to the one Turkey has obtained now.

An understated corollary is that the refugee deal is essentially a German deal: elaborated by a German think tanker, personally negotiated by Chancellor Angela Merkel first in October 2015, on a controversial visit to Ankara, and then finalized in March 2016 in Brussels, when Merkel cajoled her fellow European leaders into accepting what is today’s deal. As on many other issues, Europe is “bandwagoning” on German policy. Despite Berlin’s unwavering commitment to the European cause, other Europeans have long suspected that German policy is first about German priorities, choices and interests. The deal with Turkey arose because Germany took the extraordinary decision in the Summer of 2015 to suspend EU rules, which led to the arrival of over a million asylum seekers. As with the refugee deal, that U-turn was not coordinated with other European partners. Germans themselves have engaged in a typically furious domestic debate about the refugee deal and its humanitarian and ethical implications. But abroad, the reticence that is historically associated with Germany in relation to projecting power has all but evaporated. Berlin’s response to criticism about this deal is a Hobbesian one: it may be nasty, brutish and short-termed, but it will hold.

This pragmatism has a long pedigree in relation to German views of Turkey. Merkel had been opposed to Turkey EU membership from before she took power and EU membership negotiations with Turkey started, in 2005. At the time, this opposition materialized in the proposal of a “Privileged Partnership” with Turkey, as a substitute to full membership: a far-reaching cooperation framework building on the Customs Union of which Turkey and Europe have been part since 1995. Privileged Parternship would be to both parties’ advantage and would overcome the logjam surrounding the existential, political and institutional debate about whether Turkey does indeed belong to Europe.

A decade from now, we may come to view the refugee deal as the practical realization of Privileged Partnership. Turkey and the EU shares a common interest in upholding the deal, and there is a substantial financial incentive to make it work. In fact, it is worth comparing the much maligned sum that Europe agreed to pay with the potential costs of Turkish membership in the EU. A group of economists led by Kemal Dervis and Daniel Gros calculated that a Turkish membership might cost the EU an estimated 0,20% of its collective GDP. In today’s figures, that would be about € 28 billion. Maybe Europeans have found a relatively inexpensive way out of the membership dilemma.

What then about Turkey’s European aspirations? Some European countries like Austria have long advocated suspending membership negotiations, quickly rebuked by most other Europeans arguing that such suspension would cut every channel of meaningful dialogue between the EU and Turkey at a time when they most need to talk. But focusing on the membership question in such existential ways is disingenuous; simply put, the enlargement process is not where the beef of Europe-Turkey relation has been for a very long time. Instead, the key task for Europe is to decouple membership talks, which can continue symbolically, from the refugee deal, which is where any meaningful development is likely to occur. For the EU, that means being very strict on the conditions attached to the deal, and be ready to backtrack if conditions are not met. This is the very same mechanism that worked in relation to Europe’s successful enlargement policy, a process that run out of steam, because the ultimate prize was no longer in reach. But the incentives in the refugee deal are very clear and that is where the conditionality machine can work again. In recent months, for example, strict conditionality has prevented advancement in the visa negotiations due to Ankara’s refusal to soften its anti-terror legislation.

Apart from Turkey, this deal may well turn out to be also the endpoint of European history, at least as far as its foreign policy aspirations are concerned. The enlargement process used to represent the zenith of the EU’s ability and ambition to guide domestic changes abroad, while today it is epitome of its paralysis. The refugee deal has instead displayed a newfound pragmatism and realism in Europe’s external dealings. No more a normative, transformative player in the making, but a more cynical and transactional actor: especially after the turbulent 2016, that may be a good enough aspiration for Europe.