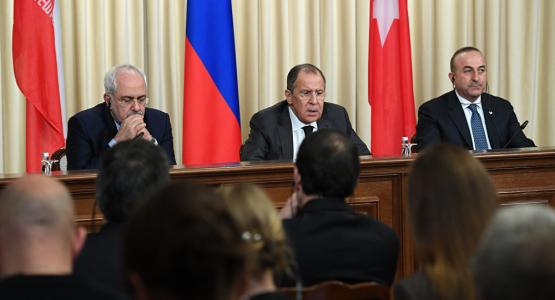 By OFRA BENGIO
Russia has fulfilled a long-held dream of reaching the warm water of the Mediterranean and is casting itself as the hegemon in the region.
Sixty years have lapsed since the Baghdad Pact which grouped together Turkey, Iran, Iraq and the West in an alliance against the Soviet Union and the concomitant Communist danger.

Nowadays this Middle Eastern architecture has shifted 180 degrees to where Russia, Turkey and Iran are in an ad hoc alliance against Islamic State but which may turn against the West as well. Still, the new alliance might be termed as a marriage of inconvenience where each of the parties has different motives and is acting at cross purposes in partitioning the Syrian bear.

Russia has fulfilled a long-held dream of reaching the warm water of the Mediterranean and is casting itself as the hegemon in the region. The erstwhile unipolar world where the US was the only power in the Middle East has disappeared and the resulting vacuum enabled Russia to spread its influence in many countries in the region and become the arbiter in the simmering conflict in Syria.

This structural shift has convinced Turkey’s President Recep Tayyip Erdogan to follow the adage “if you cannot beat your enemy, join him.” Ironically, it was the domestic threat perceptions that threw Turkey into the arms of Russia. So threatening the Kurdish national movement in Turkey and Syria appeared to him that Erdogan was willing to make his peace with Russia disregarding built-in Turkish fears of being flanked by Russia from the north and the south. Driven by the need to contain or destroy the Kurdish autonomous region in Syria, Turkey had in this way to compromise on three geostrategic issues: Russia’s hegemonic power on its southern border, the survival of its nemesis the Syrian regime, and the further solidification of its rival Shi’ite Iran in Syria.

The nuclear deal with Iran which came into force a year earlier had an unexpected but ironic outcome. Rather than moving Iran to moderate its policies, democratize and ally itself with the West, the deal pushed it to increase its hegemonic aspirations in the region, destabilize it and throw its lot in with Russia. But here too the aspirations of the minor hegemon might clash with those of the bigger one as Iran, too, seeks to reach the Mediterranean by building the Shi’ite axis from Iran via Shi’ite Iraq, Alawite Syria and Shi’ite Hezbollah.

In this endeavor its interests might clash in the longer run not only with Russia but Turkey as well.

Russia assumed the mantle of brokering peace in Syria. It has achieved a certain lull in the fighting, it is convening the peace process in Astana, and it is maneuvering the Assad regime for its own purposes, interestingly without having him included in the new found alliance. As for the US it is playing a minor role in the peace process but anyway the fate of Syria will be decided in the battle for liberating Al-Bab and Raqqa from ISIS. There, the US will have to take part while facing a dilemma which of its allies it will support: Turkey or the Kurds.

The Baghdad Pact lasted for only three years (1955-1958). The new tripartite alliance might not survive that long. This new structure is very fragile because of changes which are likely to occur in US under the new Trump administration, the deepening of the Sunni-Shi’ite divide and the multiplying players and conflicts in Syria, all of which promise to preclude stability and lasting alliances.

The author is a senior research associate at the Moshe Dayan Center Tel Aviv University and lecturer at the Shalem Academic Center.
http://www.jpost.com/printarticle.aspx?id=479495