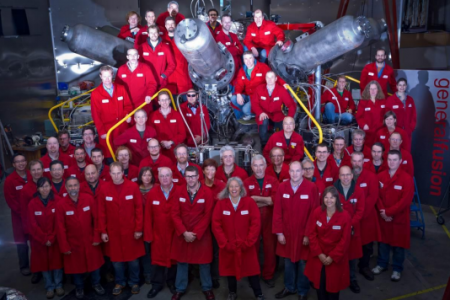 Nuclear fusion is premised on building technology that would replicate the reaction that naturally powers our Sun — two light atoms, in this case, hydrogen, are fused together under extreme temperatures to produce another element, helium.
The process would release vast amounts of clean energy drawn from an almost limitless fuel source, with nearly zero carbon emissions. However, it has yet to be done on a scale that would make it usable. Canadian scientists are hoping to change that, announcing plans to harness and develop nuclear fusion technology so they can deliver a working nuclear fusion plant prototype by 2030.

What they need, however, is for the government to invest in their vision. According to Fusion 2030, a report prepared by the University of Alberta, the University of Saskatchewan, and several companies, the group will need around $125 million to bring nuclear fusion to reality — a relatively minor investment considering the goal is to establish an operational, scalable plant that could soon replace oil and gas.

“There’s an opportunity here … we need to see an investment in research capacity and academia in order to make sure we’re producing the graduates with the skills that can contribute in this field,” Michael Delage, Chief Technology Officer of General Fusion, the second largest private fusion lab in North America, tells CBC News.

Image Credit: General Fusion
The funding isn’t meant to go directly towards General Fusion. Instead, they plan to distribute the investment among several research groups, universities, and organizations that share the same goal. Once the prototype plant is ready, the report asserts that private companies will play a big role in commercializing the technology.

“The technology we are using is an approach that we think has inherent cost advantages to do it,” Delage adds. “Once you build one of these and it begins to become commercially viable, we think we can be competitive with the grid.”

THE FUTURE OF NUCLEAR FUSION

It almost seems too good to be true — an energy source that can be drawn from one of the most abundant elements on Earth, at a very low cost, that doesn’t hurt the environment — but in an era when our dependence on fossil fuels is starting to take its toll on the planet, it’s about time we start to put serious thought and investment toward more sustainable alternatives.

The report highlights the potential of nuclear fusion as perhaps the most valuable renewable energy option by virtue of its having the highest energy density of any source, the best energy payback ratio (EPR), and the lowest carbon footprint among all sustainable sources available today.

“The clean energy source is available just about anywhere in the world — you can extract it from water. It’s something that we can build anywhere,” says Delage. “There is so much going on in this field across the world. We really believe by 2030 we’re going to see demonstration plants being built. We’d love to see that in Canada, and we could get there if we start to invest now.”

All things considered, nuclear fusion could indeed be what the world needs to make the definitive switch from fossil fuels to renewable energy. But it will need both the support of private companies and government organizations to make the technology available at a commercial scale.
References: CBC News, Fedoruk Centre