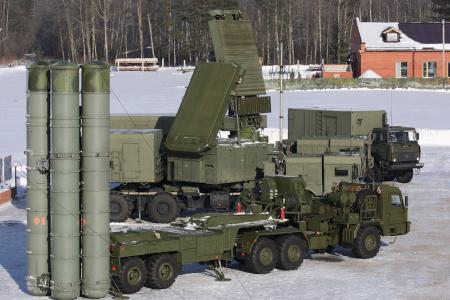 EXECUTIVE SUMMARY: Turkey, a NATO ally, may be on the brink of purchasing an air defense system from Russia. If the Turks place that weaponry on their soil, they will no longer have access to the NATO satellite signals critical for that very defense system to be useful.

And if that is not reason enough to hesitate, Turkish officials might recall that a year and a half ago, Ankara suffered a serious diplomatic crisis with its prospective air defense system supplier. Considering the fragile situation in neighboring Syria, another Turkish-Russian rift is not unlikely. Would a Russian air defense asset protect Turkey against Russian air power?

Turkey tried it with China, unsuccessfully. Now it might try to have another go, this time with Russia. Shrugging off admonitions of caution from its western allies, NATO-member Turkey shows unmistakable signs that it seeks to build a Russian-made air defense system.

Ankara’s desire to build a reliable, long-range air and anti-missile defense system is an age-old ambition. Nearly three decades after its first attempt, Turkey, situated in one of the world’s most volatile regions, still lacks that capability. But the government has not given up. It is still trying to purchase these critical systems, but from the wrong seller.

In the post-Cold War years of the early 1990s, the Turkish government and military planners decided that a solid air defense shield was a must. They wanted to buy Nike Hercules batteries, but that deal never materialized. Considering the scores of wars, near-wars, cold wars, confrontations, and conflicts that have occurred on its doorstep since then, Turkey was probably lucky never to have needed an air defense system.

Not purchasing one kept the taxpayers’ money in state coffers, so it was a wise decision. But the opposite is also true: The Turkish bureaucracy would have been first to be blamed if the Turks saw hostile foreign military aircraft and missiles in their skies with no capability to counter them.

In September 2013, in a move that astonished its western allies, the Turkish government selected China Precision Import-Export Corp. (CPMIEC) for its air defense program. CPMIEC’s $3.44 billion bid had beaten the Russian S-300/S-400 system; a US consortium of Lockheed Martin and Raytheon, maker of the Patriot system; and the European Eurosam, maker of the SAMP/T. The Russian bid was the first to be disqualified because the cost was “exorbitantly high.”

Under pressure from its NATO allies, Ankara scrapped the China deal and opened unofficial talks with the US and European contenders, including the three-nation (US, Germany and Italy) Medium Extended Air Defense System (MEADS). But once again shocking the West, Turkish Defense Minister Fikri Isik said on February 22 that talks between Ankara and Moscow for the potential acquisition of the Russian S-400 system had “made … progress.” “The S-400 [system] looks like the closest option,” Isik said. And President Recep Tayyip Erdoğan, after meeting with his Russian counterpart, Vladimir Putin, on March 9-10 in Moscow, said, “Russia has substantially lowered its bid (for the S-400 system). Our negotiations continue. We are in efforts to conclude (a deal) as soon as possible … If we cannot achieve these capabilities within NATO we must find a solution elsewhere.”

Sounds logical. But the idea of deploying Russian-made air defense systems for NATO airspace could be far more complicated than the Turkish leadership thinks.

Does that leadership underestimate the complexity or conflict of interest in making this attempt? Even leaving aside political frictions, including potential NATO member state restrictions on export licenses for Turkish weapons programs, the deployment of S-400 systems on Turkish soil could spell technical trouble for Ankara as well as for NATO.

About half of Turkey’s network-based air defense picture was paid for by NATO. Turkey is part of NATO’s Air Defense Ground Environment. Without NATO’s consent, it will be impossible for Ankara to make any non-NATO system, especially a Russian one, operable with these assets (the Turkish program consists of radar, launcher, and interceptor missiles).

Air defense architecture is not a stand-alone system like an assault rifle or a battle tank. Turkey, by going for the S-400s, looks like a customer wanting to buy a fancy and expensive mobile phone that cannot connect to any mobile operator’s network in his or her location. The mobile customer, Turkey, would have the hand device, but not the line. The Russians may be trying to sell to the Turks a mobile phone that has Wi-Fi connection so the customer thinks he can connect to the Internet and use applications like Skype or WhatsApp. But what will happen when the Turkish customer needs to use the mobile phone where there is no Internet connection? He will get a pre-recorded message from the nearest operator: “I am sorry. You are not subscribed to use this network. Please…”

This is essentially what will happen if Turkey actually deploys the S-400 system on its soil:

Since Turkey’s military assets will not be able to use the picture provided by NATO, the Turkish military will have a poor vision of the war theater. What was once a “long-range” air defense system will become a much smaller “regional” air defense system.
In the event of conflict, NATO’s aerial assets will not be able to fly in the vicinity of the deployed S-400s, and will thus fail to support ally Turkey. That will render the system unusable in conflict scenarios involving Russia, Iran, and Syria. And in the case of a conflict with Israel and the West (say, the EU), two S-400 systems will not be enough to protect Turkey from enemy firepower.
Take NATO’s Article 5, the principle of collective defense. NATO member states have come to Turkey’s defense in years past. In the most recent example, they deployed Patriot air defense systems to protect Turkey from potential air and missile attacks from Syria. But Article 5 works both ways. What if Ankara is required to support a NATO ally with its own air defense assets? What if, say, it is required to help Estonia by sending the Baltic nation its own air defenses against potential Russian aggression? How would a battle in which Turkish S-400s are used to defend against Russian air power be fair?
Ankara is going through a period of “normalization” with Moscow after the two were brought to a diplomatic crisis over the November 2015 downing of a Russian Su-24 on the grounds that it had violated Turkish airspace. Only a year and a half ago, the two states were on the brink of conflict in the Syrian theater. Today they seem to be sustaining a fragile peace. What if it falls apart over one of their hundreds of divergences in Syria or elsewhere – just when Ankara feels safer with its two S-400 batteries? Would Russian air defense assets protect Turkey against Russian air power?
A stand-alone air defense system cannot realistically intercept an enemy ballistic missile. Such systems typically require early warning data from a satellite, which will not work in the case of a stand-alone system. Turkey does not have such satellite detection capabilities and relies on NATO assets for that.
Ankara looks keen to buy a mobile phone with no connectivity to a mobile network operator. The move might be appealing to Moscow, as fresh Turkish cash would flow into Russian vaults. But it would scarcely deter any future Turkish-Russian dispute and will certainly not improve Turkey’s security.

Burak Bekdil is an Ankara-based columnist. He regularly writes for the Gatestone Institute and Defense News and is a fellow at the Middle East Forum.

Index of Experts for Media
Center associates can be contacted by the media for comment on issues in the news, referencing this index by topic of expertise. English Hebrew

The Oslo diplomatic process is the starkest strategic blunder in Israel’s history and one of the worst calamities ever to have afflicted Israelis and Palestinians. Twenty three years after its euphoric launch on the White House lawn, the Oslo ‘peace process’ has substantially worsened the position of both parties, and made the prospects for peace and reconciliation ever more remote.

Read more
The Return of the Russian Bear to the Middle East
June 5, 2016
Dr. Shai Har-Zvi

This study looks at the aggressive new posture in Russian foreign policy under President Vladimir Putin, in the wake of its intervention in Syria and the Crimean peninsula.

A review of the four rival camps into which the Middle East is today divided. 1. Iran with her proxies and allies; 2. Salafi Jihadists, currently dominated by the so-called Islamic State; 3. Muslim Brotherhood movement in its various manifestations, including Hamas, supported by Qatar and by Erdogan's Turkey; 4. The “forces of stability” -- all those who fear and resist the rise of the first three camps, with Israel an active and important player in this latter camp.

The storms now convulsing the Middle East are civilizational shifts of historical proportions. Anyone from the outside trying to influence these regional upheavals in a positive direction will find the task very difficult. Israel must focus narrowly on the greatest threat looming in its vicinity -- the Iranian drive for nuclear weaponry.