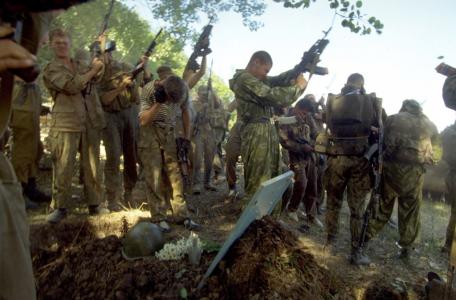 Moscow started to deploy Chechen special operations forces units to Syria this week, DEBKAfile’s military sources reveal. The troops come from elite units of the Chechen military with extensive field experience in urban warfare. Some of the units fought in eastern Ukraine in the past two years and, before that. in Chechnya for suppressing radical Islamic terror organizations linked to Al Qaeda and the Salafi movement.

The soldiers called up for the deployment in Syria were ordered to report to the Khankala base east of the Chechen capital Grozny. They are being vetted by Russian officers who determine which are suitable for the Syrian mission.
In the initial stage, the deployment will consist of three divisions totaling about 1,000 soldiers. Since like Russia, Chechen law bars regular army troops from being sent beyond the country’s borders, the soldiers assigned to Syria will wear the uniform of the Chechen Interior Ministry’s security forces, which are not part of the regular army.
They will be flown directly from the Russian air force facility at the Khankala base by giant Ilyushin-76 transport planes to Russia’s Hmaimim Air Base, about 1,200km away.
Moscow has never before dispatched a substantial number of ground troops to the Syrian battlefield.The deployment of the Chechen proxies has three goals:
1. To free the forces of the coalition supporting Syrian President Bashar Assad, including Russia, of responsibility for holding and defending territory they captured in Syrian cities, especially Aleppo.
2. To reinforce the Russian, Iranian, Syrian and Hizballah troops with highly-trained commandos capable of spearheading the next challenging battles in places like the Idlib region in the north and Darra in the south.
3. To save Russian President Vladimir Putin and Defense Minister Sergei Shoigu from having to send Russian ground troops to finish the Syrian war. The return of a rising number in coffins would set off a loud popular outcry against the government.
In the past month, three Russian servicemen lost their lives in Syria, including a colonel. Until now, the Russian military had sent only small groups of Spetsnaz (special forces) troops, whose task was confined to guarding Russian military, air and missile facilities in Syria.
The latest batch of Chechen fighters is not the first Moscow has dispatched to the Middle East. On Sept. 2, Russia’s Interfax news agency reported that “a self-organized group of young people from Chechnya had undertaken to combat the terrorist organizations.” They were described by Russian spokesman as young people who had offered to gather information on Russians and Chechens who had joined ISIS. In other words, they had “volunteered” to infiltrate ISIS units as spies. What befell those young people was never reported.
http://debka.com/article/25828/Russia-flies-Chechen-commandos-to-Syria