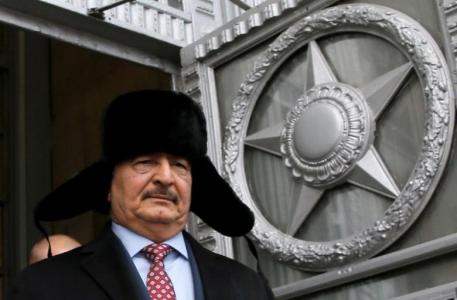 Russia appears to have deployed special forces to an airbase in western Egypt near the border with Libya in recent days, U.S., Egyptian and diplomatic sources say, a move that would add to U.S. concerns about Moscow's deepening role in Libya.

The U.S. and diplomatic officials said any such Russian deployment might be part of a bid to support Libyan military commander Khalifa Haftar, who suffered a setback with an attack on March 3 by the Benghazi Defence Brigades (BDB) on oil ports controlled by his forces.

The U.S. officials, who spoke on condition of anonymity, said the United States has observed what appeared to be Russian special operations forces and drones at Sidi Barrani, about 60 miles (100 km) from the Egypt-Libya border.

The apparent Russian deployments have not been previously reported.

The Russian defense ministry did not immediately provide comment on Monday and Egypt denied the presence of any Russian contingent on its soil.

"There is no foreign soldier from any foreign country on Egyptian soil. This is a matter of sovereignty," Egyptian army spokesman Tamer al-Rifai said.

The U.S. military declined comment. U.S. intelligence on Russian military activities is often complicated by its use of contractors or forces without uniforms, officials say.

Reuters could not independently verify any presence of Russian special forces and drones or military aircraft in Egypt.

Mohamed Manfour, commander of Benina air base near Benghazi, denied that Haftar's Libyan National Army (LNA) had received military assistance from the Russian state or from Russian military contractors, and said there were no Russian forces or bases in eastern Libya.

Several Western countries, including the U.S., have sent special operations forces and military advisors into Libya over the past two years. The U.S. military also carried out air strikes to support a successful Libyan campaign last year to oust Islamic State from its stronghold in the city of Sirte.

Questions about Russia's role in north Africa coincide with growing concerns in Washington about Moscow's intentions in oil-rich Libya, which has become a patchwork of rival fiefdoms in the aftermath of a 2011 NATO-backed uprising against the late leader Muammar Gaddafi, who was a client of the former Soviet Union.

The U.N.-backed government in Tripoli is in a deadlock with Haftar, and Russian officials have met with both sides in recent months. Moscow appears prepared to back up its public diplomatic support for Haftar even though Western governments were already irked at Russia's intervention in Syria to prop up President Bashar al-Assad.

A force of several dozen armed private security contractors from Russia operated until February in a part of Libya that is under Haftar's control, the head of the firm that hired the contractors told Reuters.

"They're working to influence that," Waldhauser told the Senate Armed Services Committee on Thursday.

Asked whether it was in the U.S. interest to let that happen, Waldhauser said: "It is not."

One U.S. intelligence official said Russia's aim in Libya appeared to be an effort to "regain a toe-hold where the Soviet Union once had an ally in Gaddafi."

"At the same time, as in Syria, they appear to be trying to limit their military involvement and apply enough to force some resolution but not enough to leave them owning the problem," the official added, speaking on the condition of anonymity.

Russia's courting of Haftar, who tends to brand his armed rivals as Islamist extremists and who some Libyans see as the strongman their country needs after years of instability, has prompted others to draw parallels with Syria, another longtime Soviet client.

Asked by U.S. Senator Lindsey Graham whether Russia was trying to do in Libya what it did in Syria, Waldhauser said: "Yes, that's a good way to characterize it."

A Western diplomat, speaking on condition of anonymity, said Russia was looking to back Haftar, although its initial focus would likely be on Libya's "oil crescent."

"It is pretty clear the Egyptians are facilitating Russian engagement in Libya by allowing them to use these bases. There are supposedly training exercises taking place there at present," the diplomat said.

Egypt has been trying to persuade the Russians to resume flights to Egypt, which have been suspended since a Russian plane carrying 224 people from the Red Sea resort of Sharm al-Sheikh to St Petersburg was brought down by a bomb in October 2015. The attack was claimed by an Islamic State branch that operates out of northern Sinai.

Russia says that its primary objective in the Middle East is to contain the spread of violent Islamist groups.

Russian Foreign Minister Sergei Lavrov pledged this month to help unify Libya and foster dialogue when he met the leader of the U.N.-backed government, Fayez Seraj.

Russia, meanwhile, is also deepening its relations with Egypt, which had ties to the Soviet Union from 1956 to 1972.

The two countries held joint military exercises - something the U.S. and Egypt did regularly until 2011 - for the first time in October.

Russia's Izvestia newspaper said in October that Moscow was in talks to open or lease an airbase in Egypt. Egypt's state-owned Al Ahram newspaper, however, quoted the presidential spokesman as saying Egypt would not allow foreign bases.

The Egyptian sources said there was no official agreement on the Russian use of Egyptian bases. There were, however, intensive consultations over the situation in Libya.

Egypt is worried about chaos spreading from its western neighbor and it has hosted a flurry of diplomatic meetings between leaders of the east and west in recent months.