Russia, Turkey, and Iran: Cooperation and Competition in Syria 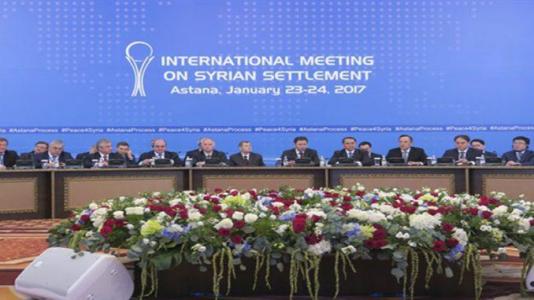 The meeting between Iran, Turkey, and Russia in Astana, Kazakhstan on January 23-24, in advance of the next round of U.N. sponsored Geneva III meetings,[1] has been characterized as a new anti-West axis meant to marginalize the U.S. in Syria and the region.[2] Yet Moscow’s reset with Ankara is not primarily directed at the West; rather, Russia is trying to reestablish itself as Syria’s ultimate arbiter.

Since September 2015, Iran and Russia’s military support — boots on the ground and air power, respectively — have ensured the al-Asad regime’s survival in Syria.[3] However, since the failed U.S.-Russia attempt to impose a ceasefire agreement in Aleppo in August and September,[4] gaps have emerged between Iran and Russia on a vision for the way forward.[5] This led Russia to support Turkey’s August military incursion into northern Syria in order to provide Moscow with a stronger hand in shaping a political settlement to the war. To that end, it reconciled with Turkey to reduce Iran’s influence and constrain the Asad regime, limiting Asad’s ability to maneuver between Russia and Iran.[6] At the same time, Turkey and Iran’s competing regional interests allow Russia to serve as the broker between them because Russia enjoys better relations with both Turkey and Iran than they enjoy with one another. Russia is locking in its strategic military gains with the Asad regime, while limiting both Iran and Turkey’s ability to shape outcomes in Syria without Russia’s approval. Ultimately, Russia still intends to use its political influence in Syria as an international, rather than regional, bargaining chip. It wants to reduce constraints the West has imposed on it in the Crimea, Ukraine, and elsewhere, while bolstering its image as a global power.

Russia’s recalibration in Syria began in August and September 2016. The Asad regime, together with Iran, resisted Russian-U.S. efforts to impose a ceasefire agreement, which the Asad regime and its allies viewed as preventing it from crushing the rebels in Aleppo.[7] Asad’s September 2016 statement that he was determined to retake “every inch” of Syria was a repetition of the same vow he made in February 2016 that met with a public Russian rebuke.[8] According to political analyst Vladimir Frolov, Russia found itself unable “to ensure the fulfillment by its client of the obligations undertaken by Moscow to the United States and the UN Security Council,” which threatened to undermine “its claims to the role of an irreplaceable great power.”[9] In other words, Asad’s defiant behavior as an unruly client threatened Russia’s plan to lock in its gains in Syria, “as it slow-rolled negotiations to make enough time for eliminating the opposition.”[10]

Asad and his allies have taken back only two percent of the territory the regime has lost since the rebellion began in 2011. And while these gains constitute the bulk of “useful Syria,” there are good reasons for the regime to want to regain control of all of its territory. There are valuable hydrocarbon, agricultural, and water resources in the areas under Islamic State (IS) control.[11] Nevertheless, the regime is incapable of doing so on its own. The Syrian Arab Army has two or three elite units, and the rest of its forces operate as competing, and often independent bodies.[12] The regime has relied heavily on the Russian air force, as well as Russian Special Forces and private military contractors. On the ground, Iranian Special Forces, Lebanese Hizballah, as well as Afghani Shiʿa (Fatimid Brigade) and Pakistani Shiʿa (Zaynab Brigade) militiamen, under Iranian direction,[13] have supplemented the regime’s dwindling manpower.[14] Moscow tried to reduce Iranian authority and reassert control over Asad by bringing some of the militia forces under a single Syrian Army command, but this effort failed.[15]

Therefore Moscow, seeking more control over its partners in Syria, turned to Turkey, with which relations had reached a nadir following Turkey’s downing of a Russian fighter jet in November 2015.[16] The initial Turkey-Russia reset took place in early August 2016, when Turkey’s President Erdoğan traveled to Russia to meet with President Putin.[17] This meeting was reminiscent of Qassem Suleimani’s visit to Moscow in July 2015,[18] which led to Moscow and Tehran’s military escalation two months later.[19] Two weeks after Erdoğan’s meeting with Putin, on August 24, Turkey sent its military into Syria as “Operation Euphrates Shield,” which Ankara declared an anti-IS operation, but in reality was meant to prevent the Syrian Kurds from establishing contiguous territorial autonomy along Turkey’s southern border.[20] The Turkish offensive was not coordinated with the U.S., which was supposed to be leading the coalition against the IS in Syria.[21] On September 21, Erdoğan, in a sharp departure from his consistent public rhetoric calling for Asad’s ouster, did not mention Asad once during a 30-minute address to the U.N. General Assembly. On October 5, two days after the final breakdown in diplomatic efforts between Russia and the U.S., Putin and Erdoğan discussed Syria on the phone.[22]

Turkish journalist Nuray Mert argued that the Turkish-Russian “rapprochement” was not a case of the two parties moving closer to one another, but rather Turkey moving closer to Russia on Syria and other issues.[23] Yet Russia and Turkey’s “marriage of convenience,”[24] appears to serve both of their interests in Syria. Turkey obtains a free hand in northern Syria to stymie the territorial ambitions of the U.S.-supported Syrian Kurds, while Russia gets a compliant partner that will constrain Iran’s influence and help wind down the conflict by co-opting portions of the “revolutionary” (as opposed to jihadist) anti-Asad Sunni opposition.[25] Turkish military forces on the ground in northern Syria, supported by Russia air power, also provide Moscow with the means to limit the ambitions of both the Kurds and Iran in Syria, without expending a great deal of Russian blood or treasure. Further, intelligence sharing between the two countries has allowed them to begin conducting joint air strikes against Islamic State targets in Syria.[26] In the wake of the regime’s brutal victory against the opposition in Aleppo, Turkey was even able to coordinate with Moscow on the deployment of a battalion of Russian Chechen (Sunni) military contractors to protect humanitarian staff and Russian sappers in place of regime forces or Iranian-financed Shiʿi militias.[27]

In December, Russia demonstrated its new leverage as the arbitrator between Shiʿi Iran and Sunni Turkey in Syria. At Turkey’s request, Russia facilitated the humanitarian evacuation of more than 37,000 Sunni civilians from Aleppo to Idlib Province. As a fig leaf to Iran, which only learned of the evacuation after it was underway, Russia and Turkey coordinated the evacuation of pro-regime residents of the towns of Fua and Kefraya in Idlib Province to the pro-regime towns of Zabadani and Madaya near Damascus, along the Lebanese border, after living under Sunni rebel siege for more than 18 month.[28] The trilateral coordination between Iran, Russia, and Turkey was formalized in the eight-point Moscow Declaration that Iran, Russia, and Turkey agreed to as a roadmap to end the Syrian War;[29] on December 31 the U.N. gave its stamp of approval to the declaration.

Some view the Moscow Declaration, as a sign of the growing strength of Russian-Iranian relations.[30] Russian officials have promoted Turkish-Russian military cooperation as a means of peeling Turkey away from the West to form a more effective Iran-Russia-Turkey “axis.”[31] But this view excessively downplays the existing mistrust and rivalry between the three of them.

While each of the three shares a commitment to preserving the territorial integrity of Syria (the first point of the Moscow Declaration), they have diverging interests. Turkey’s priority is preventing a Kurdish PYD-PKK[32] bloc along its border in Syria and Iran.[33] Nevertheless, Turkey has supported elements of the Syrian opposition for the past five years and will not simply abandon them, without first trying to bring them into the political process. Turkey’s ties to the Syrian opposition, which Russia views as an asset in its efforts to broker a political solution, are viewed with deep skepticism if not outright hostility by Iran. An editorial in the hardline Iranian newspaper, Jomhuri-ye Eslami, noted that “reports and news received from the borders of Turkey and Syria demonstrate that Ankara is continuing with its main role of strengthening the terrorists' military stamina.”[34]In fact, Moscow’s turn to Turkey should be viewed as an indication that there are important differences between Moscow and Tehran regarding the way forward in Syria.[35]

Iran and the Asad regime are not keen on transforming the Aleppo ceasefire into a permanent national ceasefire, as outlined in the Moscow Declaration. They would like to stay on the offensive, using a temporary ceasefire to prepare for continuing the war against the opposition in northwestern Idlib Province. Taking Idlib would allow Iran to secure its land bridge, or “Sunni-free corridor,” from Tehran to the Syrian coast and it would create a territorial buffer zone to protect Latakia Province, which is the ʿAlawi heartland and the Asad’s regime’s stronghold.[36] Iran also wants to create a stronger Shiʿi demographic in the Syrian territory between Damascus and the Lebanese border, repopulating this strip of formerly Sunni territory with Shiʿis.[37] While Russia may not object to these goals, it is not willing to assume the military or financial burden that may be required to bring them to fruition. More broadly, Iran and Russia have different objectives when it comes to the future of the Syrian regime.

Iran would like to ensure that the Syrian regime becomes its fully subordinate client by engineering the Lebanonization of Syria, which would mean a government with weak institutions that is beholden to Iran.[38] One of the reasons that Putin would like to see a plan for political transition in Syria is that new leadership in Syria would not feel indebted to Iran to the same degree that Asad is today. Andrey Kortunov, director general of the Russian International Affairs Council, even suggested that Russia had already identified several candidates to succeed Asad.[39] Further, transferring power away from the Asad family and strengthening Syria’s institutions of governance would prevent a Quds Force (the special unit of the Iranian Revolutionary Guard Corps. responsible for foreign operations) takeover of the Syrian state and provide Russia with a long-term means to preserve its influence. Russia is seeking a political agreement that would stabilize the central government and wind down the fighting between the regime and the opposition in territory it considers “useful Syria.” According to unnamed Russian sources, “the idea would then be to get Gulf states involved, then the United States, and at a later stage the European Union which would be asked, maybe with the Gulf states, to pick up the bill for rebuilding.”[40] A political transition would allow Russia to preserve an institutional framework in Syria that enables Russia to maintain its political influence and expand its military facilities there, which constitute its strategic hub in the Eastern Mediterranean.[41]

Russia goals in Syria transcend Syria. Putin does not simply want to prop up Asad indefinitely, while slaughtering the opposition.[42] The so-called “Grozny Rules”[43] and the comparison to Chechnya[44] is a fair one, but limited because Syria is not sovereign Russian territory. Russia ultimately views Syria as a means to a broader geopolitical end. A new U.S. administration offers Putin an opportunity to use its influence in Syria to make headway on other issues that may be more important to him. To be sure, Russia is not looking for a way out of Syria. Indeed, the Syrian War has allowed Russia to regain much of the political influence in the region that it lost to the U.S. in the late 1970s.[45] Therefore, Russia brought Turkey into the diplomatic process to limit both Iran and Asad’s freedom of action, as well as ensure that Moscow has the final word in any political settlement to the conflict.

Brandon Friedman is a Researcher at the Moshe Dayan Center (MDC) for Middle Eastern and African Studies, Tel Aviv University.