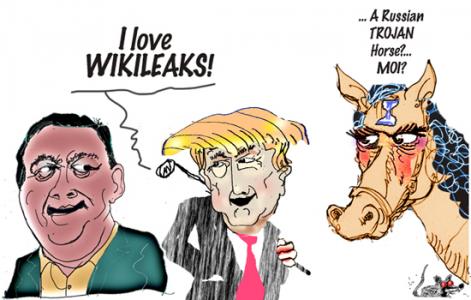 In a series of tweets, Edward Snowden confirmed the CIA program and said code names in the documents are real; that they could only be known by a “cleared insider;” the FBI and CIA knew all about the digital loopholes, but kept them open to spy; and that the leaks provided the “first public evidence” that the US government secretly paid to keep US software unsafe.

If that’s not serious enough, WikiLeaks alleges that “the CIA has lost control of the majority of its hacking arsenal;” several hundred million lines of code — more than what is used to run Facebook.

Someone among the former US government hackers and contractors ended up leaking portions of the CIA archive (Snowden II?). WikiLeaks also stressed how the CIA had created, in effect, its “own NSA” – maximum unaccountability included.

And still, vast corporate media sectors embedded with the neocon/neoliberal galaxy are spinning that Vault 7 benefits Trump by changing the subject from alleged Russian hacking interference in the US elections and possible Obama administration-ordered hacks of Team Trump’s communications.

So, if anyone hasn’t got the message, the song remains the same.
WikiLeaks + Snowden + Russia + Trump = the bad guys. CIA deploying its own NSA around the world = the good guys. After all, CIA spokesman Jonathan Liu duly issued a non-denial denial.

May I have an Orwellian iPhone, please?

As we’re mired deep in an Orwellian total screen environment, already conceptualized by Baudrillard in the go-go 1980s, nothing so trivial as the technical proof we’re all being spied upon could alter the (im)balance. The US is already ravaged by a vicious sociopolitical war – and no “threat” to established narratives allows for nuance.

The implication is that, as it stands, there won’t be a US-Russia reset anytime soon – despite hosting invitations from Iceland, Finland or Slovenia; the neocon/neoliberal galaxy nestled in powerful deep state factions will do their best to deny it.

It hardly matters that Trump absolutely does not want war: his entire domestic US economy remix could not possibly allow it. The Pentagon now is essentially an extended special ops unit: it cannot possibly fight a land war (Iran? North Korea? Ukraine?)

Russia, on the other hand, would be ready for war if needs be. The S-500 missile defense system is being deployed: some analysts (not the Ministry of Defense) are sure it’s already protecting the whole Russian landmass. China, by 2021, will have more than 1,000 very mobile warheads, or hidden in those submarines lounging in Hainan. By that time, both Iran and Pakistan will be deep into a strategic defense network with Russia-China, via the Shanghai Cooperation Organization, shielded with their own S-400 and S-500 systems.

Putin is not playing chess. He’s playing Go — and if we look at the board, reality is indeed painful.

Moscow is all but deciding the practical future of Syria, in Astana. Russia virtually wrote the Minsk II agreements, routinely broken by Kiev. Crimea as part of Russia is a fait accompli. Novorossiya for all practical purposes is already a totally autonomous region, with the economy working in rubles. Erdogan owes his imminent regime change in reverse – a presidential sultanate? – to Putin, as Russia warned him about the military coup hours in advance, according to several Russian media sources. Moscow protected Iran’s energy industry during the hardcore OPEC negotiations. Putin all but designed the Russia-China strategic partnership.

Beijing has managed to convince Moscow that One Belt, One Road and the Eurasia Economic Union should be connected, merged and tackled as a win-win Eurasia integration process. If Russia eventually loses economic preeminence across the Central Asian “stans,” it maintains its paramount military/security status.

Russian Foreign Minister Sergei Lavrov never ceases to stress that “our relations with China are at their best level ever in our two countries’ history.”

Add to it a geo-economic gambit; hints of key factions of European business elites getting ready to hitch themselves to China’s growing – slowly but surely – monetary/financial clout, linked to Beijing’s imperative of preventing a collapse of global supply chains. Xi Jinping’s “inclusive globalization,” announced in Davos, sounds more and more like a reality in the making.

In contrast to reality, where China-Russia expand their strategies without exceptionalist illusions, 24/7 neocon/neoliberal hysteria offers a constant barrage of childish, pathetic eruptions. As the self-delusion school of foreign policy refuses to admit Moscow will not sell out China and Iran for a deal with Washington, the last refuge of the scoundrels is cognitive dissonance; fear of Russia incited to cold war 2.0 heights.

So, relax, global citizen; the CIA is benign and benevolent, even when they’re watching you. You have nothing to fear but fear itself – and its name is Russia.