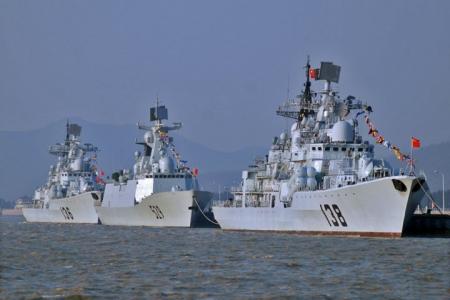 By Michael Brady
Reports last week said Japan will send a helicopter carrier into the hotly contested South China Sea in May. The carrier Izumo is based in Yokosuka and its mission is primarily anti-submarine warfare.

Izumo will patrol the South China Sea and make several stops, including Singapore, Indonesia, and the Philippines. The carrier will eventually sail into the Indian Ocean to conduct joint naval exercises in July with India and the United States.

Japan’s decision to deploy Izumo is prudent and comes when the US and its allies in the region want to send a clear signal to Beijing: Freedom of navigation (FON) operations will not be disrupted. Japan and China do not hold competing claims in the South China Sea.

China and its South China Sea rivals (Vietnam, Taiwan, Brunei, Malaysia and the Philippines) are fiercely competing over vast swaths of the waters rich in oil, natural gas, and fisheries. Tensions have escalated in recent months and the international community wants to see diplomatic efforts take hold to ensure a peaceful resolution of disputes.

Beijing has expressed concern over the deployment. However, its official response last Tuesday was wise. Hua Chunying, spokeswoman for the Chinese foreign ministry said: “If it’s only a normal visit, going to several countries, and passing normally through the South China Sea, then we’ve got no objections, and we hope this kind of normal exchange between relevant countries can play a role promoting regional peace and stability.”

Beijing’s carefully crafted and sensible response is welcome. By supporting Japan’s deployment, Beijing has clearly indicated it supports freedom of navigation operations and made a first step in calming fears. It’s now the turn of Washington and Tokyo to respond in kind.

Tokyo would be smart to clearly articulate its decision to deploy Izumo. It’s clear Japan is joining the United States in patrolling the South China Sea to ensure freedom of navigation is not restricted. About US$5 trillion dollars of goods flow through the disputed region annually.

Tokyo should publicly state its intention and reassure Beijing to prevent any potential miscalculations between the two powerful navies. President Donald Trump and his administration should welcome the remarks publicly. This will satisfy Beijing in the short run and continue overt diplomatic efforts.

More warships in the South China Sea will make observers nervous. Increasing the number of military assets in the region intuitively means the potential for a miscalculation only rises.

Those fears should be assuaged.

A strong naval presence in the region will prevent Beijing from taking military action against its lesser rivals. While Beijing remains “contained,” it can still search for oil and gas while fishing in disputed waters. Beijing should understand that Washington and its allies will not obstruct efforts to access the resources in the South China Sea. Doing so, would surely escalate tensions and increase the possibility of war.

War in the South China Sea is not inevitable. A nuclear-armed China is showing restraint, and Tuesday’s comments should be a welcoming development for both Washington, rival claimants, and other allies with similar strategic interests. If Washington and Tokyo adopt a similar tone, military escalation between the two nuclear rivals will be prevented.

Both sides must continue diplomatic efforts to find peaceful solutions to the resource issue in the South China Sea while freedom of navigation remains unhindered.

A scenario which includes China and Washington going to war over the South China Sea where nuclear weapons are fired is remote. However, this “doomsday” is possible if Tokyo and Washington do not make their intentions clear.