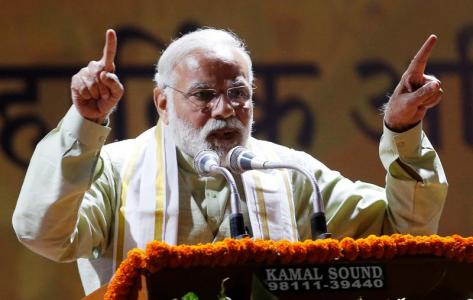 Short of actually winning a national election, UP is undoubtedly the biggest prize on the electoral map. Home to more than 200 million people, if UP were a country, it would be the world’s fifth largest. It is also the metaphorical heart of the Hindi heartland, the home state of many a prime minister, and a coveted political stronghold. Over the last few weeks, the state has been plastered with Modi’s face; his words boomed over countless loudspeakers. More than a vote for the BJP, this was a vote for Modi. The results create more political space for the BJP to govern, and they improve the party’s electoral prospects ahead of the 2019 general elections. Meanwhile, they also add momentum to efforts to recast the party in Modi’s mold.

The first and most obvious takeaway from the BJP victory is that Modi is the most popular politician in India, and by a long shot. There is simply no opposition politician, either in New Delhi or in the state capitals, who comes close. Indeed, right now Modi is able to garner more votes than any other democratic leader on the planet. And that is despite his surprise decision last November to immediately invalidate high-denomination rupee notes (accounting for the vast majority of Indian currency) in an effort to crack down on black money. The demonetization maneuver has been widely derided by economists for its questionable rationale. It was criticized by voters for its bungled implementation, which saw Indians struggle to find cash to carry out everyday transactions.

But at the end of the day, popular disquiet appears to have been trumped by countervailing impulses. Namely, many ordinary Indians apparently took enormous glee at the prospect that the sudden invalidation of high-denomination currency notes would put fat cats with large cash holdings in a bind. Modi “may have hit us in one eye,” one farmer remarked to the Financial Times, “but he hit the rich in two eyes.” Meanwhile, there seems to be a belief that, although Modi’s plan to revitalize the Indian economy has not been an unambiguous success, at least he is genuinely trying to make improvements—which is more than can be said of others. As the old adage goes, you can’t beat something with nothing.
The second crucial takeaway is that the BJP ran a superior campaign. Some analysts have argued that this election sounded the death knell for dynasty, strongmen, identity politics, and other perceived infirmities of Indian democracy because Modi’s aspirational appeals transcended such parochial concerns. Nothing could be further from the truth. Modi’s BJP skillfully deployed all of these familiar tropes, but did so far more effectively than its rivals. Under the watchful eye of BJP president and Modi right-hand Amit Shah, the party mixed a well-crafted cocktail of caste calculations, majoritarian sentiment, aspirational rhetoric, muscular nationalism, and charismatic leadership.

One day, Modi catered to his Hindu base by accusing the incumbent Samajwadi Party (SP) of pandering to Muslims: “If there is electricity in the graveyard and during Ramadan, it must also be available in a crematorium and during Diwali.” The next, he promised jobs for the underdeveloped state’s youth, proclaiming that it isn’t fair for the rest of the country to progress while Uttar Pradesh gets left behind. All the while, the party skillfully stitched together a rainbow coalition of Hindu castes (nary a Muslim was given an invitation to the BJP ticket). Leaving nothing to chance, the party spent two years honing its ground game—allegedly enlisting at least ten party workers for each of the state’s 147,000 polling booths, creating 10,000 WhatsApp groups to spread its message, and organizing 900 election rallies.

Third, Modi was greatly aided by the opposition’s shortcomings. The incumbent SP, a family-run outfit that has been deeply entrenched in UP politics for decades, imploded in a spectacle fit for a Greek tragedy just as the campaign began heating up. A fight over the party’s future rapidly descended into a familial civil war among members of the powerful Yadav political dynasty. As if that were not enough, the opposition was also divided. Two of the three major non-BJP political forces—the SP and the Congress Party—joined hands to block the Modi juggernaut, but the third—the pro-Dalit Bahujan Samaj Party (BSP)—demurred, effectively splitting the opposition vote.

In the weeks to come, innumerable opinion columns will dissect the minutiae of the campaign. The BJP will study its game to see how it can be improved and replicated; the party’s opponents will choose either to learn from their mistakes or engage in a never-ending series of recriminations. If the last few days are any indication, we will see more of the latter. Already, the BSP has blamed its loss on fraudulent electronic voting machines, and the SP is cursing its alliance partner for dragging it down.

A far more interesting question is what this election tells us about where Indian politics are heading. First, as it nears its three-year anniversary in New Delhi, the BJP has further cemented its position as the pole around which Indian politics revolves. In 2012, the BJP and its allies controlled eight states, while Congress and its friends ran 14. Today, these roles have reversed: BJP-aligned governments will soon control as many as 16 states. The pro-Congress tally has shrunk to just six. The BJP is sitting pretty as it turns its gaze toward 2019’s general election. Indeed, Omar Abdullah, a prominent former chief minister of Jammu and Kashmir, tweeted, “At this rate we [the opposition] might as well forget 2019 & start planning/hoping for 2024.”

Congress, which had for decades dominated Indian politics, is a shadow of its former self. When the party was trounced in the 2014 general elections, there was a consensus that if it resolved two existential challenges—that of leadership and ideology—it could regain its former glory. It is shocking how little progress the party has made on either front. A significant share of the blame must fall on the shoulders of the dynastic party’s peripatetic scion, Rahul Gandhi, for failing to articulate a vision for rebuilding the party.

Beyond Congress, India’s federal politics is home to a litany of regional players, but they have yet to coordinate in a way that could pose a genuine threat to the BJP on a national scale. The new kid on the block, the anti-corruption Aam Aadmi Party, has governed Delhi since 2015 but fared poorly in last weekend’s elections, exposing limits to its appeal.

Second, the verdict will have a direct impact on next summer’s presidential elections and the political composition of the upper house of Parliament, the Rajya Sabha, whose members are indirectly elected by India’s state legislatures. The latter is especially noteworthy, since the BJP has struggled to push its legislative priorities in the upper house, where it remains a minority. Because upper house elections occur on a staggered timetable, the ruling alliance will attain an outright majority by 2019 as its numbers incrementally improve over the coming years. The tipping point will roughly coincide with the start of a putative second term, giving the BJP’s legislative agenda a boost.

Third, one of the guiding mantras of the Modi government has been “competitive federalism,” or the idea that states should be at the leading edge of policy experimentation. Over time, the argument goes, reformist states that show results will kick off a virtuous cycle by inspiring others to follow suit. Gaining control of an additional four states gives the BJP greater opportunity to push its states-first agenda.
The editorial pages of India’s leading business dailies are hopeful that the BJP’s recent electoral victories mean that the party will finally unleash its version of a libertarian economic paradise, including privatizing loss-making state-owned enterprises, enacting land and labor reforms, and eliminating costly subsidies. But that’s unlikely to happen. Yes, the BJP will be better positioned in parliament, but it is far from a monolith, and its nationalist, protectionist wing will also demand a pound of flesh. Although the BJP’s grip on regional politics has reached a new apex, it still only controls half of all state assemblies. And perhaps most important, it is not clear that Modi believes sweeping, market-friendly reforms are necessary. To date, the prime minister’s pronouncements have been much more pro-business than pro-market. For example, his government has done little to shed loss-making public sector firms, preferring instead to bring in new, professional managers.

For now, Modi and the BJP can bask in the afterglow of a major electoral achievement. No party has vanquished its rivals in UP in this manner in 40 years, and that too was in the wake of Indira Gandhi’s disastrous Emergency Rule. Judged against the very high bar of its 2014 national performance, the ruling party’s standing has held up reasonably well. The BJP, in short order, has remade itself in the image of Modi. As the case of Gandhi reminds us, such a strategy is laden with long-term risk. But in the short term, the party has decided to ride the wave