Isolationism is a noble American tradition 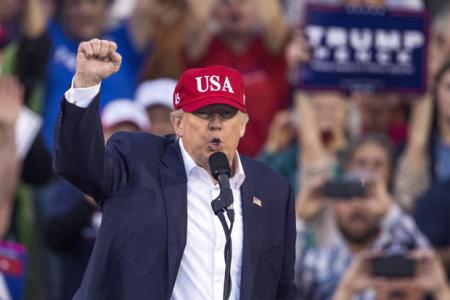 ‘Why are we over there?’ is a question asked by working-class and rural families
Bill Kauffman
The presidential campaign just ended was mercifully lacking in the ghostwritten platitudes with which Franklin D. Roosevelt, John F. Kennedy, and Ronald Reagan lull readers of Bartlett’s Familiar Quotations to sleep.

Hillary Clinton’s only memorable utterance was her defamation of one quarter of the electorate as a ‘basket of deplorables’ — a curiously clumsy locution that effectively conveyed her contempt for American prole-dom and sunk her candidacy. Donald Trump’s best line was his dismissal of the foamingly bellicose Republican senator John McCain, who has built a career on his stint as a prisoner of war in Vietnam. ‘He’s not a war hero,’ said Trump. ‘I like people who weren’t captured.’ That outrageous exercise in lèse-majesté, and not his lurid remarks about illegal immigrants from Mexico, was the first real sign that we were dealing with a man who could walk through walls.

The most endearing statement by a candidate this election cycle, though, came from the Libertarian party’s standard-bearer, the former New Mexico governor Gary Johnson. When asked on one of those dismal cable network shows about the conflict in Syria’s largest city, Governor Johnson replied, ‘What is Aleppo?’

Poor Gary. His question-as-answer contained the germ of peace and wisdom, yet all he got was mockery by the blonde TV anchor babes and the callow opinionators of the Manhattan-Washington axis. For when it comes to remote hotspots, ignorance is not only bliss, it is also the trait that once made America not great, as Trump would have it, but good. You can be sure that millions of Vietnamese wish that Lyndon B. Johnson had remained blissfully ignorant of Hue, and oh, if only George W. Bush had stuck to his baseball box scores and never learned the location of Baghdad.

Gary Johnson stumbled into one of the great suppressed truths in American politics: most of us don’t give a damn about Albania, Algeria or Aleppo. (I confess to breaking ranks on Aleppo, but only because that’s where my late father-in-law grew up — quite happily, too, though in recent years it has been largely depopulated of its Armenians, who wish devoutly that the world-remoulding marplots of western neoliberalism had never heard of that tragic city.)

This is, I will be told, isolationism. Damn right it is. It has coursed through the veins of most red-blooded Americans since George Washington, who in his farewell address warned his countrymen against ‘foreign alliances, attachments, and intrigues’. This tradition isn’t belligerent or xenophobic: ‘-isolationists’ are the people who are opposed to killing foreigners. But to the disgust of editorial writers, they’d rather tend their own gardens than meddle in antipodal affairs.

As a North Carolinian remarked of US intervention in the first world war in Thomas Wolfe’s novel Look Homeward, Angel (1929), ‘It’s not our fight. I don’t want to send my boys three thousand miles across the sea to get shot for those foreigners. If they come over here, I’ll shoulder a gun with the best of them, but until they do they can fight it out among themselves.’

‘Why are we over there?’ is the question asked around the dinner tables of working-class and rural families — the Deplorables whose sons (and now daughters) are vastly overrepresented in the US armed forces. No one at elite levels bothers answering them: the exigencies of empire are not fit subjects for the hoi polloi. Go back to your lottery tickets and stock-car races!

We are over there because, to the architects of US foreign policy, not a sparrow falls to the ground without the knowledge of what former Secretary of State Madeleine Albright called the Indispensable Nation. The American hegemon is, as commercials for the US navy used to say, ‘a global force for good’. (That ad campaign was recently dropped after the Rasmussen polling service found that only 20 per cent of Americans believe that the navy should be a ‘global force for good’, while 70 per cent want it to ‘protect and defend the United States’. Isolationists!)

Attachment to a place, dedication to its integrity, compels a deep suspicion of war and empire, which are brutally centripetal forces. In caring for one’s own block, one is disinclined to favour the invasion of Iraq. Deplorable Americans have a sense of scale, of the practicable limits of love and action; they are the backbone of volunteer fire departments and coach their kids’ Little League teams but they really don’t give a flying fig about Fallujah or Sanaa.

There is nothing anti-intellectual or obscurantist about looking homeward; it’s human nature, and it conduces to peace and amity among nations, too.

You can bet that a substantial number of the placeless talking heads who ridiculed Gary Johnson for his fogginess on Syrian toponymy are unable to name their neighbours’ children, or tell you a single thing about the history or culture of the city in which they chase their careerist tails — other than real-estate prices, of course, and the directions to the nearest Whole Foods store.

These rootless courtiers are so out of touch with life as it is actually lived in the vast gut of America that they were astonished that anyone, let alone 63 million anyones — nobodies, in their view — could vote for Donald Trump, the candidate who called the Iraq war a ‘disaster’ and promised to put the well-being of ordinary Americans ahead of the balance sheets of transnational companies and global glitterati. (His cabinet choices during this interregnum suggest that Trump has rather different priorities. But then Pete Townshend warned us 45 years ago about the new boss.)

As it happens, I spent a day with Gary Johnson in 2008 in Excelsior, Minnesota, the town in which, local lore has it, Mick Jagger ran into a fey drugstore patron named Jimmy who was looking on the bright side of not getting his daily cherry cola, and thus was born ‘You Can’t Always Get What You Want’. Is it true? Well, as the editor says at the end of John Ford’s The Man Who Shot Liberty Valance, ‘When the legend becomes fact, print the legend.’

The legend that our corporate media feed the world is that Americans are either jingoistic morons or sanguinary idealists à la President Woodrow Wilson, who dragged us into the first world war to ‘make the world safe for democracy’. But the fact is that many of us remain (George) Washingtonians. Like Gary Johnson, we don’t know what Aleppo is, and while we bear it no ill will, we wish to squander neither lives nor treasure thereupon. If our rulers shared the salutary nescience of the Deplorables, Syria — and the world — would be so much better off.

Bill Kauffman is the author of 11 books, among them Dispatches from the Muckdog Gazette and Ain’t My America.