Islamization and Demographic Denialism in France 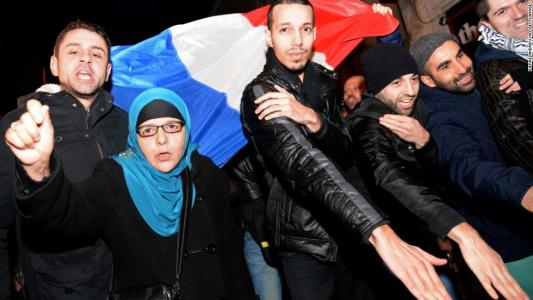 by Michel Gurfinkiel
Excerpt of an article originally published under the title "Latest Survey Finds 25% of French Teenagers Are Muslims."

A recent survey finds that 25% of French teenagers are Muslims.
One of the most striking cases of reality denial in contemporary France is demography: issues like birthrate, life expectancy, immigration, and emigration. On the face of it, you can hardly ignore such things, since they constantly reshape your environment and your way of life. Even without resorting to statistics, you are bound to perceive, out of day-to-day experience, what the current balance is between younger and older people, how many kids are to be found at an average home, and the ethnicity or religion of your neighbors, or the people you relate to at work or in business.

The French elites, both on the right and left, managed for five decades at least to dismiss the drastic demographic changes that had been taking place in their country, including the rise of Islam, since they clashed with too many political concepts – or fantasies – they had been brainwashed into accepting: the superiority of the "French social model;" the unique assimilative capacity of French society; equality for equality's sake; the primacy of individual values over family values; secularism; francophonie, or the assumption that all French-speaking nations in the world were a mere extension of France, and that all nations that defined themselves as "Francophone" did speak French or were subdued by French culture; and finally la politique arabe et islamique de la France, a supposed political and strategic affinity with the Arab and Muslim world.

Until 2004, compilation of ethnic, racial, and religious statistics was prohibited under French law.

One way for the elites to deny demographics was to reject ethnic-related investigation on legal or ethical grounds. Until 2004, ethnic, racial, and religious statistics were not allowed under French law – ostensibly to prevent a return of Vichy State-style racial persecutions. Even as the law was somehow relaxed, first in 2004 and again in 2007, many statisticians or demographers insisted on retaining a de facto ban on such investigations.

The issue turned into a nasty civil war among demographers, and especially within INED (the French National Institute for Demographic Studies) between a "classic" wing led by older demographers like Henri Léridon and Gérard Calot and then by the younger Michèle Tribalat, and a liberal or radical wing led by Hervé Le Bras.

Michèle Tribalat
In a recent interview with the French weekly Le Point, Tribalat dryly observed that the "well-connected" Le Bras described her as "the National Front Darling," an assertion that "destroyed her professional reputation." The son of a prestigious Catholic historian, Le Bras is indeed a very powerful man in his own right, who managed throughout his own career to accumulate tenures, honors, and positions of influence both in France and abroad.

The irony about his accusation against Tribalat is that, while intent to discuss the issue of immigration, she is an extremely cautious and conservative expert when it comes to actual figures. She has always tended to play down, in particular, the size of the French Muslim community.

In 1997, I observed in an essay for Middle East Quarterly that figures about French Islam were simply chaotic: there was too much discrepancy between sources:

The Ministry of Interior and Ined routinely speak of a Muslim population in France of 3 million. Sheikh Abbas, head of the Great Mosque in Paris, in 1987 spoke of twice as many – 6 million. Journalists usually adopt an estimate somewhere in the middle: for example, Philippe Bernard of Le Monde uses the figure of 3 to 4 million. The Catholic Church, a reliable source of information on religious trends in France, also estimates 4 million. Arabies, a French-Arab journal published in Paris, provides the following breakdown: 3.1 million Muslims of North African origin, 400,000 from the Middle East, 300,000 from Africa, 50,000 Asians, 50,000 converts of ethnic French origin, and 300,000 illegal immigrants from unknown countries. This brings the total to 4.2 million. One can state with reasonable certainty that the Muslim population of France numbers over 3 million (about 5 percent of the total French population) and quite probably over 4 million (6.6 percent).
Nineteen years later, accuracy has hardly improved in this respect. All sources agree that France as a whole underwent a moderate demographic growth: from 57 to 67 million, a 15% increase. (Throughout the same period of time, the U.S. enjoyed a 22% population increase, and China, under a government-enforced one-child policy, a 27% increase.) All sources agree also that there was a much sharper increase in French Muslim demographics – and that, accordingly, the moderate national growth may in fact just reflect the Muslim growth.

Over two decades, the French Muslim population is thus supposed to have increased by 25% according to the lowest estimations, by 50% according to median estimations, or even by 100% if one compares the INED and government figures of 1997 to those of 2014, from 3 million to almost 6 million.

An impressive leap forward, whatever the estimation. But even more impressive is, just as was the case in 1997, the discrepancy between the estimates. Clearly, one set of estimates, at least, must be entirely erroneous. And it stands to reason that the lowest estimates are the least reliable.

First, we have a long-term pattern according to which, even within the lowest estimates, the Muslim population increase is accelerating. One explanation is that the previous low estimates were inaccurate.

Second, low estimates tend to focus on the global French population on one hand and on the global French Muslim population on the other hand, and to bypass a generational factor. The younger the population cohorts, the higher the proportion of Muslims. This is reflected in colloquial French by the widespread metonymical substitution of the word "jeune" (youth) for "jeune issu de l'immigration" (immigrant youth), or "jeune issu de la diversité" (non-European or non-Caucasian youth).

According to the first ethnic-related surveys released in early 2010, fully a fifth of French citizens or residents under twenty-four were Muslims.

Proportions were even higher in some places: 50% of the youth were estimated to be Muslim in the département (county) of Seine-Saint-Denis in the northern suburbs of Paris, or in the Lille conurbation in Northern France. A more recent survey validates these numbers.

Once proven wrong, deniers do not make amends. They move straight from fantasy to surrender.

An investigation of the French youths' religious beliefs was conducted last spring by Ipsos. It surveyed nine thousand high school pupils in their teens on behalf of the French National Center for Scientific Research (CNRS) and Sciences Po Grenoble.

The data was released on February 4, 2016, by L'Obs, France's leading liberal newsmagazine. Here are its findings:

38.8% of French youths do not identify with a religion.
33.2% describe themselves as Christian.
25.5% call themselves Muslim.
1.6% identify as Jewish.
Only 40% of the young non-Muslim believers (and 22% of the Catholics) describe religion as "something important or very important."
But 83% of young Muslims agree with that statement.
Such figures should deal the death blow to demographic deniers. Except that once proven wrong, deniers do not make amends. Rather, they contend that since there is after all a demographic, ethnic, and religious revolution, it should be welcomed as a good and positive thing. Straight from fantasy to surrender.

Michel Gurfinkiel, a Shillman-Ginsburg Fellow at the Middle East Forum, is the founder and president of the Jean-Jacques Rousseau Institute, a conservative think tank in France.