Skip to main content Skip to search
Secondary menu
Home » Is political solution in Syria any closer after Astana talks?

Is political solution in Syria any closer after Astana talks? 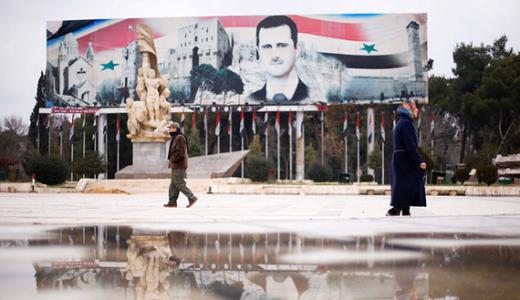 International peace talks have been taking place for several years now in an effort to come to a political solution for the ongoing war in Syria. Yet the recent Astana talks, much like the previous Geneva talks, have demonstrated that they have little impact on the ground, as both the Syrian government and regional actors continue to push their own agendas.

Rather, it continued to pursue its policy of local reconciliations — truces and agreements conducted with local opposition factions in opposition-held towns and areas in Syria, an initiative it has been following since 2014 that does not fall within the realms of any of the peace talks — and just prior to the talks, it launched its own offensive toward al-Bab, putting its ally Russia in a difficult position with Turkey.

As far as the government is concerned, the only tolerable end to the Syrian war is to regain all of Syria without much compromise — whether with the opposition or with its external enemies. This is indeed the solution that the regime is attempting to achieve through its own actions on the ground — either through local truces, whose terms the government dictates, or the recent string of military successes that have enabled it to recapture previously lost territory. And in this endeavor to regain all of Syria, Damascus is keen not to lose to either its opponents and its allies.

This is further evidenced by what appears to be a government plan to launch an offensive toward west Aleppo, treating it in the same way as the regime treated the area of Wadi Barada, which the government does not consider part of the nationwide cease-fire brokered by Russia and Turkey. The government claims al-Qaeda-affiliated Jabhat Fatah al-Sham (previously Jabhat al-Nusra) is present in these areas.

With regard to the talks themselves, the government’s delegation, as noted by a government insider, further proved how little interest it actually had in the talks and its outcome.

“The government delegation to Astana was the usual Geneva delegation, plus a retired army officer, Maj. Gen. Salim Harba, and another low-ranking officer,” the insider told Al-Monitor on condition of anonymity, adding that no one of high significance attended. “This is proof of the government’s disregard of the talks,” the government source said.

Also, opposition sources both inside and outside Syria have voiced frustrations over the lack of impact that international conferences and the unofficial Track II initiatives promoted by foreign governments and think tanks have had on bringing the war in Syria to a political solution.

One opposition source requesting anonymity due to the sensitivity of the matter told Al-Monitor, “These talks and initiatives are largely useless. It Is clear that some initiatives are just interested in promoting their own goals for Syria rather than what is best for the Syrians, and focus on impractical solutions around transition and transfer of authority.”

He added, “Each player, each country is working for his own interest only.”

Moreover, the opposition is so fractured — between those who have military might on the ground and those who play politics in hotels in Turkey, London, Paris and Washington — and ideologically separated — again between those who are pushing for the implementation of a Sharia state and those who are willing to work on a more secular notion of state — that such talks have largely been ineffective in implementing anything sustainable. This is further complicated by the fluid alliances between opposition groups and terrorist organizations such as Jabhat Fatah al-Sham, making any talks, in particular regarding the implementation of cease-fires, especially difficult, and something the government does not hesitate to capitalize on.

The actions of various opposition groups on the ground have signaled to Damascus that adhering to the cease-fire is also not a priority for the groups. According to one source in Damascus, recent attacks on government checkpoints by the opposition in Harasta, for instance, is evidence that the opposition will, within its limited capacity, still act according to its own agenda.

“They attack the checkpoints, and when there is retaliation from the army on those attacks, they cry that the government has broken the cease-fire,” he said.

However, the Astana talks did serve a purpose for some; the regional players used the opportunity to re-establish their respective roles in the Syrian war.

According to Syrian political and military analyst Mohammed Saleh al-Ftayeh, the purpose of such talks is precisely to gather all the influential regional and international powers, as well as the Syrian government, in one place.

“Even though no one acknowledges this, these meetings in essence aim at convincing external players to pursue their politics in means other than continuing the war,” he explained. “The road to these meetings and the meetings themselves are an opportunity for influential players to negotiate their own demands.”

And today the balance of power has shifted between the regional players. The United States did not have a role at all in these talks (apart from the presence of its ambassador as an observer only), while Turkey played a very significant role, largely as a result of its cooperation with Russia over the recent Aleppo deal.

In fact, according to multiple sources present in Astana, the talks were successful in that the major players used the opportunity to redefine their roles. Russia came across as a more neutral partner, and is now seen as willing to compromise to achieve a political solution. The Russian presentation of the draft constitutional amendments, plus the follow-up meeting in Moscow, left the opposition with the impression that Russia is the most reasonable actor in the government’s axis. Meanwhile, the role of Turkey and Iran in the war were recognized and taken more seriously by both the Syrian government and the opposition. The fact that Iran was included as one of the guarantors of the cease-fire forces the opposition to recognize it as a legitimate party, while also forcing on Iran the responsibility to rein in its allies and maintain the cease-fire.

Ftayeh told Al-Monitor, “The role of Turkey as one of the most important players in Syria has been acknowledged by Russia, but not by all other players who may feel threatened by this Russian-Turkish rapprochement, and by the notion of a political solution in general. Eastern Aleppo would not have fallen without Turkey’s cooperation with Russia, especially when it pressured armed opposition factions to negotiate surrendering the city.”

He added, “Turkey gained much from this cooperation; its national security fears were taken into consideration and Russia is now supporting Turkey in its offensive to take al-Bab.”

If Turkey can capture al-Bab, with the help of Russian airstrikes, it can prevent the Democratic Union Party (the Syrian branch of the Kurdistan Workers Party) from connecting its three cantons and eventually create a Kurdish state along Turkey’s border.

The success — or lack thereof — of the Astana talks will become clear over the coming months, and in the meantime all players involved will continue working on their agendas to ensure they can obtain as much as possible before the next round of negotiations, when the cycle will start over again.