Is Erdogan a Russian Ally or Putin's Puppet? 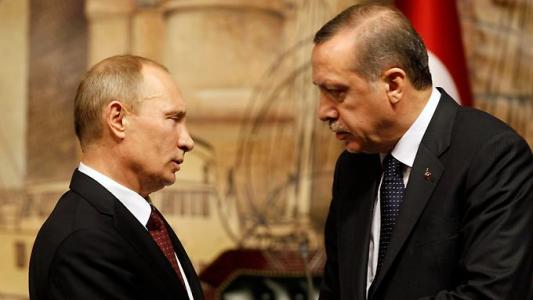 Anna Borshchevskaya
The Turkish-Russian relationship is an unequal one, and Erdogan may not realize the extent of Putin's capacity for manipulating and abandoning temporary allies.

Russian and Turkish strongmen Vladimir Putin and Recep Tayyip Erdogan appear closer than ever. For years Erdogan opposed Putin's position on Syria, and demanded that Syrian dictator Bashar al-Assad must go. No longer does Erdogan voice this demand. To the contrary, upon conclusion of the latest Syria talks in Astana on January 24, Putin and Erdogan only moved closer by agreeing, together with Iran, to jointly fight ISIS and al-Qaeda affiliate Jabhat Fatah al-Sham. Russian and Western press reports indicate Turkey and Russia already launched joint strikes in Syria.

Yet the Russian-Turkish relationship is unequal. Putin is in an increasingly stronger position, and it is unclear if Erdogan is aware of this.

Erdogan has eliminated virtually all free press. It is hard to top Russia on freedom of expression crackdown, but Turkey for years now has ranked below Russia on free press according to Reporters without Borders. Putin and Erdogan share many traits, but Turkish society is more sharply divided than Russia's, and the Kremlin's propaganda efforts are more organized and systematic. Indeed, Russian propaganda is second to none. Since the failed Turkish coup in July, Erdogan has unleashed an unprecedented crackdown on civil society and the military. In this context it is easier for Erdogan than for Putin to be out of touch with reality.

Meanwhile, Putin retains leverage over Erdogan, especially through his relationship with the Kurds. Broadly speaking, Kurdish nationalism has long been central to Erdogan, first as an object of reconciliation, and now one of confrontation, specifically with the Kurdistan Workers Party (PKK). Moscow's deep ties to the Kurds go back two centuries. Russian and Soviet leaders always used them against Turkish leaders to assert control. The PKK is essentially a Kremlin-sponsored Cold War era creation. It is partly because of fears of Kurdish nationalism in Syria that Erdogan has come to believe he has no choice than to accept Putin's position on Assad, especially in the context of years of US absence in Syria.

Putin has serious problems -- both real and imaginary, but Erdogan has little leverage over him. By comparison, the Turkish economy appears to be doing even worse than Russia's. Putin can also turn on and off the flow of Russian tourists into Turkey. Turkey has grown more dependent on Russian tourists who, by comparison, have greater options.

Turkey is also more vulnerable to terrorist attacks. Erdogan is more isolated and stretched thinner on multiple fronts. Putin is also simply less emotional than Erdogan, and more calculating. As one Turkish analyst said in January, "The Turkish government has completely detached itself from reality." This is not necessarily so with Putin.

Putin views diplomacy in zero-sum terms, and in the end, holds allegiance to no one. He has thrown other leaders under the bus before and can turn on a dime, be it freezing the sale of S-300s to Iran in 2010 when it suited the Kremlin's interests, or lifting the ban in 2015 despite Israel's security concerns. Putin tends to view international affairs as a system of strong-arming others into submission, making offers one can't refuse, or simply fomenting unrest or confusion through subterfuge.

At the same time, in the Middle East Putin has been closer to the anti-Western Shia bloc, and will likely remain closer to it in the near future. Turkey, a Sunni power, on the other hand, is still a NATO ally. When Erdogan apologized in June 2016 to Putin for Turkey's downing of the Russian jet that briefly entered Turkish territory in November 2015, he implicitly admitted that Turkey needs Russia more than Russia needs Turkey. Erdogan may think Putin is his ally, but instead, Turkey is falling far deeper under Moscow's influence than even Erdogan may realize.

Anna Borshchevskaya is the Ira Weiner Fellow at The Washington Institute.