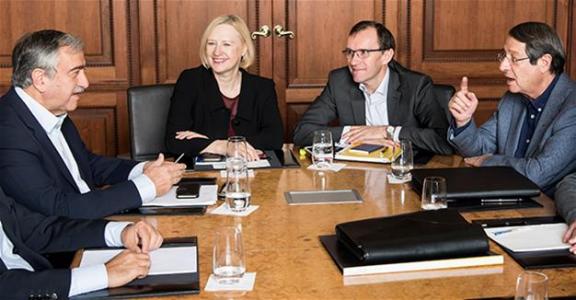 BYMICHAEL TANCHUM
The greatest beneficiary of a failure in Geneva would be Russia and its efforts to further expand its widening strategic footprint in the Eastern Mediterranean.
Israel hopes to market its natural gas to Turkey, and via Turkey to the EU, but this aim may hang on the outcome of the potentially historic Cypriot peace negotiations currently underway in Geneva.

Since an undersea gas pipeline from Israel’s Leviathan natural gas field to Turkey requires crossing Cyprus’s economic exclusion zone, failure to reach an agreement could force Israel to return to an older plan of marketing its natural gas via Egypt. However, in the new energy and geopolitical realities of the region that emerged in 2016, Israel’s selection of Egypt as its major export option could result in the Russia’s rise as a central player in Eastern Mediterranean energy.

The divided island of Cyprus has a “once in a generation” opportunity to resolve the conflict and unite the island. Greek Cypriot President Nicos Anastasiades and his Turkish counterpart Mustafa Akinci have worked assiduously toward an enduring solution, narrowing the gap between the two sides on the most vexing issues blocking reunification. The current talks between the parties in Geneva will turn into an international conference on January 12 to include the three guarantor powers – Turkey, Greece, and the United Kingdom – for the first time since 1960.

However, while Greek and Turkish Cypriot positions are closer than ever before, there has emerged a widening gap between their guarantors in Athens and Ankara. The attempt to arrive at a settlement at this singularly exceptional moment could falter on Greece and Turkey’s failure to agree on the issue of guarantees.

The greatest beneficiary of a failure in Geneva would be Russia and its efforts to further expand its widening strategic footprint in the Eastern Mediterranean.

With international attention during 2016 focused on Russia’s pivotal role in the Syrian peace process, many have missed Russia’s strategic advance farther south in the eastern Mediterranean. Moscow’s late 2016 gains have come via two major energy deals concluded with Cairo, agreements that deepen Russo-Egyptian ties in a manner that affects the strategic interests of both Israel and Turkey.

On December 12, 2016, the Italian energy giant Eni agreed to sell a 30% stake in the Zohr natural gas field off Egypt’s coast to Russia’s Rosneft for US$1.575 billion.

The largest gas find in the Eastern Mediterranean, Egypt’s Zohr field contains 850 billion cubic centimeters of natural gas, 36% more than Israel’s Leviathan field. Rosneft will become the second largest stakeholder in Zohr, which is expected to start producing gas by late 2017. Moscow also maintains an option to buy an additional 5% share in the field.

While most of the gas produced at Zohr is slated for Egypt’s domestic market, natural gas from Zohr or neighboring suppliers such as Israel and Cyprus can now supply Egypt’s dormant liquefied natural gas (LNG) plants, potentially rendering Egypt again into a net natural gas exporter. If Egypt became an LNG supplier to Europe, it could undercut the importance of Turkey’s Trans-Anatolian Pipeline (TANAP), which, as the main pipeline of the Southern Gas Corridor extending from Azerbaijan to Greece, Albania, and Italy, is designated to transport natural gas from the Caspian Sea to the EU.

While the EU regards the Southern Gas Corridor as a transit corridor to reduce its critical dependency on Russia for its natural gas imports, Ankara’s ambition is also to use TANAP to become an energy hub for the distribution of natural gas from the Caspian Basin and Middle East to Europe. To thwart these developments, Russia has sought a role in developing and marketing Eastern Mediterranean gas, including repeated Russian overtures to Israel to partner in the development of Israel’s gas industry.

Moscow’s breakthrough in the region came via Cairo and not Jerusalem. After the December 12 agreement for Rosneft’s purchase of a 30% share in the Zohr field, Egyptian President Abdel Fatah al-Sisi’s office highlighted the new level of Russo-Egyptian cooperation stating: “The president reaffirmed Egypt’s commitment to cooperate with Russian companies in all spheres, including [the] oil and gas sector[s], taking into account the immense experience and potential of Russian companies.”

The gas deal came on the heels of the November 19, 2016 agreement between Cairo and Moscow for Russia’s state-owned nuclear energy company Rosatom to build Egypt’s first nuclear power plant in Dabaa on Egypt’s Mediterranean coast. Scheduled for completion in 2022, the additional electricity produced by the Dabaa plant could reduce Egypt’s need to generate electricity from natural gas for its own domestic market thereby making more gas available for LNG exports to Europe.

Although Turkey constitutes Israel’s most commercially viable natural gas market, a failure in Geneva would lead Israel and the Republic of Cyprus government in south Cyprus, which controls the Aphrodite offshore gas field, to look for alternative ways to export natural gas to Europe. Both countries desperately need to secure a stable export market in order to finance the development of their gas industries. In this circumstance, Russia would have a strong strategic interest to incentivize Israel and the government in south Cyprus to export gas via Egypt in order to gain greater influence over non-Russian supply sources and routes to the EU natural gas market.

The future pattern of energy relations in the Eastern Mediterranean awaits the outcome in Geneva.

Dr. Micha’el Tanchum is a fellow in the Middle East and Asia Units at the Truman Research Institute for the Advancement of Peace at the Hebrew University of Jerusalem.