Skip to main content Skip to search
Secondary menu
Home » How many Kurdistans? 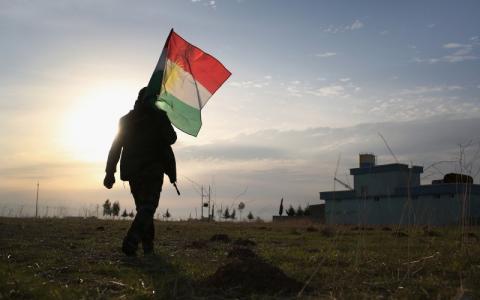 Verda Ozer
Will an independent Kurdistan be built in northern Iraq? This question has long hung over our heads. However, in his op-ed for the Washington Post on Feb. 22, Bilal Wahab suggested that this is the wrong question. “How many Kurdistans will be formed? This is the right question to be asked from now on,” he wrote.

“For nearly a century now, the question of whether there should be an independent Kurdish state has loomed over the Middle East. The issue achieved new urgency after U.S. forces invaded Iraq in 1991, creating the preconditions for Kurdish autonomy. The American-led invasion in 2003 has merely accelerated that process. Today with the collapse of Syria and continuing tumult in Iraq, the question is now: How many Kurdistans will emerge from the regional crack-up?” Wahab wrote.

Apparently this question is increasingly being asked, especially in the U.S. Richard Haass, the head of the Council on Foreign Relations, told me in an interview two years ago that Washington supported the idea of a “mini Kurdistan” composed of Kurds in Iraq and Syria. He kept Turkey’s Kurds outside of this structure.

It is well known that Iraqi Kurdistan Regional Government (KRG) President Masoud Barzani, and the PKK-affiliated PYD/YPG in northern Syria often cross swords. The PYD has always kept Barzani-affiliated groups out of northern Syria. Their main disagreement is over who controls the region covering western Iraq and northern Syria.

The Obama administration tried hard to reconcile the Iraqi and Syrian Kurds. These efforts sometimes bore fruit, such as last July when Barzani temporarily reopened the Semalka border crossing, which is the main gate for Syrian Kurds to the KRG.

The two entities cooperated specifically when the threat of the Islamic State of Iraq and the Levant (ISIL) peaked. Right after ISIL captured Mosul in July 2014, the PYD offered help to Barzani. Likewise, the Peshmerga forces under Barzani crossed over to northern Syria to reinforce their Kurdish brethren in the siege of Kobane in December 2014.

However, ahead of ISIL’s impending fall, this “de facto” reconciliation has collapsed. The two entities are now once again engaged in bitter competition, to the extent that Barzani has started to attack PKK camps in the Sinjar area of northern Iraq, which has become the PKK’s second main base in the country. In addition, two days ago PKK-affiliated groups attacked oil pipelines in Kirkuk that are under Barzani’s control.

This is exactly why Bilal Wahab argued that the Kurds of these two countries cannot unite and the foundation of two independent Kurdistans is more probable.

What’s more, in addition to the dynamics within the broader Kurdish area, these two separate Kurdish people are becoming increasingly consolidated within their own countries.

Turkey’s ongoing Euphrates Shield operation has prevented the formation of a PYD-corridor in northern Syria. Yet post-ISIL dynamics have also crystallized. The region under the PYD/YPG in northern Syria is backed by both the U.S. and Russia. Moreover, even Syrian President Bashar al-Assad, who has long opposed any Kurdish autonomy in his country, seems to have accepted this new reality. According to recent reports, al-Assad’s forces have created a buffer zone between the PYD and Turkey-backed opposition groups in Manbij.

The U.S. army seems to be continuing to rely on YPG forces as its main fighting force in Syria. Moscow is also fully using its Kurdish card; the more Ankara intensifies its talks with Washington, the more Russia’s Kurdish policy becomes visible. The organization of the “Regional Kurdish Conference” in Moscow on Feb. 15 is only one of the latest examples.

On the other hand, a referendum on Iraqi Kurdistan’s independence is only a matter of time.

After all, who knows whether a “mini Kurdistan” or two separate Kurdistans will be formed? Turkey’s main concern is its own unity and the formation of a “friendly” Kurdish line across its borders. This is also the only way to take the “Kurdish card” out of the hands of the great powers.

To achieve this end, Ankara needs to urgently shift from a short-term to a long-term Kurdish strategy. In other words, in needs to change its paradigm. It therefore has to go beyond the frame put forward by the PYD and backed by the U.S. and Russia, integrating Barzani into the equation in northern Syria and thereby ensuring pluralism in this area.

Secondly, Ankara needs to cleanse the Kurdish entity in northern Syria from the PKK. Just as Barzani placed a distance between the KRG and the PKK, and has even started to target the terrorist organization, the PYD should be pushed toward the same end. If it defines itself as a political actor and refrains from violence, it could become a contact point again.

This policy would also strengthen Turkey’s hand in its fight against the PKK, while preventing the foundation of an independent Kurdistan from being a threat.
http://www.hurriyetdailynews.com/how-many-kurdistans.aspx?pageID=449&nID=110428&NewsCatID=466