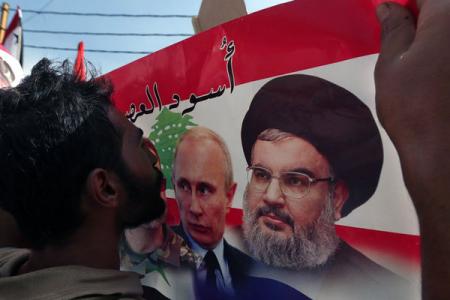 Those events are spearheaded by the pro-Iranian Hizballlah’s drive to capture the Golan in line with its war of “resistance” on the Jewish state. This fixation came into sharp focus the day after the air strike in a rare admission by Hizballah of the loss of a commander. He was named Badee Hamiyeh and was described as having been killed “in the southern Syrian region of Quneitra near the Israeli-held Golan Heights.” This was the first anyone had heard of any recent battle on the Golan.
A week earlier, Prime Minister Binyamin Netanyahu and IDF Intelligence Director Maj. Gen. Hertzl Halevi showed President Vladimir Putin in the Kremlin maps depicting the various military movements ongoing in Syria, with the accent on an armored convoy of several hundred Hizballah troops driving out of their Syrian stronghold of Zabadani towards Mt. Hermon. The convoy was clearing a path by overrunning some 30 Syrian rebel villages on the Hermon slopes, which command the Syrian Golan town of Quneitra and the Israeli border.
This evidence demonstrated that Hizballah had developed a single military stratagem for threatening Israel-held Hermon, ruling central Golan and gearing up for battle to restore the entire Golan area to Syrian sovereignty under Hizballah control.
Netanyahu had hoped that Putin would agree to stop the Hizballah convoy and keep his promise not to let Iran and Hizballah deploy on the Israeli border. However, the Russian leader was unresponsive. Not only were Russian commanders in Syria not instructed to restrain Hizballah, they acted to persuade Syrian rebels on the Hermon and the Golan to surrender to he Lebanese Shiite invaders.
And indeed, as the Hizballah advance continued. Its leader Hassan Nasrallah contrived an equation to justify his assault on the Golan. “They brought ISIS to the Beqaa [Hizballah’s Lebanese stronghold] and so the ‘resistance' [Hizballah] went to Syria. They wanted this group to reach Beirut, and so, today, we are in Golan.”
Seeing Hizballah on the move unchecked and gearing up for an expeced showdown with Israel, Netanyahu and the IDF decided to take matters in their own hands. They ordered several air force strikes Friday on the relatively remote strategic T4 air base near Palmyra in northeastern Syria and hit several birds with one stone.
DEBKAfile’s military sources describe T4 as the main terminal for Iranian planes to land day by day and unload war materials for their own forces as well as the Syrian army and Hizballah.This air base also houses Russian attack helicopters and special operations troops, whose presence there was trusted by Tehran and Nasrallah to be an effective shield against Israeli attack.
The IAF air strike Friday proved them wrong.
These developments were the subtext of the video statement by Netanyahu that was broadcast Friday night by Israeli media: “I can assure you that our resolve is firm, as attested to by our actions,” he said. “This is something that everyone should take into account, everyone!.” When he said, “everyone,” he was not just addressing Tehran and Beirut, but Moscow as well.
Israel is not planning action against Russian forces in Syria, but if the Russian army, whether deliberately or unintentionally, grants Iran and Hizballaha military protection, as they counted on having at T4, Israel would not hesitate to disabuse them.
The Kremlin got the message and, a few hours after the Israeli air strikes, Israeli Ambassador Cary Koren was summoned to the Russian Foreign Ministry. There was no official protest, but Deputy Foreign Minister Mikhail Bogdanov firmly informed the ambassador that Moscow would not tolerate any further Israeli attacks on Syrian bases where Russian forces were present.
In the course of the raid, Israel’s advanced anti-missile Arrow system made its first operational appearance. IDF chiefs feared that the Syrian anti-air missiles fired against the Israeli jets might fall on a populated location inside Israel and so decided it was necessary to intercept any incoming projectiles.
Israel’s military experts got into an argument, which will no doubt go on for years, over whether Arrow’s first appearance in this situation was a good or a bad move. However, the deafening bang that the IDF wonder weapon inflicted on millions of Israeli ears, within a radius of more than a 150 kilometers from the Jordan Valley to the Mediterranean, offered an inkling of how much worse it will be in a full-scale conflict.
http://debka.com/article/25972/Hizballah%E2%80%99s-trust-in-Russia-%E2%80%93-strategic-dilemma-for-Israel