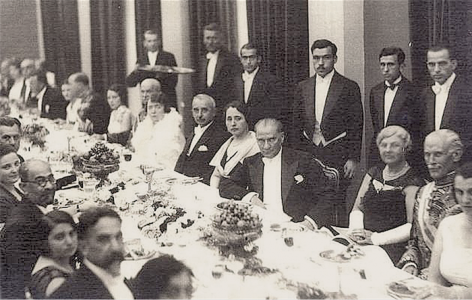 Murat Yektin
A debate has been triggered after Education Minister Ismet Yılmaz’s Jan. 13 announcement that a new curriculum would be open to “public suggestions” until Feb. 20.

Still, there wasn’t much debate on the exclusion of Charles Darwin’s theory of evolution from biology books, as it was something already expected. A few years ago, also under the current ruling Justice and Development Party (AK Parti) government, the Scientific and Technological Research Council of Turkey (TÜBİTAK) had suspended the editor of its monthly magazine over its cover featuring Darwin and evolution theory, after which the issue was never mentioned again. Since then, the conservative-nationalist school teachers’ union Eğitim-Bir-Sen has proposed the exclusion from school textbooks of even mention of evolutionary theory.

Debate now rages over another proposal from the same union, which demands the exclusion from the curriculum of the political principles of Mustafa Kemal Atatürk, the leader of the War of Independence and the founder of the Turkish Republic following the fall of the Ottoman dynasty.

The ministry does not want to erase the name of Atatük or his principles, which are actually the founding principles of the Republic. But it has decided to “reduce” them, affording them lesser space in the national curriculum. Meanwhile, the ministry recommends the removal from history books of the name of Atatürk’s successor, İsmet İnönü.

İnönü is particularly important in terms of the Second World War, which he managed as president to keep Turkey out of until its final months. That still marks perhaps the biggest diplomatic success in the history of the 93-year-old republic.

The young Turkish republic was at the time still struggling to recover from the ruins of three successive wars - the Balkans War, the First World War and the War of Independence - in deprivation of a proper army, human resources and money. As in the 1923 Lausanne Agreement, in which the Kemalist government in Ankara was recognized as the new Turkey, the architect of Turkey’s WWII policy was İnönü.

There is a much-quoted dialogue between İnönü and a young girl that took place during WWII – hard years when bread was still rationed.

“You left us without bread, Pasha,” the little girl complained. “That’s right,” he replied, “but at least I did not leave you without a father.”

Islamists and a great many right-wing conservatives in Turkey despise both Atatürk and İnönü for putting an end to the Ottoman caliphate and bringing a secular order to the Turkish Republic, separating religious affairs from the state. It is true that some of their implementations during one-party rule were far from democratic by today’s standards. But the world of the 1920s and 30s was the world of Hitler, Mussolini, Stalin, Chamberlain and Roosevelt.

After the end of WWII, it was Turkey’s second president İnönü who decided to end the one-party rule and shift the regime to a multi-party democracy. He was then handed a historic defeat in the 1950 election.

In fact, until a few years ago attacking Atatürk was rather fashionable. But despite this, the government and conservative circles have observed that the attraction of Turkey’s founder has not been lessened among the people. Every year, increasing numbers of visitors flock to Atatürk’s mausoleum in Ankara on the anniversary of his death on Nov. 10, 1938 and on Oct. 29, Republic Day. They do so not under any pressure from the establishment, as in the past; they do so voluntarily, aware of the risk that his legacy could one day be stamped out.

Perhaps acknowledging that trying to erase Atatürk from many people’s hearts is futile, a kind of demonization of İnönü has started among many conservatives, as if İnönü alone is the root source of everything bad in Turkey. If you do not dare to attack certain institutions of the Republic - whether it be gender equality or secularism - you attack İnönü instead, as attacking Atatürk has proven to be counterproductive.

It is hard to fathom what kind of benefit reducing mentions of Atatürk and deleting İnönü from school textbooks will bring to Turkey’s already devastated education system. What’s more, if you start erasing the names of the first and second president, one day people might start thinking about erasing the names of later presidents as well.

The Education Ministry should reconsider this curriculum change and instead try to focus on a more positive agenda for students in Turkey to receive a better education.