Good news and bad news from Trump to Erdoğan 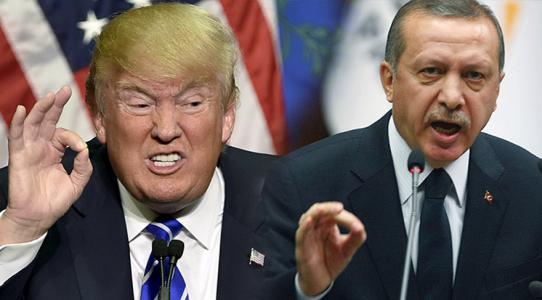 In his visits to Tanzania, Mozambique and Madagascar, he had two topics on the agenda:
1- Asking the leaders of those countries to clean their government system of the influence of Fethullah Gülen, the Turkish Islamist preacher living in the United States, and
2- Offering leaders more economic cooperation with Turkey, especially in the field of infrastructure.
It is an irony that the Gülen network with their schools, charity and trade organizations was able to settle in not only those countries but in many other countries in Africa and around the world with the help of the same Justice and Development Party (AK Parti) government when Erdoğan-led governments and the Gülen network were in a symbiotic relationship from 2002 to 2013. The relations broke down after the launch of a major graft probe in December 2013 in which Erdoğan’s ministers, officials and even family members were alleged to be involved; Erdoğan immediately denounced it as a coup attempt against him by the Gülenists.
It was shortly before the July 15, 2016, coup attempt that the Gülenist network was declared as a terrorist group, the “Fethullahist Terror Organization” as the indictments suggest. The secret network of Gülen within the Turkish system, mainly the military, judiciary, police and education, was accused of being behind the military coup attempt not only by the government but also by the opposition parties.
Turkey has been seeking the extradition of Gülen from the U.S., alleging that he continues to interfere in Turkish affairs from the Pennsylvania farmhouse in which he lives in, plus he is a “leader of a terror ring” under arrest warrant, so Turkey’s NATO ally, the U.S., has to extradite him, or at least take under temporary arrest as a 1981 deal between the two suggests.
The government had little hopes from the Barack Obama administration that it could get a positive response on Gülen; Gülenists had poured in donations and established close relations with the Democratic administration over the years anyway. They have nearly 250 schools in the U.S., even universities; North American University in Texas, for example, recently appointed a well-known Gülenist, Ali Şerif Tekalan, as its rector. Tekalan is a former rector at Turkey’s Fatih University but is currently the subject of an arrest warrant.
But both Erdoğan and the AK Parti government are entertaining hopes that the U.S. administration might take some steps on the Gülen case.
The good news for Erdoğan is that the Trump administration might indeed take some steps to curb the Gülen network, at least its operations from the U.S. But it may not be in the form Turkey wants; he might take legal action against the Gülen network like other Islamist networks operating in and from the U.S.
And then comes the possible bad news. Trump and his camp might take legal action against Gülen not because the Gülen network attempted a bloody coup in a NATO ally country, but because he is running an Islamist network and because many heavyweights in Trump’s team are openly anti-Muslims, beyond being Islamophobes.
National Security Adviser Michael Flynn thinks Islamophobia is rational. CIA Director Michael Pompeo thinks the Iranian government is “about as democratic as that of Erdoğan — both are totalitarian Islamist dictatorships.” Frank Gaffrey, who was a key person in Trump’s transition team, is the one who has been labeling Obama as a “stealth Muslim,” as if it was a crime; he is not against “radical Islam” – he is considered anti-Islam in American politics.
Rex Tillerson, the new secretary of state, is not known for his Islamophobic or anti-Islam sentiments. But in testimony before a Congressional panel, he clearly said that after the Islamic State of Iraq and Levant (ISIL) in Syria, the next targets would be al-Qeada, the pro-Iran Hezbollah and the Muslim Brotherhood.
Erdoğan and the AK Parti government would have no objection in fighting against al-Qaeda and affiliates, as Turkey has been fighting against them in Afghanistan, Syria and in Turkey; it’s on the terrorist organization list of the government. There might be mixed feelings against Hezbollah; groups in their milieu have committed crimes in Turkey before, but Hezbollah means Iran on the other hand. But it would not be easy for the AK Parti government to put the Muslim Brotherhood on its black list, as Turkey has been accused by a number of Arab countries of protecting the brotherhood leadership.
But if politics is also an art of give and take, we will see how it will work between Trump and Erdoğan as well.
http://www.hurriyetdailynews.com/good-news-and-bad-news-from-trump-to-erdogan.aspx?pageID=449&nID=108989&NewsCatID=409