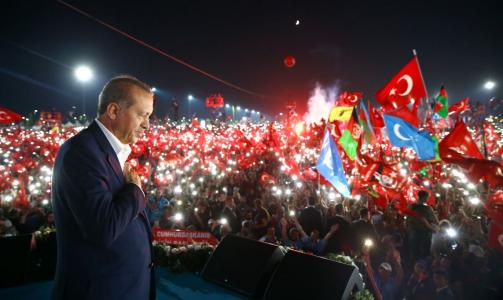 FINIAN CUNNINGHAM
The extraordinary war of words erupting between Turkey and the European Union is pushing already strained relations to breaking point. Ankara has banned all Dutch diplomats from its territory after the Netherlands banished Turkish ministers from holding political rallies, while deploying heavy-handed policing to break up the rallies.

Now with the rest of the EU expressing solidarity with the Netherlands and Ankara threatening more sanctions, or even walking away from a controversial refugee-holding deal with the bloc, the political schism seems set to become an irreparable chasm. For sure, the long-delayed talks over Turkey’s accession to the EU bloc can be said to be finished. Forever.

The Turkish government has dismissed calls by EU foreign policy chief Federica Morgherini for restraint in the escalating row, saying that such appeals were «worthless». Turkish President Recep Tayyip Erdogan double-downed on his invective attacks by labelling German Chancellor Angela Merkel a «supporter of terrorism».

Earlier, Erdogan and several of his government ministers had slammed the Netherlands and Germany as «Nazi remnants» and «fascists». Both Dutch prime minister and Germany’s Merkel responded angrily, denouncing Ankara’s inflammatory rhetoric and demanding an apology.

Erdogan then went even further with inflammatory rhetoric. He accused Dutch UN peacekeepers of complicity in the Srebrenica massacre in 1995, when some 8,000 Bosnian muslim men were killed by Serb forces.

In truth, it is hard to feel sympathy for either side in this spat. It’s a case of plague on both houses.

For Erdogan and his ruling Justice and Development Party (AKP) to castigate EU members as a «Banana Republic» and «fascist» is beyond irony.

Since the failed coup in Turkey last July, the Ankara government has embarked on a wave of repression, sacking over 100,000 civil servants, judges, academics and journalists. Up to 15o media outlets have been shuttered and some 90,000 suspected coup supporters detained in Turkish prisons.

Erdogan is fast turning Turkey into a one-party state ruled with an iron fist. In a referendum to be held next month, on April 16, his ruling party is pushing for a constitutional change to give greater powers to the presidency. It is part of a drift towards Erdogan assuming dictatorial powers.

So for the staunch Islamist and autocratic Erdogan to label the EU as «fascist» is like the pot calling the kettle black.

But, as usual, the Turkish leader thrives on polarization. His brandishing of the nationalist and Islamist card in the bust-up with the EU is designed to drum up support at home for the referendum to grant him more centralized powers. Polls indicate that up to recently, most Turks were opposed to granting any constitutional change. But by whipping up public anger against the EU over its seemingly anti-Turkey, anti-Islamic stance, Erdogan is mobilizing chauvinistic support in the referendum for his cause.

Turks who are not backing his desired constitutional amendments can be maligned as unpatriotic or on the «side of terrorists». Erdogan claims that the new powers will give him a freer hand to wage war against Islamic State terrorists in Syria, as well as Kurdish separatists belonging to the outlawed Kurdish Workers Party (PKK) and their Syrian affiliates (YPG).

This kind of reasoning lies behind the political rallies that the Turkish government has tried to organize across Europe. There are some 5.5 million Turkish expatriates living in Europe, with major population clusters in Germany, Netherlands, Belgium, Austria and Switzerland. In Germany alone, there are 1.4 million Turkish nationals who are eligible to vote in the forthcoming referendum in Turkey. This significant constituency could be decisive in swinging the referendum vote in Erdogan’s favor.

However, European governments have lately moved to ban political rallies on their streets addressed by Turkish politicians in support of Erdogan’s cause.

In the latest flare-up, the Netherlands banned Turkish foreign minister Mevlut Cavusolgu from entering the country to speak at a rally in Rotterdam last the weekend. His stand-in replacement, Turkish social affairs minister Fatma Betül Sayan Kaya, who was already in the country, was then forcibly deported by Dutch police back to Germany from whence she came.

The ensuing clashes between Dutch police using water cannons, horse-mounted officers and dogs, against Turkish protesters, were fodder for Erdogan and his supporters back in Turkey to accuse Europe of using Nazi practices. «Those who attack my people with dogs will pay the price,» declared Erdogan.

Angry crowds jostled outside the Dutch embassy and consulate in Ankara and Istanbul, with their flags reportedly ripped down.

On this score, it is hard to disagree with the EU ban on the Turkish political rallies. Such foreign political intrusion is an unimaginable infringement on national sovereignty that would not be tolerated by Turkey nor most other countries.

This is partly why one surmises that Erdogan has deliberately contrived a confrontation on the issue. Knowing that such a provocative move on his part would be met with antagonism from European authorities, which in turn can be portrayed by Erdogan in a patriotic and religious cause.

Nonetheless, on both sides it is a carnival of reactionary politics with deep-seated complicity.

On the Turkish side, Erdogan wants to accrue more authoritarian powers at home partly because of the military quagmire he has created from regime-change intrigues against Syria. Erdogan’s subterfuge in Syria to oust the government of President Bashar al Assad has involved covert sponsorship of Islamist terror groups, against whom he now says he needs extra powers for his presidency to combat against. Well, if Erdogan hadn’t fomented the monster of terrorism haunting his country in the first place, then he wouldn’t be in a position of requiring greater presidential powers.

Also, let’s not forget that Turkish military forces have been fighting on Syrian territory since last August. This is a blatant violation of international law and an aggression against Syrian sovereignty. Again, the charge made by Erdogan denouncing European governments as «fascist» is richly absurd.

On the European side too it is fraught with reactionary contradictions pointing to its own grave complicity. The public apprehension over immigration and Islamism are major issues driving the rise of populist political parties who are mounting campaigns that are undermining the European Union.

This week in the Netherlands’ general election, the anti-Islamist, anti-immigration, anti-EU Freedom Party (PVV) of Geert Wilders did not win an outright victory over the incumbent center-right ruling party of Mark Rutte (VVD). Nonetheless, Wilders’ party did reportedly make a significant gain in parliamentary seats, increasing its quota by nearly a third.

The same dynamic is operating behind Britain’s historic Brexit departure from the EU and in the surge in support for Le Pen in France and similar parties in Germany, Austria, Italy, Denmark, Slovakia, Hungary and elsewhere.

This partly explains why European governments under pressure from the populist opposition are compelled to take an even tougher line on the Turkish political rallies. As in Holland, it is feared that the issue is garnering support for the populist parties.

But the bigger picture here is that the European governments and the EU bloc are complicit in stoking the immigration crisis from their support for illegal wars in Syria and across the Middle East. Britain and France in particular have been key players in abetting Washington’s agenda of illegal regime-change wars in Afghanistan, Iraq, Libya, Syria, Yemen and elsewhere.

The whole disastrous mess corroding the EU and its entanglement with a reckless Turkey is a plague on both their houses.