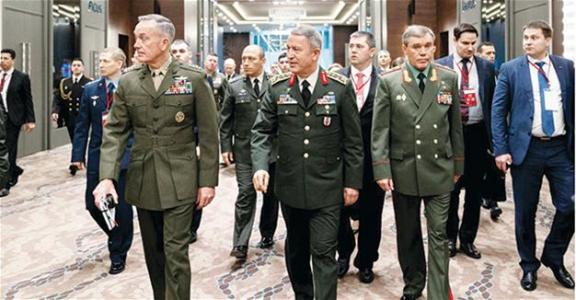 EXCLUSIVE: For the first time ever, the top soldiers of the United States, Russia and Turkey are holding a secret meeting in the Turkish town of Antalya for an urgent two-day effort to avert a clash between their three armies, which stand ominously face to face in northern Syria.
(See DEBKAfile’s exclusive disclosure on March 6)

Gen. Joseph Dunford, Chairman of the US Chiefs of Staff, Gen. Valery Gerasimov, Commander-in-Chief of the Russian armed forces, and Gen. Hulusi Akar, Chief of Staff of the Turkish army sat down together on Tuesday, March 7.
DEBKAfile’s military sources report that the formal agenda for this extraordinary get-together is the state of the Syrian war. But they are ranging over for more comprehensive and detailed issues and addressing at least six urgent challegnes:
1. How to prevent the three armies whose armored convoys are currently converging on the north Syrian town of Mabij, now freed of the Islamic State’s grip, from clashing over which takes over.
2. How to turn this approaching collision round and make it the jumping-off point for their collaboration in the Syrian conflict at large and a concerted drive against the Islamic State, in particular.
3. The three army chiefs will scrutinize plans for a combined trilateral offensive to drive ISIS out of its Syrian capital, Raqqa.
4. How to translate their three-way collaboration for defeating ISIS in Syria into a combined effort against the same foe in Iraq.
5. If they are able to hammer out accords in Antalya, the three generals will consider how to apply them to managing the Syrian army, which is now fully under Russian command.
6. In the event of their failure to reach terms for US-Russian-Turkish cooperation in Syria, the three army chiefs will seek understandings on dividing Syria into sectors. They will determine which sectors are to be ruled by US forces and out of bounds to Russian forces, and which will be placed under exclusive Russian control and barred to American intervention.
DEBKAfile’s military sources describe this unique rendezvous as the most important US-Russian military meeting since Donald Trump took office on Jan. 20.
The three generals are most certainly working with open lines to their presidents - Gen. Dunford to President Trump; Gen. Gerasimov, to Vladimir Putin; and Gen. Akar, to Tayyip Erdogan. If they succeed in pulling off deals for working together, with their presidents’ endorsement, Trump will have achieved his oft-repeated target of teaming up with Moscow for eradicating ISIS.
Putin, too, will have chalked up an historic diplomatic and strategic feat. For the first time since the end of World War II, and after years of cold war, the Russian and American armies will come together to fight a common enemy, namely radical Islamic terror, and create an umbrella for the Russian military operation to branch out into Iraq.
Erdogan will also come out ahead of the game. Turkey and its army will become strategic partners in determining Syria’s future and fighting ISIS. And Barack Obama’s departure from the White House will have marked the start of Turkey’s ascent to regional power status ahead of Iran.
http://debka.com/article/25954/Epic-US-Russian-Turkish-military-summit-on-Syria