Economics of the standoff between Turkey and the Netherlands 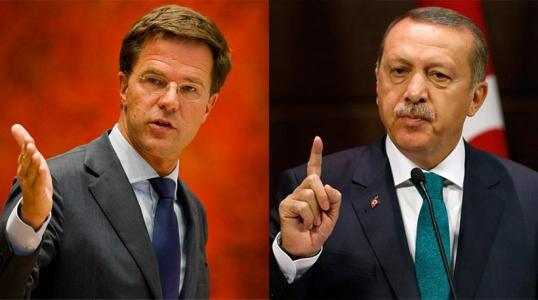 By Altay Atli
As the diplomatic squabble between Turkey and the Netherlands continues to fester, concerns are raised about whether — and to what extent — the tensions will harm bilateral relations, particularly in economics where the two countries have robust trade and investment connections.

For Turkey, the Netherlands offers a large and expanding export market. Trade between the two countries has roots in the 17th century when the Ottomans exported wool and cotton (later tobacco as well) to the Netherlands and imported clothes and linen in return. Commerce between the two countries remained strong into modern times; in 2016 the bilateral trade volume was US$6.6 billion.

The Netherlands is the 10th largest export destination for Turkey, and perhaps more importantly from the Turkish perspective, it is also a fast-growing market. Last year Turkish exports to the Dutch market amounted to $3.6 billion, against $3 billion in imports. And while the annual increase in imports was 3.4%, exports expanded much faster, at 13.8%. For the Turkish economy, which is suffering an acute current-account deficit, the increasing trade surplus with the Dutch is a precious commodity.

On the other side of the equation, Turkey is and has always been a favored destination for Dutch investment. A process that started in 1930 when the Dutch company Philips set up shop in the newly established Republic of Turkey has reached new levels since then, making the Netherlands by far the largest source of foreign direct investment in Turkey today. According to data by the Turkish Central Bank, Dutch investment stock in Turkey was $22 billion in 2016, compared with $11.2 billion in US investments in second place, and $9.8 billion from Austria in third place.

Turkey is home to 2,700 companies funded by Dutch capital. This figure includes those transnational companies registered in the Netherlands for legal and tax-related purposes. This sizeable Dutch involvement in the Turkish economy benefits both sides. For Dutch multinationals such as Unilever, ING Bank, Philips, Perfetti, Royal Dutch Shell and Philip Morris, Turkey is not only a favorable production base but also a lucrative market and a trading and logistics hub for access to the Middle East and North Africa, Balkans, Caucasus and Central Asia. More Dutch investment is set to come to Turkey, such as the recent purchase by Vitol Group of the Turkey-based fuel products distribution company Petrolofisi for $1.47 billion. Investment needs a stable political climate, and the diplomatic spat between Turkey and the Netherlands doesn’t help.

It is also worth nothing that while the amount of Turkish investment in the Netherlands is considerably smaller, there are several large Turkish firms that have set up subsidiaries enabling access to the larger EU market.

For the past week, Dutch pundits have been commenting that Turkey is more dependent on the Netherlands, so possible sanctions imposed by Ankara would only mean “shooting themselves in the foot.” Turkish authorities have imposed political sanctions over the Dutch government’s refusal to allow Turkish ministers to meet with members of the Turkish diaspora there, including halting high-level political discussions between the two countries and the closing of Turkish airspace to Dutch diplomats. But Ankara has carefully ruled out economic sanctions. Turkey’s economics minister, Nihat Zeybekçi said: “If we take these steps, both sides would be hurt.” Ömer Çelik, minister of EU affairs said the Dutch business community, which is “investing in Turkey, doing commerce and generating employment” is “certainly not a part of this crisis,” and “Dutch investment in Turkey is by no means under risk.”

Economic sanctions between Turkey and the Netherlands don’t seem likely at the moment, but longer-term threats remain. First, even if no sanctions are imposed, the significant loss of confidence caused by recent events will take a toll on bilateral economic relations for some time.

Second, the sizeable Turkish diaspora in the Netherlands, as well as the relatively smaller Dutch community living in Turkey, will face uncertainty, and this will have an economic impact too. An estimated 400,000 Turks live in the Netherlands, according to a diaspora association, and there are 25,000 businesses with Turkish owners, most of them smaller enterprises. Many of these companies are doing business with Turkey, and they are negatively affected by the current dispute between the two governments. So is the much smaller Dutch community in Turkey. But it is equally active in the economy, especially in the tourism sector. Declining tourist numbers will hurt Turkish and Dutch operators alike, and it might take some time to recover to pre-crisis levels of business.

Third, the diplomatic spat is likely to have a negative effect on efforts to revise the Turkish-EU Customs Union. The union, which took effect in 1996, is outdated, failing to catch up with the requirements of today’s global trade. Ankara and Brussels had begun talks to improve the deal, but the current circumstance is likely to overshadow attempts based on economic rationality.

This week Turkish football team Beşiktaş played the Greek side Olympiakos in the European cup. The Turks won 4-1 helped by two goals from Ryan Babel, the Amsterdam-born Dutch striker. Turkey and the Netherlands have links that are closer than many realize, and it will benefit both to keep them intact.