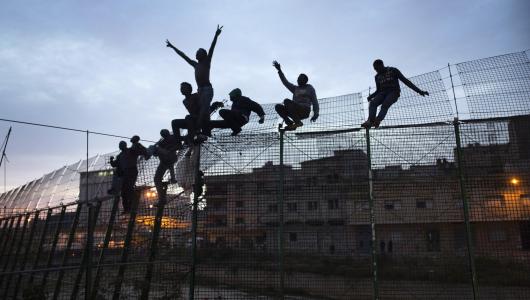 Europe "cannot escape history and geography", reminded Maltese prime minister Joseph Muscat, whose country currently holds the EU rotating presidency.
He admitted that European leaders were "looking for ideas" on how to address the challenges around the Mediterranean.

Opening the conference, alongside Muscat, former Italian prime minister Enrico Letta pointed out that economy, politics, foreign policy, development and human rights were "all linked, not exclusive" when it came to defining a neighbourhood and migration strategy.

He said that the EU needs a "delivery-based roadmap", not a "business as usual approach", as well as true "European leaders" to make decisions rather than "champions of scapegoats".

Discussion by experts during the conference - held under Chatham House rules, by which speakers cannot be quoted by name - showed that it will not be an easy task.

Lagging investment
While the assumption that the EU is a normative power has vanished, the bloc's priority is now neighbourhood stability, although the right balance between stability and democracy is yet to be found.

Reconcile both aims might be to do more to build local communities, grounds on which local governance can be improved and moderate opposition encouraged.

For the EU and its southern neighbours, the key aspect is to achieve economic progress and financial cooperation. Without it, one participant said, "you are jeopardising the future and make it more difficult to address migration".

Another speaker noted that Northern Africa is going through an industrialisation process and could become "Europe's Mexico", producing goods for Europe to be sold through trade agreements.

But the region is still lagging behind in terms of investment. Private sector investment remains below 15 percent - compared to around 30 percent in the EU Eastern neighbourhood.

Foreign direct investment is also down 50 percent, compared to 2008, due to the crisis and the consequences of the Arab spring.

The consequence of lower investment combined with a growing population is that even with economic growth, a gap is growing between available capital and the capital needed to grow the economy.

Long term benefits
One of the EU's main tools to foster economic activity and better relations with their neighbourhood has been the so-called deep and comprehensive free trade agreements. DCFTAs, such as those signed with Ukraine or Georgia, are under discussion with Morocco and Tunisia but have made little progress.

Participants pointed out that DCFTAs are relevant as a policy tool only if the EU's neighbours want to join world markets and do it through the EU.

So far, the EU has been waiting for potential partners on the Mediterranean's southern shores to set out their goals, the question now is whether there is a genuine demand for what the EU is offering.

Their benefits can only be measured in the medium and long term.

Trade agreements with the EU are a risk for local agriculture, as well as a potentially disruptive change for the public and private sectors.

However, migrants coming to Europe are often unqualified and unprepared for the European labour market. Skilled African migrants tend to go to the US and Canada, rather than the EU.

To smooth the transition in the southern neighbourhood the EU should increase the skills of their citizens and develop projects to attract African students, giving them a possibility to live and work in the EU for several years before going home.

In the meantime, with an entire region destabilised by conflicts, fragile political transitions or lack of social and economic progress, Europe has to face the urgency of migration flows through the Mediterranean.

Conference participants noted, crossing from Libya to Europe is cheaper, easier and more dangerous than it was one or two years ago, as EU policies to reduce flows do not mean that smugglers networks have been stopped.

Transversial issue
Today, 90 percent of people landing in Italy arrive on NGO and EU rescue boats. Smugglers embark more people at lower prices, knowing that 12 or 15 miles off the coast migrants will be rescued.

But when migrants are not spotted by NGOs or EU navies, the risk of death is far higher as smugglers no longer even drive the boats.

As the conference made clear, migration is "a transversal issue": it starts long before migrants cross EU borders and it ends long after. It's a matter of foreign and integration policy, as well as an issue of controlling borders.

The challenges are difficult and wide-ranging. Faced with a worried or hostile public opinion, the EU would need to do more to teach about them, said Elvire Fabry, from the Delors Institute.

But EU leaders have little time to act.

"Our political system is about to crack because of the perception" that migration is changing Europe, warned former Polish foreign minister Radoslaw Sikorski at the end of the discussions.

Migration and how it is managed is "what will make or break the European Union," he added.