Skip to main content Skip to search
Secondary menu
Home » Could Israel be a new player in the Cyprus talks?

Could Israel be a new player in the Cyprus talks? 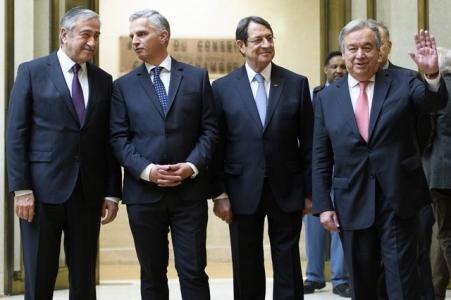 Barcin Yinanc
The window of opportunity to find a permanent solution to the Cyprus problem is closing – unless some players step in and stick their hands in to keep the window from closing completely. One interesting player could be Israel. A Cyprus peace deal would speed up Israel’s project to provide gas to Turkey, the new Israeli ambassador to Ankara said last week.

“A Cyprus solution will make life easier for all,” Eitan Na’eh told reporters during a briefing in Ankara, noting that a deal would be a win-win situation for everyone.

He was referring to exporting gas from the Leviathan field off its coast following a discovery in 2010.
Na’eh was appointed to his post in December 2016 in an important sign of the normalization of relations between Turkey and Israel.

But if we had Googled the words “Israel, Cyprus and energy” prior to December, we would have come across news stories about the energy alliance among Greece, Cyprus and Israel.

“Birth of a Geopolitical Bloc: The Israel-Greece-Cyprus Axis,” reads the headline of an article published on January 2016 in Israeli paper Haaretz.

Sub-headed “The proximate cause may be natural gas, but the ultimate cause of the new alignment is Turkey,” the article includes a picture showing Greek Cypriot President Nicos Anastasiades, Greek Prime Minister Alexis Tsipras and Israeli Prime Minister Benjamin Netanyahu after a meeting in Nicosia with big smiles on their face.

Just a few months ago in December 2016, the energy ministers of the three countries met in Jerusalem and decided to “push for a pipeline to Europe,” bypassing Turkey, of course.

Then again, just a couple of weeks before that meeting in Jerusalem, Israeli Energy Minister Yuval Steinitz informed the press that technical delegations from Israel and Turkey had begun discussions on laying a gas pipeline to Turkey.

While Israel opted to cement its relations with Cyprus and Greece to counterbalance Turkey, everyone familiar with energy issues knew that a pipeline via Cyprus to Turkey is much more feasible than the one going to Greece via Crete.

The fact that following normalization with Ankara, Israel would opt again for the most feasible project, the one with Turkey, should not come as a surprise to Greece or Greek Cyprus.

But Israel’s choice does not necessarily mean a lost case for the Greeks and Greek Cypriots. On the contrary, they can be part of a win-win scheme if only they had the political will to solve the Cyprus issue.

Perhaps Netanyahu might use the relationship he formed in the past with Anastasiades and Tsipras to this end. So perhaps after all those years, we might see a new player which could act as a push factor for a solution. Will Netanyahu succeed if he takes such an initiative? That’s not clear. Will he take such an initiative? I don’t know.

What I know is that the Cyprus talks have come to a stage where outside players need to step in to avoid failure.

One such player is the United States. “Washington should look to the Middle East not from its east but from its west,” a foreign diplomat told me. Instead of seeing the Middle East only as a source of trouble with all the fighting in Iraq and Syria, the diplomat familiar with the region referred to the change that would happen in the paradigm if there was a solution in Cyprus followed by multinational energy cooperation that would involve all countries from Greece to Egypt and Turkey to Jordan.

The fact that U.S. Secretary of State Rex Tillerson spoke to Anastasiades last week could be a good sign.

Tillerson must know “one or two things on energy,” and let’s not forget that last December, a consortium consisting of Qatar Petroleum and ExxonMobil, the multinational oil and gas corporation Tillerson ran as CEO from 2006 to 2016, won drilling rights to Cyprus’ plot 10.

Whether thanks to Tillerson the Trump administration will dedicate some of its energy to Cyprus is anybody’s guess. What is certain is that if those with leverage don’t intervene soon, the Cyprus talks will collapse.

Anastasiades started his election campaign too early in sabotaging the Cyprus talks, while the Tsipras government has been a nuisance factor rather than a helping hand.

If even Anastasiades and Turkish Cyprus’ Mustafa Akıncı, who are seen to be the most pro-solution leaders, fail to solve the problem, no one should be surprised to see the Turkish side start working on how to move ahead in the absence of a solution.
http://www.hurriyetdailynews.com/could-israel-be-a-new-player-in-the-cyprus-talks.aspx?pageID=449&nID=110506&NewsCatID=412