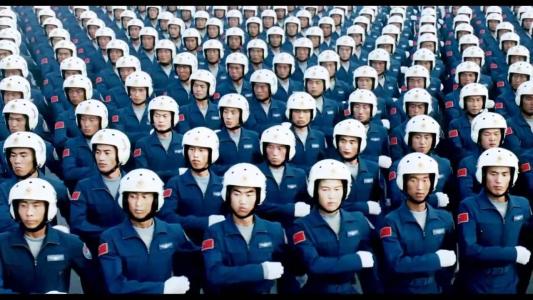 The initiative is reportedly part of China's "One Belt, One Road" campaign. Chinese President Xi Jinping announced in 2013 that the country would invest in historic "Silk Road" trade routes across the continent of Asia to Europe and Africa. China has since reportedly decided to increase the presence of the People's Liberation Army (PLA) in the Indian Ocean to protect intercontinental maritime links.

"The PLA marines will be increased to 100,000, consisting of six brigades in the coming future [to] fulfill new missions of our country,” Hong Kong-based South China Morning Post quoted an unnamed military source as saying. The source added that there was also an anticipated 15 percent increase of China's navy from 235,000 to over 270,000 personnel.

China's military activity has concerned the U.S. and neighboring nations, which dispute Beijing's vast territorial claims over the South China Sea and the Yellow Sea. China reportedly began building a large port Wednesday on one of the contested islands in the South China Sea, further straining relations with neighboring countries such as Vietnam and Taiwan, which also claim sovereignty over islands in the region. Both the U.S. and Japan have recently sent large naval fleets to counter China's presence. Beijing-based naval expert Li Jie said China's latest military boost could help enforce the country's foreign policy abroad.

“Besides its original missions of a possible war with Taiwan, maritime defense in the East and South China seas, it’s also foreseeable that the PLA Navy’s mission will expand overseas, including protection of China’s national security in the Korean peninsula, the country’s maritime lifelines, as well as offshore supply depots like in Djibouti and Gwadar port in Pakistan,” Li told the South China Morning Post.

China reportedly planned to develop a naval base in the east African nation of Djibouti where the U.S. and France have already established military facilities, and dock its ships at Gwadar, a strategically located port city near the Strait of Hormuz through which it anestimated one-fifth of the world's oil flows. In addition to its physical expansion, Chinese arm sales around the world have dramatically increased with Pakistan being the largest recipient.

Defense experts estimate that China possesses the third-most powerful military in the world, behind the U.S. and Russia. The country also reportedly maintains the fourth-largest arsenal of nuclear weapons. Secretary of State Rex Tillerson, who once advocated for military force as a means of blocking China's access to disputed islands in the South China Sea, was scheduled to visit China this week in hopes of aligning Washington and Beijing's views on North Korea and its renegade nuclear weapons program.