Skip to main content Skip to search
Secondary menu
Home » Back to a crisis with Greece?

Back to a crisis with Greece? 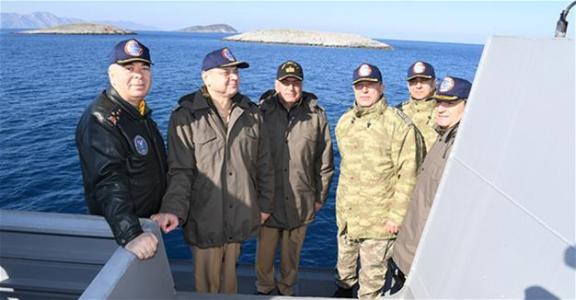 Yusuf Kanlı
It appears that there are efforts to reactivate the Kardak (Imia) issue between Turkey and Greece… Will, like the 1996 case, the islets bring the two countries to the verge of war in 2017, 21 years later?

The main opposition Republican People Party (CHP) was quick to condemn a tour around the islet by Chief of General Staff Gen. Hulusi Akar and the force commanders as an effort to contribute to the “yes” campaign for the tentatively scheduled April referendum for a set of constitutional amendments that might usher in an era of super presidential governance in Turkey. Were they? Or were they trying to send a strong message to Athens, where the high court just poured cold water on Turkey’s hopes of getting back eight soldiers who, onboard a military helicopter, fled the country to Greece immediately after the July 15, 2016, coup attempt failed.

It was whispered aloud in Ankara that the tour around the “symbolically important islets” was aimed at sending a strong message to “friends and foes” that Turkey has the land, air and naval strength to defend its rights from wherever threats might come from. Another message was apparently to remind Athens that being a friend of Turkey was in Greece’s best interest. The third and yet also very important message was Ankara’s preparedness to engage in peace in good faith as demonstrated at the Geneva talks and, if needed, in combat to defend even a small rock that belongs to Turks.

Was there a need to send such strong messages to Greece? It was not the first time Greece or any other Western democracy rejected Turkey’s extradition request. Why was Turkey so infuriated this time? Was Turkey angered by the Greek government’s explanation that it very much wanted to return the fugitive Turks but that the “independent judiciary” decided against it and the political authority had no other option but to respect the verdict? Why, from the president to the justice minister and other top Turkish government officials, was everyone crying that it was a political decision?

The reasoning of the Greek high court must be examined very carefully because I am afraid there were many lessons we might consider worth considering one day. Can any country where there is respect for law, human rights, liberties, supremacy of law and democratic governance decide to send back a criminal who might have committed a heinous act in his/her home country if there are doubts about the independence of the judiciary, a fair trial and respect for human rights in his/her come country?

Is it not a fact that Turkish prisons have been overcrowded for more than half a year because of the massive roundups of alleged members of the “Fetullah Gülen terrorist gang” (FETÖ) and those captured red-handed trying to topple the government in a military coup on July 15? Has anyone forgotten the video footage and photographs of detained generals who had visibly been badly tortured immediately after the coup failed? It is obvious that Turks, whether officials or ordinary citizens, are very angry with what the country faced on July 15. It is impossible to forget and forgive those who killed more than 240 people, bombarded the Turkish Parliament and the president’s palace. But a fair trial, respect for human rights and the right to a defense must be accorded in full to those who have committed such heinous crimes. This country should not live through the shame of extraordinary courts, torture in prisons and, worse, political sentences. Unfortunately, this is more or less what the Greek high court said or perhaps slapped in our face…

Should we blame Greece and the Greek high court or shall we look at what kind of a portrait we have been presenting to the global community of nations by the constant yelling, discrimination, alienation and jailing of coup plotters, opponents and critics en masse?

Bashing the Greeks is the easy way out. Bashing the Germans tomorrow will also be fairly easy. Yelling at the Americans might be difficult because of the high-tempered new tenant of the White House, but that might be the choice as well. We have Russia, Iran and perhaps the Qataris and the Saudis, we might think. However, at the end of the day, we may find ourselves in front of a mirror yelling at ourselves and asking where we made a mistake to deserve this complete “precious isolation.”

Greece was definitely wrong in not handing back those criminals who escaped there in a military uniform onboard a military helicopter after failing to assassinate the president of this country. It’s not just bilateral accords, international conventions also require people engaged in such crimes to be extradited. However, whatever crime a fugitive might be accused of, if there are doubts about a fair trial, independent justice and inhuman treatment, could I have sent them to Turkey if I were the Greek judge?

It wouldn’t be an easy decision to make…
http://www.hurriyetdailynews.com/back-to-a-crisis-with-greece.aspx?pageID=449&nID=109188&NewsCatID=425