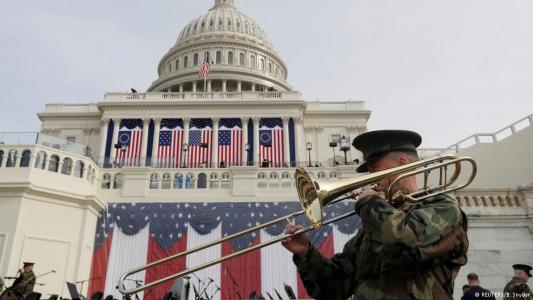 Analysis: So far, the new American president has made no effort to prove that he has a vision. He is a businessman who is out to sell the headline ‘America First.’ Whoever wants to make him offers on issues unrelated to the homeland should take a number, get in line and be ready to pull out their wallet.

If I were a chief strategic advisor to one of the 22 leaders of the Arab world – and it really doesn’t matter who the leader is – I would write a dual recommendation:
First, go out of your way to congratulate US President Donald Trump with the highest praise, and inform him that “we expect to strengthen our cooperation.” That’s what Egyptian President Abdel Fattah al-Sisi, Palestinian President Mahmoud Abbas, King Salman of Saudi Arabia and the Gulf emirates’ rulers are doing right now. Meanwhile, I would recommend that the leader prepare for tough days to come.
After all, from theof the region's leaders' point of view, there is not much to do: Trump is the 45th president, that man is here to stay, and he is intentionally creating uncertainty. And if there is something Trump has nevertheless managed to learn, it’s that there is not a single leader in the Middle East who really cares about peace between Israel and the Arab world, neither in Jerusalem nor in Ramallah, Cairo nor Riyadh.
The special envoy that Trump has appointed for our neighborhood’s affairs is his son-in-law, 36-year-old Jared Kushner. He is inexperienced too. It doesn’t seem like he has managed to make any plans or prepared to dip into the conflicts in the region.
So far, in his different interviews to the press and in his shallow inauguration speech, Trump has made no effort to prove that he has a vision. He is a businessman who is out to sell the headline “America First.” Whoever wants to make offers on issues that are unrelated to the homeland should take a number, get in line and prepare to pull out their wallet.
In Syria, for example, Trump doesn’t care if President Bashar Assad will stay or go. He is proposing to create buffer zones between the government and its opponents and surround them with security fences, like he proposed to do along the border with Mexico. The Saudis and the Gulf’s oil emirates will be responsible for the funding. That’s the way things work in the business world, take-give-pay. Nor will he allow refugees from Syria to enter his home.
The Arab leaders’ advisors should pay attention to the fact that a Jewish rabbi and two Christian clerics participated in the inauguration ceremony in Washington. The organizers did not even dream of bringing a representative of Prophet Muhammad’s religion. The new president despises them. He only mentioned the Muslims when he swore to persecute and eradicate terror. How does he plan to carry out the pursuit? The new commander-in-chief of the US Army will team up with Russian President Putin and let him do the job. These are definitely expected to be bad days for ISIS.
And what does Trump plan to do with the nuclear agreement with Iran? That’s a good question. Judging from the level of pressure in Tehran and the threats coming out of there – Trump won’t budge and the agreement won’t budge.
How will the strategic advisor in our neighborhood solve Trump’s declaration of intent to move the American embassy to Jerusalem? They have already sent messengers and relayed messages to Trump’s associates, warning of the explosiveness. The way things look now, there is an intention but there is no date. If it really happens, the Arab world’s squares will fill up. It will be the moment to set the streets on fire and to take out all the frustrations. Tahrir Square will be flooded with protestors, the Palestinians will go wild and the raging crowds in Jordan will be unstoppable.
Trump doesn’t give a damn and couldn’t care less about anyone. The kings and presidents of the Arab world should pay attention to the fact that he did it the other way around: First business and millions, and only then rulership. He already knows that they do it from the other direction: Only after entering the palace, they learn how to rake in the money.
One image tells the entire story of the huge distance: Four former presidents – Jimmy Carter, George W. Bush, Bill Clinton and Barack Obama – showed up for the inauguration ceremony at the White House. You won’t see such an image in any of the Arab world’s countries.