After the Fall of Aleppo 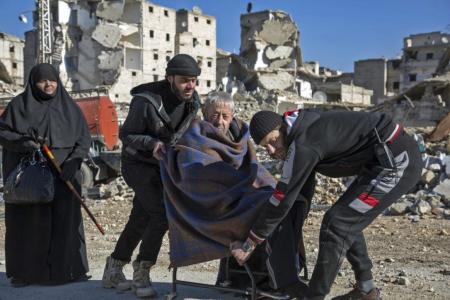 by Jonathan Spyer, The Jerusalem Post
Bashar and Asmaa al-Assad are less stressed out these days.
The battle for Aleppo is over. The Assad regime and its Russian, Iranian and Shia paramilitary allies have achieved victory.

The process of evacuation of civilians and rebels is yet to be completed. Syrian oppositionists are alleging that pro-regime militias are committing atrocities in the conquered areas. The UN accused pro-regime forces of summarily executing 82 civilians. But while important, these details cannot obscure the main point. Rebel-controlled eastern Aleppo, which held for four years, has now ceased to exist.

What does this mean for Syria and the further direction of the Syrian war?

First and most obviously, there is no longer any prospect of the Assad regime being removed by force. In effect, any such possibility ended on September 30, 2015, with the entry of Russian airpower into the war. The rebellion had and has nothing in its arsenal capable of challenging the might of a world class air force. From the moment of the Russian entry, Assad's survival was assured. With the destruction of rebel eastern Aleppo, the regime's ascendancy is sealed.

There is no longer any prospect of the Assad regime being removed by force.

Assad has now gained control over all of the major cities of Syria's center. The regime still controls only around a third of the entire territory of the country. But this includes a majority of the population, the entirety of the coast, and the capital, Damascus.

Secondly, the fall of Aleppo does not mean the immediate end of the Syrian rebellion. With Aleppo city gone, the rebellion remains in control of Idleb province in the northwest, parts of Dera'a and Quneitra provinces in the south west, parts of rural Aleppo, and isolated pockets elsewhere.

The regime side is now likely to turn its attentions to Idleb. One of the original heartlands of the revolt, Idleb Province is today controlled by two powerful Salafi jihadi militias – Ahrar al-Sham and Jabhat Fateh al-Sham.

The regime is set to present its actions there as part of the war against al-Qaeda. These jihadi organizations also dominate the rebel controlled area in the area south of Aleppo city.

But while there will be few in the west who will leap to the defense of these organizations, Ahrar al Sham has a close relationship with Turkey. This support looks set to continue.

In the North Aleppo countryside, meanwhile, the rebels operate in direct cooperation with the Turkish army, and non-jihadi groups have a more significant presence.

Ongoing Turkish support for and cooperation with the rebels in these areas complicates the picture for the regime and the Russians, and is likely to prevent the complete eclipse of the rebellion in the immediate future.

In the south of the country, the rebellion is dominated by non-jihadi groups and supported by Jordan and the west. In that area, however, Amman has in recent months reduced support for the rebels, and begun coordination with Russia. The rebels are instructed to operate against Islamic State forces only.

From an Israeli point of view, the prospect of a regime return to the border is of deep concern. It may be assumed that Israel will be seeking to use its channels of communication with Russia to ensure that the Iranian/Hizballah hope of building a new confrontation line east of the Quneitra Crossing does not come to pass in the period of regime advancement now beginning.

The regime's advances in Aleppo were achieved largely with the help of non-Syrian fighters.

It is worth noting that the regime's advances in Aleppo were achieved largely with the help of non-Syrian fighters. A major question remark remains regarding the regime's ability to re-conquer and permanently pacify the Sunni Arab-majority areas still held by the rebellion.

Thirdly, the separate war against Islamic State in eastern Syria is not immediately affected by the fall of Aleppo. IS's shock reconquest of Palmyra from the regime, even as Assad's forces pushed into eastern Aleppo, is testimony to the continued danger posed by the jihadis – as well as showcasing once again the regime's shortages of available manpower.

Large swathes of eastern and northern Syria remain outside of regime control, held either by IS or by the US-supported, Kurdish-dominated Syrian Democratic Forces.

The regime is likely now to propose itself as the right candidate for global support to defeat IS in Syria. At least for the immediate future, though, the war in the east is likely to remain largely outside of the regime's purview.

Finally, much will depend on the stance taken by the new US administration after January 20th. The current administration's Syria policy has been characterized mainly by flailing ineffectuality. Ambassador Samantha Power's tones at the UN this week – asking Russian representatives if the suffering in Aleppo didn't 'creep them out' – were a perfect coda to this.

The incoming administration contains hawkish figures who are deeply suspicious in particular of the ambitions of Iran and its allies in the Middle East. Generals Mattis, Kelly and Flynn exemplify this trend. But President-elect Trump himself has spoken of the need to coordinate with Russia in the fight against IS (and Russia, of course, is allied with Iran and Assad in Syria). Incoming Secretary of State Rex Tillerson's close ties to Russia are a further notable factor in this regard.

If the Iran-sceptic element in the new administration wins out, this may usher in a determined policy to contain the gains of the Iran-aligned Assad regime, and maintain support to anti-regime and anti-IS forces in Syria.

If, however, the desire to 'co-ordinate' with Russia against IS wins out, this raises the genuine possibility of pro-Iranian, pro-Russian forces taking the key role in the ongoing fight against IS and by so doing launching a real bid to reunite Syria under their own control.

If this latter scenario transpires, it isn't immediately imminent, given the regime's manpower problems and remaining priorities in its war against the rebels further west. But it will be a matter of concern for all regional elements, including Israel, who are watching closely the advances made by the Iranians and their allies in Iraq and in Syria in recent months.

So the fall of eastern Aleppo marks the end of any hopes of rebel victory in the Syrian civil war. But in regard to other processes under the way in the country – further regime advancement, the rebellion's survival, the war against IS – the final word has not yet been said.

Jonathan Spyer, a fellow at the Middle East Forum, is director of the Rubin Center for Research in International Affairs and author of The Transforming Fire: The Rise of the Israel-Islamist Conflict (Continuum, 2011).