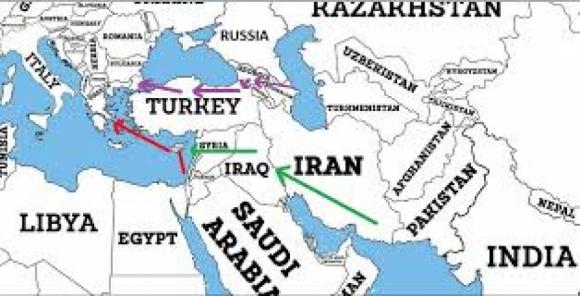 You’d be hard pressed to find someone who liked 2016. Just about every safe assumption about the future was challenged. To top the year off, the United States even abstained from a veto on the UN Security Council condemning Israeli settlements, rewriting at the last moment the relationship between Washington and Tel Aviv. It has been a roller coaster, but what has it all meant?

A Crisis is coming to its height, that’s what Strauss-Howe generation theory has already predicted all this: a Western-centered Crisis, full of stress and drama and that old Chinese curse, that will last 20-25 years. It probably began on 9/11, meaning it will probably end around 2020-2025.

During a Crisis, major events are not dealt with rationally, but emotionally: we make mountains out of mole hills, while making mountains into volcanoes. Everything feels quite wrong, even if everything is actually still quite manageable.

Thus we are provoked into bad decisions, both as citizens and as elites. We miscalculate, we overreact, and we produce more events that we overreact and miscalculate to. Invariably, this all comes to a head: some seminal event that forces us to ratchet down the tension, reduce our stress level, and act more level headed. During the last Crisis, World War II, this was a combination of the atomic bomb, the discovery of Nazi Germany’s death camps, and other major events in 1945-46.

2016 was not that year. If anything, it was a series of bad decisions that will only give way to more bad decisions. We are not at the bottom yet, but we are working hard to get there.

In at least five major democratic choices this year, voters went with the worse of two decisions, choosing to protest rather than to govern. Brexit was the first major decision: British voters, by a small margin, chose to cut themselves off from the wealthiest continent on Earth rather than renegotiate the terms of their relationship. Preferring not to try to fix things, Britons instead defriended the entire Eurozone.

Not a big win for Europe.
But Britain was not alone in voting badly this year. Italy’s own voters also shot down an opportunity to stabilize their political system and streamline their state in order to protest Muslim migrants and teach yet another political leader some ill-conceived lesson. Matteo Renzi, the 39-year-old former mayor of Florence, had gambled that Italians had been through enough government incompetence to seek genuine change; he misjudged the winds badly. Italy too still has further to fall.

Third among democracy’s bad choices was the Colombian peace deal referendum. Narrowly rejected by Colombia’s voters, the deal did not die democratically: thankfully, Colombia and the FARC went ahead and signed the deal anyway rather than let the fits of the present start up a pointless war.

Fourth, the Philippines elected a man who openly declared he would unleash the state and its vigilante allies on drug users in the most brutal manner possible. Rather than recoil in horror, voters swept him into power, where he remains popular. True to his word, his rule has brought about thousands of extrajudicial killings and, worse, the wobbling of the all-important alliance with the United States, without which the Philippines will surely end up dominated by much more powerful China.

The fifth – and arguably biggest – major bad decision was the election of Donald Trump in the United States. Once more, a small handful of Americans were responsible for the decision: the few thousands of Midwesterners whose crucial states swung the Electoral College in his favor. Much of their decision hinged on Hillary Clinton’s badness rather than Donald Trump’s goodness: the cognitive dissonance necessary to positively support Trump has been especially pronounced on Facebook comment threads. It is not good enough to demonstrate factually that Trump lies more than Clinton: it had to be shown that Clinton never lies at all to prove she was a more reliable candidate.

The hated winner.
The entire Trump campaign was the height of irrational Crisis-centered behavior: Trump campaigned that violent crime was out of control (it’s much lower than 20 years ago); that trade deals had killed manufacturing in America (partially true, but robots did just as good a job); that Mexican immigrants were overtaking the U.S. (2015 saw a net outflow of Mexican migrants); that the United States was being screwed by NATO (when NATO is in fact a powerful method of U.S. security best stocked with disarmed allies).

None of that mattered to his voters, of course, who voted emotionally; they felt, and despite their tendency to use memes to belittle the liberal opposition’s protestations of offense to Trump’s many poorly-thought-out comments, they too were focused more on their feelings than on facts.

All of these choices assaulted the values-based diplomacy of the past 25 years.

That was part of what inspired the U.S. to invade both Afghanistan and Iraq; both were ruled by abhorrent regimes that could not be defended under Western moral systems. It was a major reason to bomb Libya to support the rebellion in 2011.

It should have been a reason to support the Syrian rebellion as well, but blowback from Iraq, Afghanistan, and Libya revealed that presumed moral supremacy does not win battles. Instead, ended up being reason for Europe to open its borders to hundreds of thousands of refugees.

That instead resulted in the resurgence of right-wing power in both Europe and the United States. The sudden flood of an Other unified the right like nothing seen since World War II; Brexit was as much a vote against refugees as it was against Brussels’ obsession with pillow labeling.

Values-based geopolitics, by which great powers expand the realm of human rights and self-determination, took major blows this year. Whether they survive this Crisis at all remains to be seen.

Meanwhile, this was overall a good year for Russia, China, Iran, and Turkey.

Russia managed to reach new heights in cyberwar, influencing the American election directly. Its disinformation campaign has become so effective that “fake news” is now a real thing; Russia Today is riddled with misleading news that goes viral on a regular basis. Rather than taking flak for its carpet bombing of Aleppo and elsewhere in Syria, Moscow has instead largely been praised by Internet legions who claim the city was the capital of terrorism (and who somehow forget there is a capital of terrorism, Raqqa, that Moscow ignores).

China not only finished its island-building campaign in the South China Seas but gained a potential friend in Manila. Whether Duterte turns out to be reliable – or genuinely mentally ill – remains to be seen.

Iran held its own in Yemen and Syria, bleeding Saudi forces in Yemen while supporting militias from Aleppo to Mosul. Turkey, its future arch-rival, invaded Syria and cracked down on Kurdish forces at home, while Erdogan survived a coup attempt and looks poised to entrench his power for a long time to come. Even shooting down a Russian jet couldn’t derail Ankara’s bridge building to Moscow, who Erdogan sees as a viable partner against the Kurds, Sunni supremacists, and Europe.

In other words, states with focused strategies led by disciplined elites got things done in 2016. If there is a winner this year, it is the authoritarian.

Yet that makes sense. In a Crisis, you want clear leadership: autocrats provide that, and so in the chaos their decisions hit the mark more often because they aren’t as susceptible to the emotionalism of the time.

Enjoy it while it lasts, fellas.
This is a short-term advantage: authoritarian states always rule over weaker states than democratic ones (all other factors being equal). This is because an overly centralized states produces corruption that corrodes the functions of the state: loyalty is always more important than efficiency or intelligence. Democracies can correct for that; authoritarian regimes can’t.

So the self-corrective power of democracies and republics, in the long run, beat out the authoritarian regimes that thrive in a Crisis. That doesn’t undercut how kind 2016 was to them.

And 2017? More mistakes from democracies, surely.

Trump will take power in January; France will have a presidential election this spring. Both are huge opportunities for the emotionalism of this Crisis to get the better of democracy. Trump has already revealed he does not approach most problems rationally: Trump believed he would lose by October 2015. He was never running an organized campaign; he was lurching from odd victory to odd victory, seemingly as stunned as the media and elite were.

We should expect the U.S. to be just as irrational and unexpected as its recent campaign was: a trade war with China could give way to a nuclear confrontation over Taiwan; a joint Russo-American bombing campaign against the Islamic State could give all credit to Moscow and all blame to D.C.; a concerted pushback against Iran could give Tehran incentive to build nukes after all while completely breaking its moderates; a closer relationship with Russia could bring Georgia and Ukraine back into Russian orbit while convincing Eastern Europeans that they need a better alliance than NATO. That presumes Trump stays on a single trajectory; he could love China one week and despise it the next, depending on how Beijing treats him.

We should also expect European democracies to continue to produce bad electoral results: even if Marie le Pen fails to take power in France, surely she will be a major power broker. German nationalists may not take the country, but they will surely be normalized and primed to do so in the future. The European project will wobble, perhaps even crack fatally, in 2017, while NATO might weaken to the point where Europeans who hate and fear Russia will start building their own defense network, while other Europeans hoping for peace might decide Russia is a better bet than the United States.

As for conflicts not in strategically vital zones, they will be allowed to bleed out. Ethnic cleansing in the Central African Republic will warrant no power from the West; the annihilation of Myanmar’s Muslim Rohinhgya will be back page news, if it makes the news at all.

Yet there is some light at the end of this tunnel.

A generational Crisis requires direct experience to end. 2017 may be a rough year, but it will teach these nihilistic voters who tossed electoral grenades into the system that such actions don’t work. Perhaps they’ll give up and stay home the next vote; perhaps they’ll learn their lesson and vote maturely. Either way they will not be able to pretend they made the right choice.

The war on Fake News is a heartening change: combating the disinformation of hucksters, ad-chasers, and Kremlin spooks in a step in the right direction. Some American Republicans are already pushing back against Trump on foreign policy; should Trump behave badly enough, Congress could finally claw some power away from the executive and rebalance the U.S. government. Europeans, meanwhile, might empower nationalists just a little too much like Hitler, recoil in horror, and finally come to their sense long before a Third World War begins.

But none of these things will happen in a single year. 2017 will be a year of lesson learning. Let us hope they aren’t too painful.