‘There is hope’ for Turkey-US relations under Trump 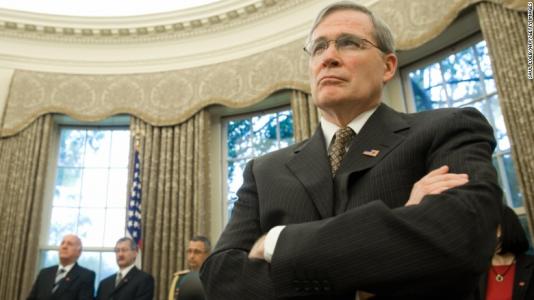 Murat Yektin
Despite being “tested” by problems and “misperceptions,” Turkey-U.S. relations are “not irretrievable” and could be fixed under the presidency of Donald Trump, according to Stephen Hadley, a former U.S. National Security Advisor, speaking after top-level talks in Ankara on Jan. 17.

Hadley, an advisor to former U.S. President George W. Bush and currently the executive vice-chair of the Atlantic Council, said improving bilateral relations with Turkey was in the interests of the U.S. in order to “reassert and reengage” in the Middle East.
Hadley also said he believed that if the Trump administration takes the opportunity to address Turkish concerns, Turkey would give a “real response.”
There were impressive names in the Atlantic Council delegation that carried out quiet but high-level talks in Ankara on the eve of Trump assuming office on Jan. 20. Along with Hadley were outgoing President Barack Obama’s former National Security Advisor James Jones and former NATO commander Frederic Hof, who has served in top diplomatic missions in the Middle East under both Bush and Obama.
The delegation spoke to business circles in Istanbul on Jan. 17, including the Turkish Business and Industrial Association (TÜSIAD), the Foreign Economic Relations Council (DEIK) and the American-Turkish Business Council. In Ankara they met President Tayyip Erdoğan, Prime Minister Binali Yıldırım, Foreign Minister Mevlüt Çavuşoğlu and Energy Minister Berat Albayrak.
I had the opportunity to speak to Hadley after the completion of all the Atlantic Council’s contacts in Turkey. His remarks actually tell it all:
* “We are in a testing time for the Turkey-U.S. relationship and I think that is attributable to a number of factors. One is the July 2016 coup attempt. I think the U.S. administration and the American people failed to really understand the gravity of that challenge to Turkish democracy and were slow to respond with unequivocal support for Turkish democracy. That was a mistake.”
* “There is also the issue of the fact that Fethullah Gülen is living in the United States and is continuing to interfere in Turkish affairs from here. Then we have the whole issue of the [Democratic Union Party] PYD in northern Syria and the fact it is affiliated with the [outlawed Kurdistan Workers’ Party] PKK. The United States has been giving support to the PYD and that is an understandable problem for Turkey.”
* “There are a lot of misperceptions on both sides. On the American side, I think there is a lot of ignorance and failure to appreciate the Turkish perspective. I think we failed to appreciate how serious the July coup attempt was and how much it understandably shocked the Turkish nation. I also think we don’t fully understand the complexity of Turkey’s position in Syria and what its concerns are with American policy.”
* “On the Turkish side, there is a lot of anti-Americanism and there is a lot of blaming America for various things that are happening in Turkey. The problem is that those two phenomenon feed on each other. Americans do not understand Turkey’s position and when they read about Turkey accusing America of various things, it only adds to the confusion.”
* “We need to address the perception problems on both sides. That is what the two governments need to do and that is also what I think the Atlantic Council can help with from the outside.”
* “I think many people in the U.S. and in Turkey are hopeful that the coming of a new administration on Jan. 20 will be an opportunity to look again at some of the issues that have divided the United States and Turkey recently. Our group will obviously go back to Washington and share what it has learned in Turkey with various folks, including the new administration.”
* “During the talks we have gotten a deeper appreciation of the nature and depth of the concerns on the Turkish side. We are at a serious point in the relationship, but my impression is that it is not irretrievable. It can be fixed if the parties work together. There is some hope that the new administration will make an effort in this direction, and I think if the new administration does make an effort, there will be real receptivity on the Turkish side.”
* “Like many people in the United States and many people in Turkey, I hope the new administration will take advantage of this opportunity not only to address issues in the U.S.-Turkey bilateral relationship but also to reengage and reassert American presence in the Middle East both diplomatically, militarily and economically. If we do that I think it will be in the American interest and in the Turkish interest.”
http://www.hurriyetdailynews.com/there-is-hope-for-turkey-us-relations-under-trump.aspx?pageID=449&nID=108706&NewsCatID=409