Skip to main content Skip to search
Secondary menu
Home » ‘The land of sleeper cells’: Why ISIS experts warn against travel to Turkey this summer

‘The land of sleeper cells’: Why ISIS experts warn against travel to Turkey this summer 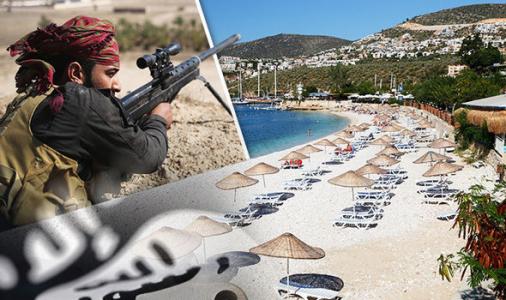 TEMPTING prices, sunshine beaches and alluring exchange rates will see Britons booking in their thousands to travel to Turkey this summer - something terror experts are claiming would be a MASSIVE mistake.

The majority Muslim nation has long attracted westerners to its golden beaches and historic towns, but there are now serious concerns tourists will become “primary targets” for ISIS in the country.

President Recep Tayyip Erdogan’s soldiers are heading to Raqqa after liberating the Syrian city of al-Bab, and for that, terrorists have vowed to strike the neighbouring nation.

Multiple ISIS publications have sworn to fight back and attack Turkey, rejoicing in killing soldiers over the border in Syria.

A new report, by a professor, and former Turkish police chief has found travelling to the nation could well be walking into an ISIS trap.

Ahmet Yayla Professor of Criminology and former counter-terrorism police chief has consistently warned about attacks in his former home country.

The attack was the first major assault on a spot famed for its celebrity and western guests - and it was chosen for a reason.

A new report has found Abdulkadir Masharipov, an ISIS fanatic from Kyrgyzstan who was later caught in Istanbul was “provided logistical and financial support in Istanbul by a large Islamic State network operating clandestinely in the city”.

And it is those sleeper cells which are causing grave concern for experts.

Mr Yayla said: “Turkish government complacency has allowed the threat to grow, as have purges of experienced counterterrorism professionals, including those after last year’s failed coup.

“As the Islamic State shows signs of crumbling in Syria and Iraq, Turkey now faces a nightmare scenario of a mass influx of Islamic State fighters into its territory."

During interrogation Masharipov allegedly revealed he was told to take his wife and children to a township in Turkey called Konya, mix into society, and await further instruction.

Turkish media reported the attacker claimed he was in touch with ISIS commanders inside Raqqa via Telegram, taking orders from a man named ‘Abu Shuhada’.

But it is the escape of the fanatic, and his network of friends who kept him living in secret after the attack which has sparked fear into the hearts of Turks.

The report states: “Thus far, the investigations into the Reina attack have revealed that more than 50 individuals directly provided support to Masharipov before and after the attack.

“Almost all of those arrested were from the Caucasus region and Central Asia, and many were Russian speakers.

“An unknown number remain undiscovered. The investigations have also revealed just how cash rich the group is inside of Turkey.

“In total, just over $500,000 was confiscated by the authorities from the network linked to the attack, a clear indication of the priority given to international operations by Islamic State decision-makers.”

Although many of this is entered around the urban cities of Ankara and IStnnul, Mr Yayla has warned it will be westerners who could be targeted, in other areas of the country.

He said: “The Islamic State will likely expand its campaign of attacks in Turkey.

“A sustained campaign of attacks by the Islamic State could lead to large-scale loss of life and significant damage to the Turkish economy.

"The targeting of a nightclub popular with foreigners suggests Western diplomatic, commercial facilities, and tourists could all emerge as primary targets.”

According to the expert the Islamic State threat to Turkey has been huge exacerbated by the purge of police officers and officials accused of belonging to the Hizmet movement - accused by the ruling AK Party of carrying out the deadly failed coup attempt in July 2016.

The country is also focused on its battle with the Kurdish PKK rebels who frequently cary out attacks in the border region with Syria.

The report states: “The Islamic State threat to Turkey has been exacerbated by a series of purges of experienced police and security officials that has seriously degraded Turkey’s counterterrorism capabilities.

“The Turkish National Police lost more than 20,000 officers in the period since late 2013, including police chiefs and officers who had spent years in the field fighting terrorism.

“All of this has resulted in Turkey losing its most experienced manpower and a great deal of institutional knowledge in the fight against terrorism as most of the newly appointed police have never worked in counterterrorism-related jobs and do not have the necessary skills and training.

Mr Yayla also argues there is a threat to the European Union, since travel from Turkey is easier than Iraqi and Syria.

Turkish authorities have carried out multiple raids on Islamic State cells, since the attack, and have denied they are losing the battle to find sleeper cells.

Officials from the AK Party have also hit out at the European Union, demanding they do more to help Turkey, than providing money for taking migrants in.

In February 400 suspected Islamic State fanatics were arrested across Turkey by police.

Turkey says at least 780 people, including 350 foreigners, remain in detention — some of whom have been convicted — over suspected links to the jihadist group.

Turkish President Erdogan said his country was determined to destroy the source of threats against it.